This is no week to stay home, my theatre-loving friends.

And, for those revellers inclined to a short summer road trip, there’s news from The Old Trout Puppet Workshop.

Consider the choices, and read on.

•On a new planet made entirely of paper, the imagination is king.

The moment for an excursion to a forest world of giant cardboard trees and paper vines and flowers is at hand. Yes, the St. Albert Kids’ Fest has returned to the banks of the mighty Sturgeon: the 38th annual edition of the international festivities starts Tuesday and runs through Sunday. 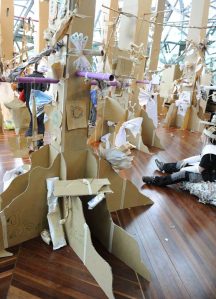 Paper Planet, the work of Australia’s Polyglot Theatre, invites kids and their larger-scale companions to populate the world with creations of their own — armed with paper, tape, and a sense of infinite possibility.

The immersive performance/ art installation piece, which defies any of the usual categories of entertainment, is one of the featured performances in the Kids’ Fest lineup. Li Liu is a glimpse into the gravity defying world of Chinese acrobatics. Honk!, a musical version of Hans Christian Andersen’s The Ugly Duckling, a droll and poignant chronicle of a misfit (it couldn’t be more topical in these parlous times), is the contribution of the St. Albert Children’s Theatre.

Dance, puppetry, music, theatre, workshops, outdoor performances, activities both free and not… detailed information about the lineup and the schedule is at https://stalbert.ca/exp/childfest. Tickets: Arden box office (780-459-1542) or Ticketmaster (1-855-985-5000, ticketmaster.ca).

•Lord of Thrones. It was before Halloween in the year 2018 that the 28th season of Die-Nasty began in the Kingdom of Pretenderos. Old Strathconia, the king was dead. Murdered! Chaos was unleashed on the world. So was a dragon. And a whole bunch of characters.

Four great Houses, in ancient deadly conflict: an epic-sized plot  — inspired by the insane complications of Game of Thrones and improvised every Monday by deluxe Die-Nasty improvisers since Oct. 22 — was unknown in advance, to the participants as well as the audience. And now, many great battles and mighty song-and-dance production numbers later, we approach the grand finale of Lord of Thrones, this very evening at the Varscona. Will there be resolution? Will the threads be woven together to create a landscape? Will the dead return to claim their subplots? Will there be smouldering gazes into the mid-distance of the future, and flashbacks to the violent past?

•It was only a matter of time before The Old Trout Puppet Workshop, the troupe that have redefined puppet theatricality in highly original ways, ventured into opera. Ghost Opera, a collaboration between the Old Trouts, composer Veronika Krausas, novelist André Alexis, and Calgary Opera, is spun from an ancient Greek ghost story. Ananke, according to Trout muse Judd Palmer (in Opera Canada), is “the ancient Greek goddess of the way nothing ever turns out the way you think it will.” Which might be a mantra for theatre generally, come to think of it. 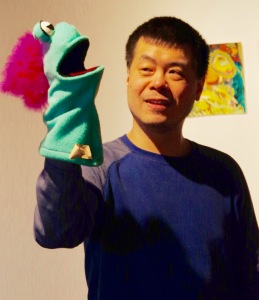 •The glamorous life: Stephen Sondheim’s 1973 musical A Little Night Music, inspired by Ingmar Bergman’s film Smiles of a Summer Night, is the work of the musical theatre company Foote in the Door. Mary- Ellen Perley’s production of this entrancing masterwork work opens Friday at La Cité francophone (8627 91 St.) and runs through June 8. Tickets: TIX on the Square (780-420-1757, tixonthesquare.ca.

•Nextfest, that innovative celebration of emerging arts and artists, opens its 24th annual edition Thursday at Theatre Network’s Roxy on Gateway: More than 500 artists, 90-plus “events” of every description, including a new mural for Strathcona.  More about these inspirational 11-day festivities, devoted to creative experiments from the next generation, soon. Meanwhile check out the lineup at nextfest.ca.