All about the playwright: Workshop West celebrates the big 4-oh

It was not one of those storied red carpet openings, where everyone knows that history is being made and dresses accordingly. But then, what little Canadian theatre starts that way?

Four decades ago, a sometime playwright/ actor who’d arrived in these parts from Ottawa (and respectable gigs in weekly journalism) to study directing at the U of A, did what any Canuck theatre artist in search of work here might do. Gerry Potter started a theatre company.

From the start there was more hopeful can-do than Cannes about Workshop West, as Potter christened the fledgling operation. What upped the ante in enterprise and risk — and scrambling ingenuity in the race against oblivion — was that, 2,000 miles from Toronto, it was a playwrights theatre dedicated to new Canadian plays.

Here’s the thing about new plays: they’re a gamble. And in 1978 in a a country which relied so heavily at the time on second-hand culture? Well, if someone had told Potter in 1978 he’d be going to a big four-oh birthday bash for his bright idea this week, he might have laughed in disbelief. Or suggested a re-write.

He rented Espace Tournesol, the grim ex-Kingdom Hall near the Coliseum that later became Theatre Network. That’s where a cluster of hardy souls saw Punch and Polly, by Calgary playwright Rick McNair, in which a woman talks to her puppet and goes mad. “We had no money,” says Potter affably. “And we didn’t have to pay the puppet.”

And so it all began, with a three-show “blockbuster opening season” as the new artistic director called it in his gung-ho program manifesto of December 1978. “We’ve given our athletes a chance to show their stuff. Let’s do the same for our playwrights!”

Somebody had to, as Potter points out. With occasional exceptions — like Hosanna (Michel Tremblay) or The Ecstasy of Rita Joe (George Ryga) — it’s not as if big Canadian theatres were laying out the welcome mat for Canadian plays or playwrights.

There was certainly a niche, sparsely populated and waiting to be filled. But Potter would find his romantic notions about “the little guy fighting for the little theatre” tested mightily. That  first season, while Workshop West’s production of One Night Stand, by Carol Bolt, was running in the Centennial Library Theatre downtown, “there I was, on the sidewalk outside, opposite the Citadel, wearing a sandwich board. Sleet coming down on me. Wayne Fipke (the Citadel general manager) looking out his window, laughing.” Potter conjures the visuals, sighs, and laughs.

The poignancy of the image sticks with Workshop West’s current artistic director, the award-winning playwright Vern Thiessen, who began his professional theatre career as the company’s resident dramaturg (and script reader) in the early ’90s and became its writer-in-residence in the Ron Jenkins regime. “It was always a writer’s theatre. That has never changed!” 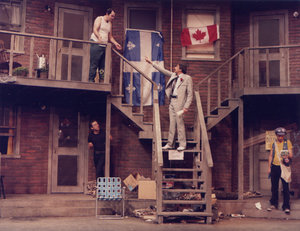 Potter supplemented the regimen of brand new plays from the West with plays from the new generation of Canadian playwrights — David Fennario, David French, Bolt, Tremblay, among them — who’d gained traction from audiences elsewhere, but hadn’t been seen here yet. By the late-‘80s, when Workshop West produced shows on the Kaasa Theatre stage in the basement of the Jube, the company was premiering homegrown (handsomely designed) sell-out hits — The Rich Man (an adaptation of Henry Kreisel’s novel), Frank Moher’s Sliding For Home and Prairie Report among them. And it was presenting others,  like Teatro La Quindicina comedies by Stewart Lemoine: When Girls Collide, Hopscotch Holiday, The Book of Tobit, The Glittering Heart.

Edmonton-born playwright Moher, who was Workshop West’s playwright-in-residence in two different time periods, was part of the debut season — as an actor. In On The Job, which ran in the  cement basement bunker of Latitude 53 (with gooseneck lamps for theatre lights) “I played the bad guy. And Paul Gross punched me,” he recalls.

As the community of Edmonton playwrights grew, Potter’s Workshop West “gravitated to the local,” surrounded with writers and scripts in every stage development, says Moher, who ran the company’s Playwrights’ Circle.

The Kaasa’s thrust stage, which “ignited a design renaissance across the board,” as Moher puts it, invited a new kind of theatrical pizzaz. In Sliding For Home, Moher’s baseball play inspired by his sportswriter dad Stan, 10 actors played 35 characters, with audience “hecklers” in onstage bleachers. Prairie Report, a zestful satire on redneck-ism, the media, and the link between conservatism and regionalism, was inspired by his time “working at Alberta Report before it went crazy,” says Moher, who wrote at various times for Saturday Night magazine and the National Post.

Reviewing the Workshop West story, Moher, who runs a theatre company (Western Edge Theatre) these days in Nanaimo, is amazed at “the sheer amount of activity — four or five full productions a season. What universe was that?” And there was a progressive thrust to the whole operation, he notes. “Gerry was pro-active about producing women playwrights.”

Says Moher, “Gerry was very good at saying Yes.” The much-awarded playwright Brad Fraser, who gave Canadian theatre one of its biggest hits ever in Unidentified Human Remains And The True Nature Of Love, might well agree. He’d met Potter as a playwright in Banff, when Workshop West was still a bright idea looking for supporters.

By the time Fraser returned from his first Toronto stint in 1984, Workshop West was up and running. And “Gerry was the only artistic director in town who showed any interest in my work,” says Fraser via email. He and Workshop West go back; “whoever was running the shop the theatre has been a great source of support for my work.”

In 1985, the theatre produced Fraser’s Chainsaw Love, “notorious for its sex and violence”  for the Fringe. “It gave me some seed money for what would become Remains.” It was Workshop West that hosted its first-ever reading, says Fraser who notes “like everyone else they demurred on producing it.” It premiered in Calgary; the Workshop West production in the 1989-90 season directed by the playwright was its third outing.

Fraser credits Workshop West “help with the writing and development of The Ugly Man and Poor Super Man, which played here (after Calgary and Cincinnati). Most recently, Workshop West produced his Kill Me Now in 2013; it has since travelled the world. Commissions from Conni Massing, Marty Chan, Ray Storey … the Workshop West archive is full of stellar names.

Conni Massing, whose play Matara (about a lone elephant and her zookeepers) opened Workshop West’s 40th season last fall, has a history with Workshop West, too. Her professional career started there, editing a collective creation It’s Your Turn To Get Up, devised by actors who were parents. Full-length Massings — Dustsluts, Homesick, The Invention of Romance — followed. And many other of her plays were developed and nurtured there before they set forth into the world. “I found a home there,” she says. “It’s so important for playwrights, solitary creature, little sad-sack satellites (she laughs) to feel at home, with a community. Vern says that the spirit of the organization is that this is a community of playwrights….”

“I wanted the playwright to feel at home with us, to be part of the company,” says Potter. “Not like companies where you never meet the playwright, and they’ve sometimes been dead for 350 years…. Actually I always imagined Shakespeare as an actor writing for his company.”

Risks? “Sometimes they pay off; sometimes they don’t,” says Potter, who left Workshop West after 15 years at the helm to pursue teaching, film, and television. “Well if you don’t fall off the bike once in a while, you won’t learn to ride….” Theatre that specializes in developing Canadian plays and playwrights is “not for the faint of heart,” he says.

When Thiessen looped back to his Workshop West roots in 2015  to run the company (he took over from Michael Clark) after seven years in New York — and as Potter puts it “took us back to our roots and the full name Workshop West Playwrights Theatre” — he got advice from predecessors in the job. “David Mann said to make it my own. Ron Jenkins said to ‘blow it up’ — in a good way. Gerry said ‘look, just keep the doors open!’”  Thiessen laughs.

“Looking back in the archives, all the artistic directors — Potter, David Mann, Ron Jenkins, Michael Clark — “really did focus on the playwright,” he says. The commitment remains steadfast. What’s changed in 40 years, as our community of star playwrights has expanded, Thiessen thinks, is that “we export more than we import.”

Fraser’s Human Remains is one of the most produced Canadian plays ever. Stephen Massicotte’s Mary’s Wedding. Mieko Ouchi’s The Red Priest,  are among notable Workshop West exports. Thiessen’s Apple has had more than 100 productions across the country and well beyond. Beth Graham, Collin Doyle … the list of notable playwrights with Workshop West credits is long and distinguished.

“The company has always been a launch pad. Sometimes rockets go to the sky, explore new worlds. Sometimes, well….” Workshop West Playwrights Theatre is, says Thiessen, “the only producing company in Canada that has ‘playwrights’ in its name.” Something to celebrate as the company hoists an anniversary glass this week.