‘Hello everybody, my name is TJ’ – 25 years of Fringe for TJ Dawe

“Hello everybody. Thanks for coming. My name’s TJ. I’m here to tell you a story….”

It’s been 25 years since an underachieving West Coast actor, fresh from theatre school, discovered something unexpected and empowering about the Canadian showbiz. It was called the Fringe; there was a string of them across the country.

And here’s the thing that changed everything for the wry, spectacled, star soloist of the Fringe circuit, it was “a world of people who almost exclusively create their own work,” performed for theatre audiences who “want something new, something that plays with them in a way they’d never been played with before….”

In the summer of 1994, TJ Dawe found himself unexpectedly with his U Vic pals touring Canadian Fringes, Montreal to Victoria. He’d been cast in Daniel MacIvor’s Never Swim Alone, directed and stage managed by David Cheoros (who would later move to Edmonton and become the director of our monster Fringe for a time). “It was life-changing,” he says,  musing on the improbability of his total immersion, and “the paths that all come back to that first tour.”

Though the Vancouver Fringe was on the same block as his high school, the 20-year-old artist who would become the highest-profile  solo star of the ever-expanding Canadian summer festival season, had never even seen a Fringe show. Dawe remembers his frustratingly lean “middle-of-the-pack” theatre school years, where he worked hard, but never felt the same visceral attachment to Shakespeare as he did to the Marx Brothers. “They don’t exactly allow you to improvise your way through Shakespeare and Caryl Churchill,” he sighs. “In retrospect it’s so clear…. I was being trained to be an auditioning actor when what I really wanted to do was to tell, to write and perform, my own stories.”

And as Edmonton Fringe audiences have known first hand — Tired Clichés arrived here in 1999, followed closely by Labrador and The Slipknot (Dawe’s breakthrough hit) — that’s exactly what he’s been doing ever since. 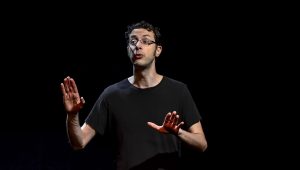 In honour of his 25th anniversary of Fringe touring, the nomadic storyteller arrives at Where The Wild Things Fringe with his most-performed show, The Slipknot, and a new show, Operatic Panic Attack. Plus, of course, his usual assortment of backstage collaborations in directing, dramaturgical, writing, including Charlie Ross’s One-Man Star Wars and One-Man Avengers, newcomer Rodney Decroo’s Didn’t Hurt, and Mark Meer’s new solo play Fear And Loathing And Lovecraft, adapted from the obscure cult novel The Damned Highway.

Dawe is typically self-deprecating.  “I didn’t study ‘dramaturgy’ formally,” he says. “For me, it just comes down to asking questions, probing…. ‘O, that’s interesting; tell me more about that’.” That’s his technique, too, when it comes to mentoring people creating solo shows. “We’re often unaware of the most outstanding and obvious aspects of ourselves. Asking questions gives them another perspective.” His view of directing is similarly open-ended: “I’m the sounding board, there to give feedback and ask questions.”

The Slipknot has all the signatures of early Dawe, with its intertwined trio of stories about iffy jobs he’s had, and the way he lets the anecdotal strings out then gradually, skillfully reels them back into to a single track. “It’s still fun to do,” he says genially, on the phone from Wells, B.C. where he’s been performing the show at an arts festival. “Not an emotionally taxing show. A lot of jokes and stories. Verbal acrobatics. A happy ending.”

Operatic Panic Attack is much different, Dawe thinks. For one thing, “it’s a straight-up story, without a weave of philosophical or theoretic threads.” The new show, which premiered at the Orlando Fringe this spring,  had its origins in his 11-minute contribution to a Vancouver autobiographical story slam, The Flame.

For another, it ventures into the “deep and emotional territory,” as he puts it, that make it hard to do, “painful but cathartic….” Dawe uses the word “healing” a lot.

“For the last 10 years the shows I’ve done are a lot more emotional, more personal,” he says. “The risks are bigger, it can be scary. But that’s what makes the pay-off greater.” In early shows, The Slipknot among them, he avoiding referring to himself onstage by name, his own or any other. As of 2008, and Totem Figures, “I used my own real name … an unwritten contract with the audience that I’m telling them what really happened, that I’m sticking to the truth, I’m exploring the real details of my life — without fudging anything to make a better story. I’m not letting myself off the hook.”

After all, that show, he says, was “a sort of overview of my life…. If I had my own Mount Rushmore or Sergeant Pepper album cover, what would be on it?”

“And that’s what I’ve done ever since,” says Dawe. “‘Hello. My name’s TJ….’ When I receive love from the audience, I know it’s for the real me.” A New York collaborator on a pop-culture parody called 6 Chick Flicks (Dawe was dramaturg), marvelled that the offstage and onstage Dawe, whether in a restaurant or a rehearsal hall, seemed exactly the same to her, in rhythm and energy. Dawe was mightily pleased.  “That’s exactly what I’m going for.”

The shows of the last decade all power up the sense of “you are not alone” in the audience. “Men in particular have a tendency to regard asking for help as a sign of weakness.”

Marathon “was me learning about my ‘social blind spot’, an inclination to exclude myself, to project non-belonging into social situations.” Burn Job, which was his discovery of ‘holotropic breathing’, “showed me how much I’d rejected my inner child.” In Medicine Dawe revealed his “intrusive visions, of a disturbing nature. A form of anxiety.”

As you’ll discover in Operatic Panic Attack, that “real me” wasn’t an opera buff when the college-age Dawe got cast in a non-singing role as a supernumerary in a Pacific Opera production of Verdi’s Macbeth. “I’d never seen an opera; I’d never been interested enough…. But the $75 seemed like a fortune to me.”

Luckily he knew the Shakespeare play from theatre school. “I could decipher a lot of the Italian in the soliloquies. It didn’t seem like the warbling nonsense opera often seems to people who don’t know it…. After it was done, I missed it.”  He got more non-singing opera gigs after that, in heavy-hitters like Carmen, The Elixir of Love, (Atom Egoyan’s) Salomé, Il Trovatore.

There it is, right in the title: panic. “I had a fling with one of the chorus members,” says Dawe of his opera debut lo these many years. “And it led to a long panic attack : anxiety about sex…. I’d had panic attacks growing up but didn’t know that’s what they were. The shame, the sexual anxiety as a university student when people are having sex a lot and I wasn’t, the anxiety about the dream of being an actor and it really was not going well: it all came to a head at 21.”

“It’s a horrific feeling; I wouldn’t wish it on my worst enemy,” says Dawe. “And it’s so isolating. I thought I was a one-in-a-million freak. And that makes the pain and stress of panic even worse…. The show is a message of solidarity to the younger version of me. Seeing someone talk about this onstage and not be booed off, or struck by lightning — it would have meant the world to me.”

Dawe, an empathetic collaborator on both sides of the border, has a long resumé of projects that involve adapting web and screen projects for the stage. He’s been in L.A. helping movie star Richard Dreyfuss fashion a one-man career retrospective for the stage. It debuted in London, with plans to tour. He’s working with Mom Truths on a small-scale stage version of their popular podcast.

Meanwhile, there’s the Edmonton Fringe, and a schedule of tight squeezes and near misses (just like yours). Dawe has two of his own shows, a high-contrast pair, to perform in Edmonton. And he’s had a hand in four other Fringe productions. “I can’t wait to see it,” he says of Meer’s Fear And Loathing And Lovecraft. “He’s such a brilliant and fluent character player…. No one but Mark could do this. With his love of horror and genre fiction, he instantly and effortlessly creates an environment….”

That’s the spirit of collaboration, generous and curious, that’s kept a soloist at the Fringe and on the road for 25 years.