A “rolling world premiere” at the Fringe: The Trophy Hunt

It’s a damn big, unwieldy country, coast to coast. And no one knows that better than theatre artists — playwrights, actors, directors, producers.

That’s partly what makes Trina Davies’ experimental initiative on the Canadian Fringe circuit so intriguing. It’s the brainchild of Vancouver-based playwright Trina Davies, well-known to Edmonton audiences for such plays as Shatter (produced by The Maggie Tree) and The Romeo Initiative (produced by SkirtsAfire Festival). The opening of Davies’  The Trophy Hunt at the Fringe here Friday is one of a rolling series of premieres of the play at the country’s Fringe festivals this summer.

Five premieres from June to September. Five different local theatre companies from Montreal to Victoria. Five different productions, with five different directors, concepts, casts. When does that ever happen in Canadian theatre?

Inspired by the story of Cecil the lion and his death at the hands of a  an American dentist/ trophy hunter, The Trophy Hunt has already had two Canadian Fringe premieres. And, says Davies, “they were apparently very different.”

The Trophy Hunt, Rabbit In A Hat Productions at Montreal Fringe. Photo by Van Ness.

The first, which happened outdoors at a “secret” location at the Montreal Fringe in June, was Paul Van Dyck’s Rabbit In A Hat production. It took the audience on safari, in a production with masks and choreographed sequences for a sort of animal chorus of non-speaking roles.

In July in Toronto, Nancy McAlear’s MadFandango Theatre production took audiences through Richmond St. West into a warehouse space. In Edmonton, where The Trophy Hunt had its origins in a “one on one” festival — one performer, audience of one — in nooks and niches at the citadel Theatre — the Broken Toys production reunites Davies with director Clinton Carew. They go back. Back to a little  theatre company, Bad Dream Theatre, in the early ’90s, with an assortment of productions. Back to Davies’ award-winning Multi User Dungeon in 2001 and West of the 3rd Meridian after that, directed by Carew.

The Edmonton premiere of The Trophy Hunt is the only production that happens in a bona fide theatre, the Roxy on Gateway. November Theatre’s production in Vancouver happens at Granville Island, with the actors forging space amongst the crowds there. In Victoria, Whitehorse’s Open Pit takes it to Fan Tan Alley, reputed to be the narrowest street in Canada.

Davies got the idea for the “rolling world premiere” from her time in the land across the 49th. Shatter, set in the aftermath of the Halifax Explosion of 1917, ran Off-Broadway in 2014, The Bone Bridge garnered her the Woodward International Playwriting Award. And Waxworks, inspired by Mme Tussaud, was recently workshopped in Massachusetts. The National New Play Network in the U.S. is a coalition of professional companies that launched the notion of serial premieres. “I wondered if anyone here was crazy enough to sign on,’ laughs Davies. “I thought it would work well for Fringes…. And I got a great response from professional artists.”

For playwrights, “it takes some pressure off the first production,” by demonstrating a range of interpretive possibilities. Ditto for audiences. And for producers, it’s an invitation to be local and embrace diversity;  means you don’t have to go to the (often prohibitive) expense of touring to gain wider exposure. 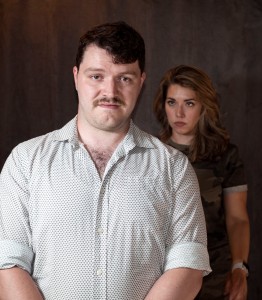 As Davies explains, the play is constructed as a trio of monologues: one belongs to the dentist, one to an outfitter/guide, and the third to a local. “I don’t consider it activist,” she says. “I don’t even consider the content to be ‘anti-hunting’…. It’s a broader piece, about the nature of human nature, how we navigate the world we’re in. Each character is, in some sense, both hunter and hunted.”