It’s show time in Edmonton theatre: what to not miss this season on E-town stages 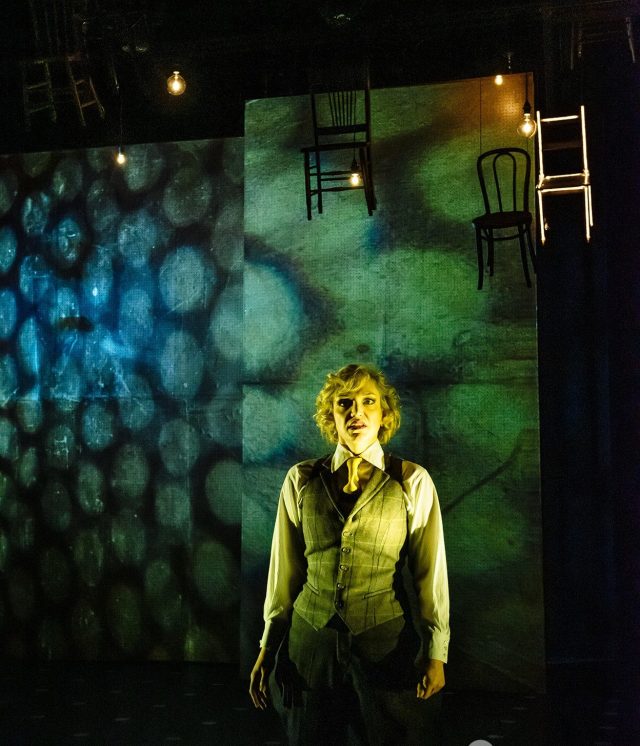 The Invisible – Agents of Ungentlemanly Warfare. Photo by Citrus Photography 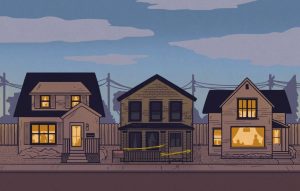 “That was what had been missing from his life all these years. His career, his city, this bonehead province. Mythic Power.” — The Garneau Block.

In Todd Babiak’s wry and funny novel The Garneau Block, reborn as a Belinda Cornish play this season on the Citadel mainstage, a vividly mismatched community of Edmonton neighbours will overcome their differences to save a ‘hood. And in the process, a kind of civic mythology will rise from that Edmonton place where low self-esteem (“an anywhere-but-here disease”) lives. “Edmonton is a real city as soon as we, as Edmontonians, believe it is real.”

And speaking of Mythic Power, there’s a quintessential demo of it, borrowed from history, in the real-life Allied brigade of kick-ass female operatives who drop behind enemy lines in France 1940 in The Invisible – Agents of Ungentlemanly Warfare. Jonathan Christenson’s new Catalyst musical arrives in February on the Maclab stage after an award-winning premiere at Calgary’s Vertigo Theatre last spring.

Power, and (maybe especially) the lack of it, find their way into stories, large and small, as our artists and their companies return to stages of every size, shape, and budget after another record-buster of a Fringe. The season is starting; what should you look forward to? Seek out? Here’s a little selection of intriguing possibilities.

Can it be mere coincidence? This is the season buzzing with the mythic power news that we’ll see not one but two musicals that pry women — six in one, seven in the other — from real-life history and and give them a story to sing about. There’s the new Catalyst musical The Invisible – Agents of Ungentlemanly Warfare (see above) with its fascinating premise and cast of female secret agents. And here’s another: Six: Divorced. Beheaded. Live In Concert, from Britain en route to Broadway. 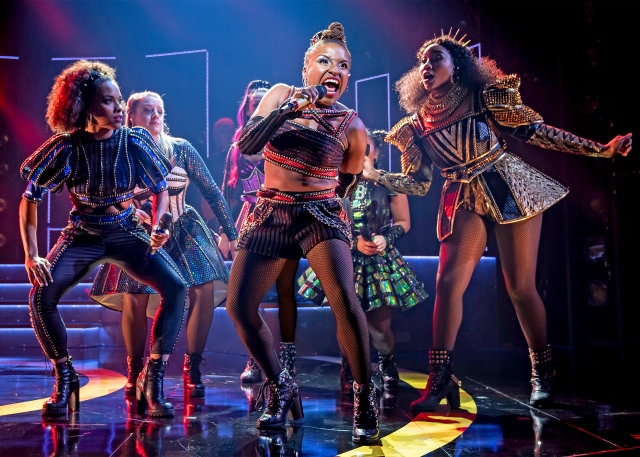 With this hotly anticipated production, the Citadel (temporary home for Broadway-bound Hadestown in the fall of 2017) hosts the only Canadian stop for the Toby Marlow/ Lucy Moss rock musical/concert — à la Spice Girls and starring the much-abused wives of Henry VIII, cutting loose from Tudor times — that had its origins at the Edinburgh Fringe, sold out a U.K. tour, and got its North American premiere at the Chicago Shakespeare Festival in May. It arrives Nov. 1 t0 24 trailing raves (and sold-out houses). 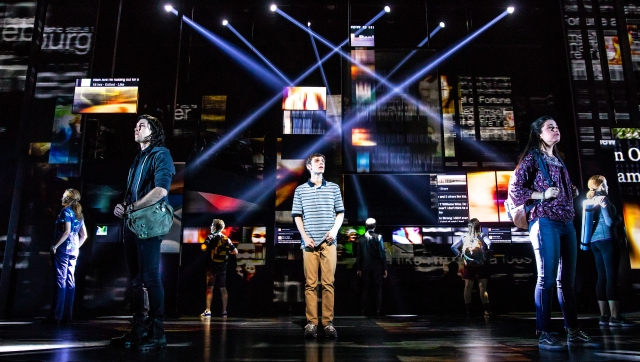 (a) Dear Evan Hansen —the Tony Award-winning Hasek & Paul gut-puncher about a maladjusted high school senior who forges a new identity for himself as a player in a classmate’s tragedy — is the highlight of the Broadway Across Canada season here. It arrives at the Jube Feb. 11 to 16.

OF AND ABOUT THIS PLACE

(a) A play (see above) by an Edmonton playwright (Belinda Cornish) adapted from a satirical but utterly affectionate novel by an Edmonton novelist (Todd Babiak, on secondment to Australia) telling an Edmonton story about a familiar Edmonton ‘hood and its idiosyncratic occupants — premiering on the mainstage of Edmonton’s largest playhouse. That would be The Garneau Block (at the Citadel March 14 to April 5), directed by Rachel Peake. It’s so Edmonton that one of the principal characters is a Die-Nasty improv regular. 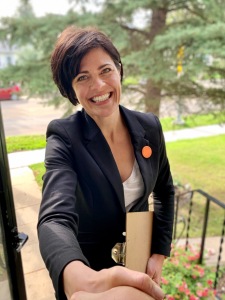 (b) E Day, a new political comedy from a playwright who specializes in setting up familiar surfaces and exploring the weirdness beneath. Jason Chinn’s latest is set in an NDP campaign office during the orange wave 2015 provincial election that made pollsters look ridiculously off-course. Suspense is galvanized by a parachute candidate, dropped in at the last minute. Dave Horak directs a large all-star cast in this Serial Collective premiere (in Theatre Network’s Roxy Series Oct. 15 to 27).

(c) After The Fire, running in the Citadel’s new Highwire series (April 18 to May 10) in a Punctuate!/ Alberta Aboriginal Arts collaboration, is the new, re-invented incarnation of Matthew MacKenzie’s black, not to say charred, comedy that originally debuted as Bust (at Theatre Network). It explores (and through Indigenous eyes) the aftermath of the Fort McMurray inferno.

(d) Dead Centre of Town, Catch The Keys’ 12th annual imaginative foray into the dark, dramatic, macabre landscape of Edmonton history, on location at Fort Edmonton. This year, the locale is the intimately spooky Mellon Farmhouse, 4 shows a night Oct. 10 to Nov. 1.

Here are three new plays from young , smart Edmonton writers that play with the political complexities attached to gender, sexual orientation, and their convoluted route through social media.

(a) Everybody Loves Robbie. In this new comedy by the startlingly versatile artist Ellen Chorley (director of Nextfest and artistic director of Send In The Girls Burlesque), a musical-besotted high school theatre couple, inseparable stars of the drama club and every festival going, have to reassess when Robbie wonders if he’s gay. Trevor Schmidt’s production at Northern Light Theatre has the added attraction of Jayce McKenzie and Richard Lee Hsi. 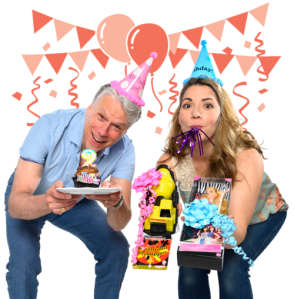 (b) Happy Birthday Baby J. Premiering in the Shadow Theatre season, Nick Green’s new comedy (Jan. 22 to Feb. 9) boldly takes a run at political correctness. A couple invites friends over to celebrate the second birthday of their kid J, whom they’re raising gender-free.

(c) In Tell Us What Happened, by actor-turned-playwright, Michelle Robb, Charlie and her two roommates manage an online support group that catalogues personal experience of sexual mistreatment. Turns out a few members have suffered at the hands of the same guy and here’s a queasy glitch: the guy is Charlie’s best friend. It runs at La Cité May 14 to 24, in a collaboration between Azimuth Theatre and Theatre Yes. 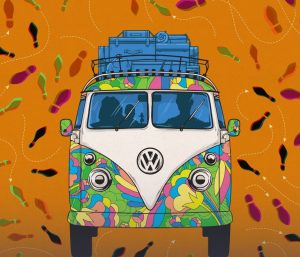 (a) All you need is…. OK, how can you not be intrigued by the prospect of As You Like It set to the music (25 songs) of the Beatles? Daryl Cloran’s 60s-style production, which broke every box office record at Vancouver’s Bard on the Beach, is at the Citadel Feb. 16 to March 16, with a new cast. And there’s wrestling.

(b) The most deranged prospect of the season — I mean this in a good way, of course — is at Theatre Network. In The Society For The Destitute Presents Titus Bouffonius, a gaggle of grotesque bouffon-style clowns  present a version of Shakespeare’s Titus Andronicus, a Bardian gore-fest of eviscerations, dismemberments, murders, cannibalism, and other anti-social activities. It’s by the star Canadian playwright Colleen Murphy, so there won’t be any polite side-stepping or shirking. Bradley Moss’s production runs Jan. 30 to Feb. 16.

(c) Pawâkan Macbeth: A Cree Tragedy, from Akpik Theatre (the Northwest Territories’ only professional Indigenous company), propels Shakespeare’s swift and brutal tragedy into the war-ravaged world of the plains Cree in the 1870s. In the adaptation by Reneltta Arluk (now head of the Banff Centre’s new Indigenous arts department), the great Okiheitlâw warrior is urged by an evil cannibal spirit, the Wihtiko, to assassinate the chief. Azimuth Theatre presents it as part of Expanse at the 2020 Chinook Series (Feb. 6 to 16).

SO IT’S THE APOCALYPSE, AND YOU’RE INVITED

(a) In her 2012 dark musical comedy Mr. Burns, a Post-Electric Play, the brilliant American playwright  Anne Washburn (10 Out Of 12) conjures a post-apocalyptic world in which the survivors are comforted by pop-culture stories recollected, told and re-told — in this case, specifically the 1993 Cape Feare episode of The Simpsons in which Bart is stalked by the homicidal Sideshow Bob. Blarney Productions and You Are Here Theatre collaborate on the production, directed by Andrew Ritchie, that runs at the Westbury Nov. 28 to Dec. 7, in the Fringe Spotlight Series.

(b) Bright Young Things dazzled at the Fringe with the bright, cuckoo  precision of their revival of Ionesco’s Euro-absurdist classic The Bald Soprano. The company, part of the Varscona Theatre Ensemble, is back (Nov. 21 to 30) with another kind of absurdism, Thornton Wilder’s rarely performed 1942 Pulitzer Prize winner The Skin of Our Teeth. It’s for ingenious director Dave Horak to figure out how on earth to track the Antrobus family of suburban New Jersey (and their pet dinosaur and woolly mammoth) through a series of timeless catastrophes that include ice, flood, and war. In its own oddball way, it’s the perfect response to surviving the declension into chaos of our world.

Here are two new Canadian plays, one by a famous writer, one by an emerging playwright — and both writers to seek out:

(a) Sexual Misconduct of the Middle Classes. Who would willingly miss the latest from Hannah Moscovitch, one of the country’s premier playwrights, especially if she said it was “the favourite play I’ve written so far….”? Just asking.  A 40-something professor, his young and worshipful student, a romance. Don’t you have butterflies already? Marianne Copthorne directs; Dave Horak and Gianna Vacirca star in the Theatre Network production (April 23 to May 10).

(b) In The Ballad of Peachtree Rose, Nicole Moeller, whose work to date (including An Almost Perfect Thing, Without You, The Mother) is witty, weighty, and complex, has created a thriller about a street kid recruited by a Canadian criminal organization. Brenley Charkow directs the premiere production at Workshop West (Oct. 30 to Nov. 10.)

With their new musical revue Get Happy! (at the Varscona Theatre in February) the Plain Janes, purveyors of off-centre musical theatre experiences, assemble songs from every corner of the repertoire and marries them to original songs by Edmonton songwriters (they’re currently scouting). The theme? “things we do in the the pursuit of happiness.”

Here’s a thing Edmonton does to get happy (and energized and argumentative): live theatre. It’s show time, my friends. Million Dollar Quartet is already running at the Mayfield. Up very soon are The Colour Purple at the Citadel and Vidalia at Teatro La Quindicina.