Hey, the theatre season has landed: a weekend on E-town stages 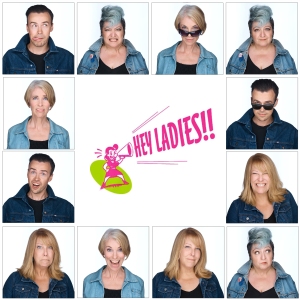 You may have noticed: the stars have aligned; the E-town theatre season is underway. This week there are musicals, plays, an original screwball comedy. There’s a staged reading of a play that’ll open on a stage later. There’s even an aerial high tea. There’s improv at a deluxe level.

The question isn’t so much ‘what on earth is Hey Ladies!!’. The question runs more like ‘what on earth isn’t it?’. The possibilities of “Edmonton’s premier comedy info-tainment, musical, game, talk show spectacular … suitable for all sexes” are pretty much elastic-sided, open-ended, free-wheeling, category-resistant.

In fact, in this Friday’s edition of Hey Ladies!!, which launches the 12th season of the show invented by and starring Leona Brausen, Cathleen Rootsaert, and Davina Stewart, with Noel Taylor, there’s a hypnotist, Sebastian Steel. There’s no dress code, but feel free to bring along your subconscious.

Hey Ladies!! is unpredictable. But there’s always music. This edition’s special guest is the startlingly versatile singer-songwriter/ actor/ playwright/ director/ acupuncturist Andrea House. And with any luck, she’ll perform songs from her new album Fire, which is a knock-out as I well know.

There’s always a DYI activity, or a craft. Where do you think Edmonton hipsters learned to reimagine their moth-eaten cashmere sweaters into original creations?

There’s always booze, and informative booze chat, this week from Scott Kendall of Bent Stick Brewery. There are games, prizes, comedy, shared knowledge and life tips on topics both arcane and popular.

•At the Citadel, the season has cracked wide open with The Color Purple, a musical with a powerful validation of the black experience and a universal story of self-discovery. 12thnight talked to the in-demand director Kimberley Rampersad, the first black woman to direct a professional production, and the electrifying star Tara Jackson, who tears into the role of Celie with heart, and urgency: meet them HERE. The 12thnight.ca review is HERE. The Color Purple runs on the Citadel MainStage through Oct. 13. Tickets: 780-425-1820, citadeltheatre.com.

•At the Varscona, the Teatro La Quindicina season (which runs counter-clockwise to the E-town norm) lands a highly entertaining finale with a revival of Stewart Lemoine’s frothy screwball comedy Vidalia. 12thnight talked to the playwright and two Teatro stars, Belinda Cornish and Andrew MacDonald-Smith about the precise and peculiar demands of screwball comedy. Check our their thoughts HERE. And have a peek at my 12thnight.ca review HERE. Tickets: teatroq.com.

•The season at Walterdale, Edmonton’s impressively ambitious community theatre, opens this week with Silent Sky by Lauren Gunderson (who happens to be the San Francisco-based playwright who wrote one of the continent’s most-produced plays, Miss Bennet: Christmas at Pemberley). 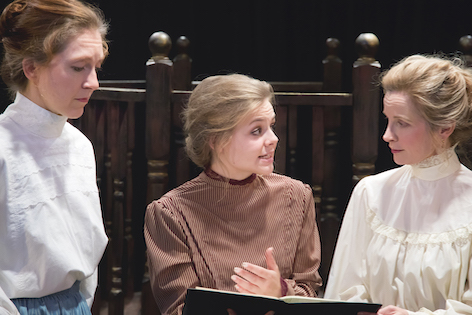 The versatile opera/ theatre artist Kim Mattice-Wanat directs the piece, which chronicles the struggles of the brilliant but marginalized turn-of-the-century astronomer Henrietta Leavitt to forge a career for herself in male-dominated science. Silent Sky, starring Lauren Hughes, runs at Walterdale through Oct. 12. Tickets: TIX on the Square (780-420-1757, tixonthesquare.ca). 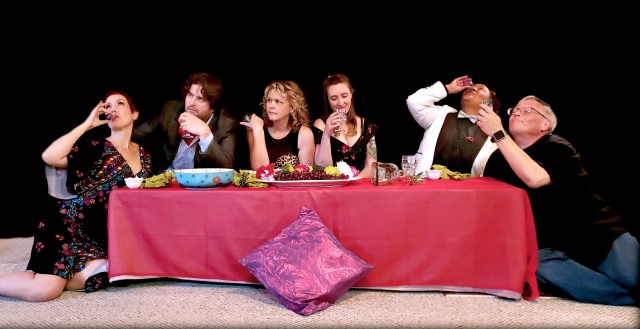 •High Tea, the season’s most elevated champagne tea service comes at us Sunday afternoon courtesy of Firefly Theatre and Circus. Tea, cucumber sandwiches, champagne arrive at your table from the air, served by the company’s anti-gravity cast of aerialists, trapeze artists and acrobats. You can even have your tea leaves read by a Spirit Sister of the Flying Séance (aka Stephanie Wolfe). It’s all in aid of Firefly’s premiere production of Inferno (and you’ll see a scene from that unique Dantesque creation). High Tea is served at the ATB Financial Arts Barns Sunday 2 to 4 p.m. Tickets: Tix on the Square (780-420-1757, tixonthesquare.ca).

•At the Mayfield Dinner Theatre, Million Dollar Quartet, there’s a whole lotta shakin goin on. Through Oct. 26 a superior jukebox musical with a hot cast continues to re-create that indelible December afternoon in 1956 when four of the greats — Elvis, Johnny Cash, Carl Perkins, and Jerry Lee Lewis — descended on a Memphis recording studio, and jammed. My 12thnight.ca review is HERE.

•This town is nuts for improv.

Rapid Fire Theatre’s lineup of improv for the weekend includes tonight’s edition of Maestro, a ruthless elimination-style show which starts with a dozen performers and (on the basis of audience of audience scoring) ends up with one. Saturday night, it’s an improv edition of the classic board game Clue, on its feet and come to life. Tickets and schedule at rapidfiretheatre.com.