Women in their 50s get sitcom Botox: The Roommate opens the Shadow season. A review. 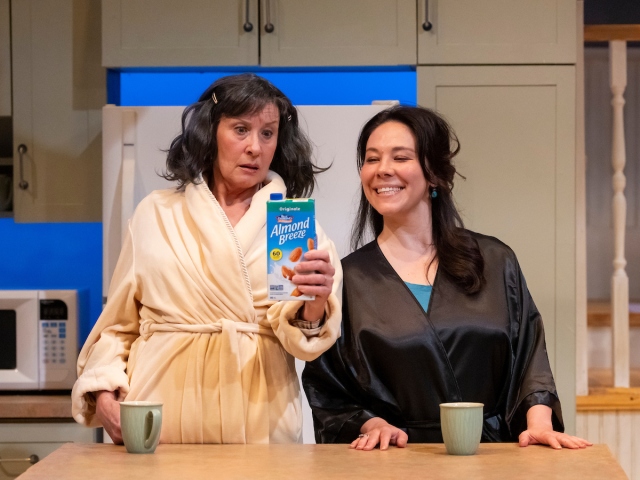 It’s impossible to know anything about the season-opening two-hander comedy at Shadow Theatre — including its title — without thinking of Neil Simon’s The Odd Couple (female version).

The Roommate, by the young (and multi-award-winning) American playwright Jen Silverman, brings together two mismatched characters sharing a house in Iowa. The only thing this high-contrast pair have in common is that they’re both women and both in their ‘50s.

Sharon (Coralie Cairns) is the local, a recent divorcée in a place that is, as she says earnestly, “known for corn. And space.” She’s advertised for a roommate, and gets Robyn (Nadien Chu), an urbanite direct from the Bronx — ex-potter, ex-slam poet, ex- (and possibly not so ex-) a lot of edgier activities.

“What do you do?” Robyn asks in response to a persistent questioning from Sharon. “I’m retired,” says Sharon. “From what?” “My marriage.” Now, there’s a Simon-esque sitcom line if there ever was one. And The Roommate is peppered liberally with others.

So why is a gay vegan pot-smoking New Yorker in the Iowa boondocks anyhow? “I thought I’d raise bees,” Robyn says, citing the salutary benefits of “restorative manual labour.”

Sharon’s main activity is phoning her unresponsive son in New York. He’s a fashion designer, and according to Sharon, certainly not gay. Absolutely not; he has a girlfriend. Who happens to be a lesbian. Iowa must be the land where time has stopped, and everyone pronounces homosexual with all its syllables intact and equally weighted. Robyn’s main activity is evading questions, and smoking, cigs and also pot.

The real curiosity of The Roommate is that, although it’s of recent vintage and by a young playwright whose archive seems full of sassy titles (Collective Rage: A Play In Five Betties), it feels somehow dated. New Yorker shocked that Iowans don’t lock their doors: it doesn’t feel very fresh as comic material. What? They make milk out of almonds? There’s something they don’t sell at the gas station. Similarly a scene where someone prim smokes dope and gets high was past its best-before date some time ago (I’m sure there’s one in Shakespeare somewhere). It takes a certain fortitude to commit to a contemporary scene where one character says “drugs” and the other counters “medicinal herbs.” Bravo Cairns and Chu; they step up, in exemplary fashion.

The idea that it’s never too late to get a sense of adventure and make radical changes in your life is, however, evergreen in theatre: the leaves never fall off. This development, with its whiffs of Thelma and Louise and (as billed) Breaking Bad, happens in a way that’s so surprising it actually feels unbelievable here. I sure didn’t see it coming.

Anyhow, in short the stars of Nancy McAlear’s lively and handsome production are up against some pretty well-trod theatrical inspirations. And they devote themselves in a selfless way to making a thinnish play generate some heart from the age and gender of the characters.

As the voluble Sharon, Cairns has a kind of tentative, daffy cordiality to her. Sharon is eager to please, forever trying to conceal that she’s shocked by what she’s managed to pry out from her new roommate. Her amusingly earnest way of processing new information in an effort to be non-judgmental will make you smile. So will her outfit (designer: Trevor Schmidt), in neutral colours and buttoned assiduously to the neck.

As the worldly New Yorker with a secret-crammed past, Chu’s performance, never over-played, shows striking restraint and smart comic timing. Her answer to Sharon’s question “what do you write about?” is a look so nuanced — tinged with a grimace, superiority and a soupçon of amusement — that seasoned slam poets everywhere will feel the sympathetic vibe in their molars.

McAlear’s production moves this pair expertly around an impressively bright, airy, antiseptically clean two-storey set designed by Daniel vanHeyst. The semi-lit choreographed scene changes are fun. And the music composed and assembled by Leif Ingebrigtsen is tied to character in witty ways.

There’s fun to be had, watching what the Shadow forces make of the play. It’s the play itself that makes you wonder.