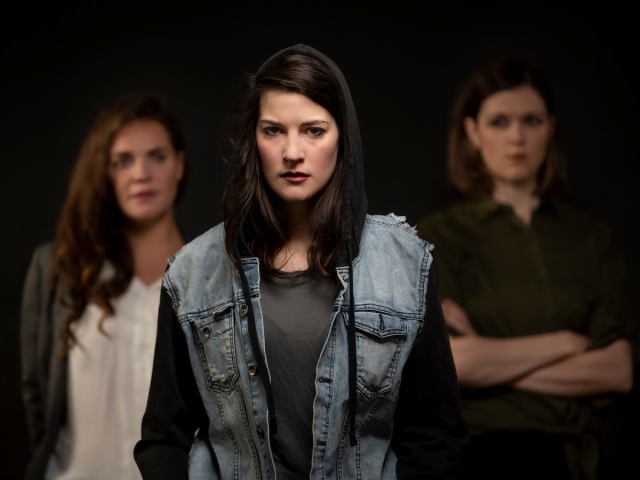 “Who are the monsters?”

That’s what playwright Nicole Moeller wonders. It’s what she’s always drawn to wonder in her plays, and the answer is never clear-cut. She asks again in the new high-speed thriller that premieres Friday to launch the Workshop West Playwrights Theatre season.

“It’s fun! It’s exciting! A criminal organization, car chases, smuggling, money!” she says of the sensational world of The Ballad of Peachtree Rose. “But underneath it asks a lot of questions…. How do we end up doing the things we do? How far are we willing to go for a new start and a new life?”

Like so many of her plays, this latest, five years in the making, was originally inspired by the news, says Moeller who came to playwriting via musical theatre and a degree in journalism. True crime: “a case about a young street kid who got involved in a criminal organization.”

For Moeller, a thoughtful and rather soft-spoken sort, the news has always been a theatrical magnet. But she gravitates to the oblique angles, the ambiguous underside views, the side players. In The Mothers, for example, which premiered at the 2015 SkirtsAfire Festival, a teenager has taken a gun to school, with terrible results. Moeller didn’t investigate the kid’s elusive motive; she wrote a play about his mother, and her life.

Moeller’s award-winning 2011 play An Almost Perfect Thing was inspired by a luridly awful 2006 news story about a young Austrian girl, kidnapped at 10, who’d escaped her captor after eight years as a prisoner in an improvised basement dungeon under her house. The public turned on her when she refused to play victim; instead she took charge of her fortunes, manipulated her image, and became a media star.

Monsters tend to come in black and white; Moeller’s preferred colour palette, as she acknowledges cheerfully, is gray. Moeller’s 2017 The Preacher, The Princess, And A Crow paints a shaded portrait of a man, both his own prisoner and jailer, who struggles against his predatory demons.

Five years ago — “it takes me a long time to write; ideas stay in the back of my brain” — the news came through again with theatrical inspiration.  And  Vern Thiessen’s first official meeting in his new job as Workshop West artistic director, was with Moeller to discuss the true crime idea that would become The Ballad of Peachtree Rose. Friday’s opening night at the Backstage Theatre is the grand finale of his last week on the job.

Typically, Moeller, the company’s playwright-in-residence at the time, immersed herself in first-person research. “I wanted to look at crime from all angles,” says Moeller. “It was not a world I understood.” She sat through trials, including the high-profile Travis Vader double-murder trial, “just to see what that world was. I spoke with lawyers, police, people who’d been victims of crime.…”

“It was good to embed myself into that world and put a face on it, try to understand,” she says. “And that also made it more difficult: What story am I going to tell? Whose story do I have the right to tell?”

Volunteer work with people who’ve been through the criminal justice system was revealing: “I can see how they’re led into that life.” What research for her new play offered additionally, says Moeller, was the chance to “to see their effect on victims. And that can really hit home…. You can see what questions are being asked and how they’re being asked. When you read, things are black and white. But if you’re there, experiencing that world, you sense a lot more gray.…”

Says Moeller, “it opened up my world to meet the people. Writing is so isolating…. I could write five plays from the research I did! And you never know how research is going to inform you.” Eventually, in the surfeit of fascinating possibilities she uncovered, she had to choose.

“I ended up focussing on two women,” says Moeller of her deliberate choice of female characters. “You don’t very often see women having those roles onstage….” Women are often victims of violence, in life and in theatre. But “women who inflict violence?” Not so much. “It creates and a complexity and a rage we need to explore,” Moeller thinks. “This isn’t girls playing boys…. Women are monsters, too.” There is violent crime in The Ballad of Peachtree Rose, and there is “victim representation.”

Peach (Alexandra Dawkins) is a kid who’s “involved in street crime but at a lower level.” Her chance encounter with Max (Laura Raboud), who works for one of the country’s notorious criminal organizations, changes both their lives.

“When I started this play, ‘true crime’ was just gaining its popularity — it raises a lot of ethical questions since it involves real people,” Moeller says. “I’m attracted to the sensational, yes. But what I like to do is draw people in, then ‘what universal questions can you ask?’” In The Ballad of Peachtree Rose, says its creator, “we meet people involved in crime. And we meet someone whose family has been affected by criminal violence.”

In rehearsals for Brenley Charkow’s production, Moeller is struck by the irony that “we’re working on a play that’s interested in exploring how you can get caught up in the world of crime. And here we are, rehearsing, and (that world) is exciting, and fun, and seductive!”

The play is set in Edmonton. “And I’d like to do that more,” says the playwright. It’s fictional, yes, but “it was inspired by something that happened in Alberta — in our own backyard. We should be doing that more. It makes the questions tougher; you don’t get to run away from them as easily….”

One of those questions is about justice. “Where is justice for someone with no options? Someone who comes from poverty and abuse?…. It’s such a hard concept, justice. So it’s good we wrestle with it.”

“I almost had more questions at the end of this than the beginning.” Which is exactly how Moeller likes her theatre.

The Ballad of Peachtree Rose