Time (a possible paradox). There’s never enough of it. It never stands still. It’s almost impossible to make a dent in it. You can move forward through it, but are you actually standing still?

The show that comes to the Mile Zero Dance season tonight for one night only is all about that. Running Piece, by Jacques Poulin-Denis for the Montreal-based company Grand Poney, is a 55-minute work for dancer and treadmill. The former (James Gnam of Vancouver’s Plastic Orchid Factory) never leaves the latter, which should give you a shudder of recognition. 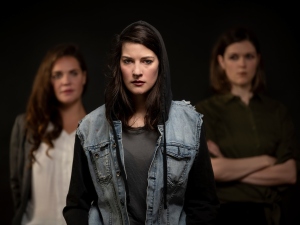 •”Who are the monsters?” Playwright Nicole Moeller wonders about that in her new thriller The Ballad of Peachtree Rose, bringing car chases, illicit money, smuggling, an high-speed criminality, to the  Workshop West season tonight at the Backstage Theatre (where it runs through Nov. 10. Tickets: TIX on the Square (780-420-1757, tixonthesquare.ca). Like so many of Moeller’s plays, this one was inspired by the news. 12thnight.ca had the chance to talk to her in this preview. You can check it out here.

•At La Cité francophone, you’ll meet beleaguered Gordon, whose life is unravelling to a soundtrack of scratching and chewing, a home invasion by vermin and a yard invasion by insect forces. Will an obsessively regular routine by day save him from desperation by night?

Simon Bracken and The Mourners, The Particulars. Photo by Dahlia Katz

The show is Matthew MacKenzie’s black comedy The Particulars. The Punctuate! Theatre production directed by the playwright returns from a hit Toronto run for a two-night run (tonight and Saturday). Tickets: TIX on the Square (780-420-1757, tixonthesquare.ca). 12thnight.ca talks to the playwright in this preview.

•At the Varscona Theatre, two mis-matched roommates, both women and both in their ‘50s, continue to resolve their differences in the quest to change their lives. Jen Silverman’s comedy The Roommate opens the Shadow Theatre season; Nancy McAlear’s production, starring Coralie Cairns and Nadine Chu, runs through Nov 10. Tickets: 780-434-5564, shadowtheatre.org. 12thnight.ca talks to the playwright in this preview. Read the 12thnight review here. 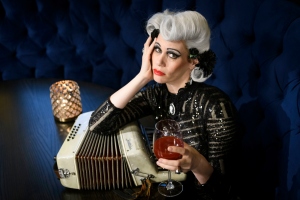 • Come to the cabaret. Baroness Bianka sips her last suspiciously red cocktail this weekend. Saturday is your last chance to find out if you’re her type: that’s when Northern Light’s production of Baroness Bianka’s Bloodsongs, directed by Trevor Schmidt, turns off the i.v. 12thnight meets the star Kristin Johnston in this preview. Have a peek at the 12thnight review here.

•In six days during the Blitz, the darkest days of World War II, Noel Coward dashed off a new comedy poised on the threshold between the dead and the living. Coward, a blithe spirit himself, said of Blithe Spirit “I knew it was witty, I knew it was well constructed and I also knew that it was going to be a success.”

Comic chaos is unleashed when a highly eccentric medium, Mme Arcati, inadvertently introduces a deceased first wife into the urbane household of the second. Novelist Charles Condamine thereby finds himself in a marital predicament; is he, as he points out, an “astral bigamist?”.

That’s the frothy comedy that opens the theatre season at Concordia University of Edmonton. Glenda Stirling directs the student production, which runs tonight through Sunday, and Nov. 8 to 10 at Concordia’s Al and Trish Huehn Theatre (7128 Ada Boulevard). Tickets: TIX on the Square (780-420-1757, tixonthesquare.ca) or at the door.