“I’m not the man I was….” A new Christmas Carol at the Citadel. A review Front-rack anything in the colour red: “red at the primary point of visual contact increases sales by 5.4 per cent.” This retail wisdom comes courtesy of Mr. Ebenezer Scrooge, whose orders come with an OR ELSE attached.

In the Citadel’s big, music-filled new $1 million adaptation of A Christmas Carol, unveiled officially on the Maclab stage Thursday, it’s 1949. And Mr. Scrooge is now the wintry, steely-eyed owner/ boss of a department store, Marleys, where the profit margin is both cradle and manger, and firing offences are invariably the daily special. Even on Christmas Eve.

By the Edmonton playwright David van Belle and directed by Citadel artistic director Daryl Cloran, this new adaptation of Dickens’ evergreen 1843 novella steps bravely forward as a successor to a best-seller: Tom Wood’s beloved Victorian version of 19 Yule seasons standing. And it’s witty about this re-location in space and time.

In the first scene, we see Mr. Scrooge (Ted Dykstra in withering good form), kicking out a cluster of carollers decked out in Victorian finery from the previous incarnation, and singing seasonal multi-part harmony: “Get away!” he snarls. “Dressed up like it’s Old-Timey London!…. You look ridiculous!” Yup, it’s the most wonderful time of the year, as another song puts it.

You could, I think, imagine Dickens’ tale of a frozen soul rescued by ghostly intervention from solitary damnation — at the last possible moment on Christmas Eve — playing in any era. OK, with the possible exception of the medieval period, bad idea. But in the late ‘40s early ‘50s, of the 20th century not the 19th, Scrooge’s journey towards human interconnectedness comes with its own look, and very familiar secular songbook, its own sense of irony and its own aura of nostalgia. Ah, and with the bonus (as van Belle’s quick-witted adaptation smartly imagines) of Scrooge’s involvement in, and exasperation with, with post-war retail.

If you’ve spent any time at any mall lately, and who hasn’t?, you might even feel an unwelcome little twinge of sympathy at the outset for the stony-hearted man we meet, hardened by years of bean-counting and bustle at the shrine of consumption in the “hap-happiest season of all”  (responsible for 27 per cent of profits, fyi). The look Dykstra gives the obligatory in-store Santa would congeal eggnog at 100 paces. 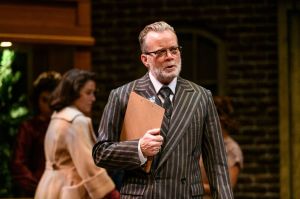 This new version of the much-loved story has a stellar asset in the performance by Ted Dykstra. Scrooge is brisk, ruthless and impatient, located somewhere on the sliding spectrum between seething and furious. His acidic sarcasm and cynicism operate in a 20th century North American idiom, thanks to Dykstra and to van Belle’s savvy, often sassy, way of re-fashioning Dickens’ language in a way that sounds right for a different century on a different continent.

Scrooge unleashes his bitter ironies on a world of “foolish people at a foolish time of year,” as he notes, with adamantine brevity. When Scrooge, for example, mocks the two businessmen canvassing for a Christmas charity, he notes that they have “enough sincerity for a career in politics.” On opening night, that sneer got a big laugh: we recognize our own screwed-up world when we hear it.

“Everyone’s on the take,” declares a man who ought to know. “Why should I subsidize the lazy?” When a bewildered immigrant family wanders by, clutching a map and hoping for a hand, Scrooge’s hackles are on red-alert: “Learn. To. Speak. English!” Charity is an “excuse to be weak.” 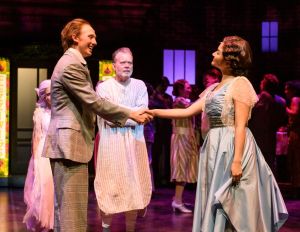 In Cloran’s production we see the signs of early-onset ossification in the younger Scrooge, played with considerable impact in Braydon Dowler-Coltman’s fine performance. We meet him on the tour of his past led by the first Ghost (Lilla Solymos), who has an unnerving, hollow-eyed refugee look about her (with shoulder pads made of burning candles) and a ghostly way of singing “I’m dreaming of a white Christmas.”

The damages of early abuse and neglect — the loss of Scrooge’s sister Fanny (Priya Narine) is actually dramatized, with props — go subterranean, under a presentable, almost genial, surface that gradually seems to rub off. The scene in which young Scrooge finally casts off his fiancée Belle (or vice versa, since she’s played with unusual feistiness by Cynthia Jimenez-Hicks) takes on the contours of the post-war world. And so does the fact that Bob Cratchit is nowhere to be seen. Mrs. Cratchit (Alison MacDonald) is the single-mother/ breadwinner who labours under the iron thumb of Mr. Scrooge. He calls her Cratchit and doesn’t even know her first name. And though the Cratchits don’t seem to be teetering on the verge of utter annihilation from poverty, they do all wear beige (costumes by Cory Sincennes). If the word “change” is the keynote of Wood’s adaptation, “consequences” takes over in van Belle’s. It’s Scrooge’s mantra, his secret of success, the weapon he uses as a cudgel on the people around him. And the seminal irony of this new version is the way consequences turn back on Scrooge, in the storytelling, in annotations by the late (very late) Jacob Marley (Julien Arnold sporting chains and a grisly fresh head-wound), and the dialogue.

That story is still present and accounted for, in all its thrilling ghostly splendour, in this new version. It’s the framing that is different. Two of the three ghosts bear some resemblance to the spectres of the old adaptation. The Ghost of Christmas Present, though, is a bizarre and amusingly hyperactive 50s hep-cat  — the spirit of showbiz perhaps? — played with gusto by John Ullyatt in a tinsel-green suit that gives him some resemblance to an outsized leprechaun. And he changes costumes and hair styles with magical mystery that’s a kick. “Music,” this energetic ghost  tells Scrooge, “is part of the whole Christmas gig, baby.”

The traditional Christmas music that seemed to emerge from the spheres in the Wood adaptation is replaced for the most part by the dreamy or jaunty, much-covered repertoire of the early ‘50s. As in musicals, characters do break into song at dramatic moments. This aspect of the new Christmas Carol might need a tune-up, in truth — not least because those moments are only occasional, in a continuing period soundtrack. It feels just a little jarring, as it currently stands, that in a scene with one of her kids, Mrs. C breaks into Have Yourself A Merry Little Christmas.

The live jazz quartet is welcome, but on opening night the sound mix was weighted rather obtrusively in favour of keyboards. And am I the only person who thinks that Holly Jolly Christmas as a grand finale to a major production should be reserved for parodies?

I’ll keep the details secret (for your own good!), but I wonder, too, if the ending doesn’t involve rather a lot of Scrooge improvising to explaining his conversion, under several circumstances where his mere presence speaks volumes. “It’s unbearable…. I see what misery I caused, how little I have to show for my life.” Luckily, Dykstra is such a charismatic performer you’ll never regret having him linger onstage.

Cavils aside, this is the first airing of a show that will invite future visits. And the period has inspired a handsome design by Sincennes, lit by Leigh Ann Vardy and dominated by a clock and a revolving department store door used cunningly by director Cloran to spill characters onto the stage. And Sincennes’s costumes, which achieve a kind of apotheosis at the Christmas party thrown by the Fezziwigs (Vance Avery, Belinda Cornish), are lovely, and fun to look at, set in motion by Laura Krewski’s allusive choreography.

In short, this new Christmas Carol has a lot going for it. Is it the start of number-less Christmas Carols Yet To Come at the Citadel? This much I can tell you: It’s cleverly written and structured, and while it doesn’t exactly underscore a story of cruel, high-stakes inequity, this tale of  transformation and the visceral need for connection does speak to our time. “I didn’t know how to be part of a family,” says Scrooge. “Some families you’re born into; some you have to find….”

A holiday tradition is a way to discover yours.

Written by: David van Belle from the Charles Dickens novella