Give yourself a festive treat: Holiday shows on E-town stages this week 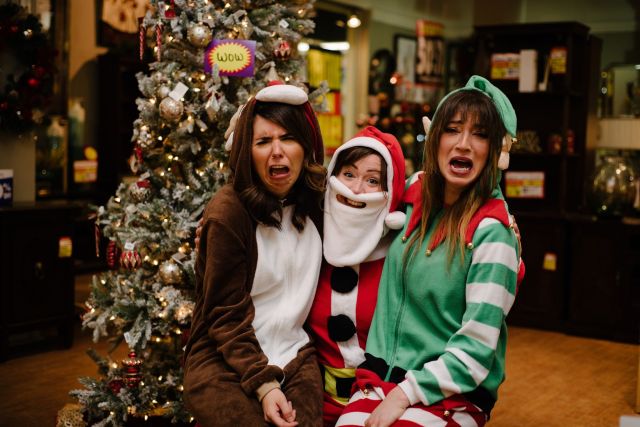 Like socks with reindeer antlers and figgy puddings, festive holiday shows are definitely not one-size-fits-all. They come in every pattern, every size, every budget from lavish to cash-strapped ingenuity. And, for that matter, every gradation of brio and shade of irony.

Edmonton theatres really step up this week with a variety to choose from. Herewith a sampling (the take-away is that there’s really no reason to be vaguely mopey at home or go full-throttle outraged in a mall to the strains of Mariah Carey).

* FOR CHRISTMAS, YOUR (FESTIVE) PIECE OF THE ROCK: It comes wrapped in the famously fractious world of the amateur theatrical. There is no higher stress level in that war zone than the small-town Christmas pageant. It’s the 10th anniversary of Whizgiggling Productions’ The Best Little Newfoundland Christmas Pageant. And once more the company, named for the Newfoundland expression that means (approvingly) “acting silly or foolish,” takes us behind the scenes for riotous Draaaahma, with a capital D.

The stage adaptation of the irresistible Barbara Robinson novel chronicles the teetering fortunes of the annual town Christmas pageant when auditions are invaded by the dread Herdmans, “the worst kids in school,” lured by the rumour of free snacks. They’re more than a little baffled by the plot, especially the business with the Three Wise Guys. But this doesn’t prevent them shouldering their way into the best parts.

•THE RETURN OF THE PANTO: Is it a play? Well, sort of. A musical? Kind of. An improv? Well, yes, to a degree. A comedy? Definitely.

A fractured fairy tale, dumb jokes for kids and dumber jokes  for grown-ups, pratfalls, an invitation to the audience to cheer and boo and sing along, giddy songs, local references, high-spirited gender fluidity.… Yes, we are talking here about the Christmas panto, a kooky Brit invention that cavorts well outside any known classification. There isn’t a holiday tradition that achieves the panto’s level of off-centre seasonal eccentricity and pizzaz.

With Cinderella, a vintage entertainment returns to the vintage theatre (the Capitol) at a vintage locale (Fort Edmonton Park). It’s an original by actor/playwright Jocelyn Ahlf, often seen at Plain Jane Theatre and Teatro La Quindicina, with original music by Erik Mortimer. They’re a panto-writing team with a pedigree (Cinderella, which premiered at the Fort in 2014, is the first of the four they’ve created). Kate Ryan directs the revival, with Bella King (Fun Home) as the much-put-upon gal whose chances of getting to the ball are sketchy. Ahlf herself plays Cinderella’s awful stepmother Madame de Pancake.

The story has E-town accoutrements. “A magical blizzard in Edmonton,” as Ryan says in her notes. “There’s a King living in ‘Castle’-downs, adventures in the Calling-‘wood’ and a ball down at the Fort!” Here’s the crux: “kids get to act like adults, and adults get to act like kids.”

•A COMEDY TROUPE DECKS THE HALLS  (and also the stage): Girl Brain, E-town’s hottest sketch comedy troupe, is at the Roxy Saturday Saturday, to shed their own special light on the peculiarities of the season. The smart, sprightly trio of Alyson Dicey, Ellie Heath and Caley Suliak are fresh from a full-house run at the Citadel’s Rice Theatre in November. Their special guest this time is stand-up comedian Brittany Campbell. Tickets: theatrenetwork.ca.

•BE MERRY: Speaking as we are of jingle bells, which know no frontiers between the disciplines, the holiday esprit de corps joins two companies, Teatro La Quindicina and Ballet Edmonton, for a three-show run hosted by Sheri Somerville at the Varscona Thursday through Saturday. Teatro’s contribution to BE Merry is the classic Plays By Children, an assortment of offerings by elementary school playwrights coached by Stewart Lemoine over the years, and performed by professional actors. This year’s assortment includes Cookies For Santa, and the evergreen favourite The Angel of Ma. The cast includes Kristi Hansen and Mat Busby. Ballet Edmonton dances seven short seasonal pieces by members of the company and artistic director Wen Wei Wang. 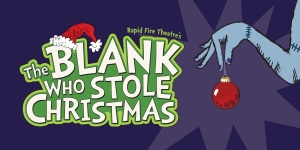 •THE BLANK WHO STOLE CHRISTMAS: Ballets have high-stepping toy soldiers. Symphonies have the Hallelujah Chorus. The Citadel has Ebenezer, he of the frozen soul. Rapid Fire Theatre, has … the Grinch. In homage to that influential figure, Edmonton’s much-awarded improv comedy company presents a play, partly scripted and partly made up on the spot, in which a different improviser arrives onstage every night in costume of their (secret) choice, and takes on the role of the villain in the high-stakes Seuss-ian narrative.

The Blank Who Stole Christmas runs at Rapid Fire headquarters (the Zeidler at the Citadel Theatre) through Dec. 21. Tickets: rapidfiretheatre.com. 12thnight talks to Rapid Fire’s Matt Schuurman, whose idea the show is, in this PREVIEW.

•YOU BETTER WATCH OUT YOU BETTER NOT CRY….If Rapid Fire has the Grinch (or an original variation on same), Hey Ladies!! has Bad Santa. The holiday edition of this unique “info-tainment,” hosted by Cathleen Rootsaert, Leona Brausen, and Davina Stewart (its creators) with Noel Taylor, includes Yule-ish games and crafts. Music by E-town’s Real Sickies. AND … the long-awaited return of Bad Santa. Hey Ladies!! runs Friday at the Roxy on Gateway (8529 Gateway Blvd).

•EBENEZER COMES TO THE CABARET: A Wonderful Christmas Carol: A Pantomime Radio Play tells the oft-told tale of the reclamation of E. Scrooge, Esq., the  career bean-counter with permafrost where his heart should be — in a different way. The show, which features improv stars Paul Morgan Donald, Davina Stewart, Mat André and Dana Andersen (as Scrooge), comes with a full brunch, at the Spotlight Cabaret in Old Strathcona (8217 104 St., in the building next to the Starbucks on Whyte). It runs Saturday and Sunday (brunch at 11 a.m., show at noon), and Dec. 21 to 24. Tickets: spotlightcabaret.ca.

•I’M NOT THE MAN I WAS…. After 19 seasons, the Citadel has a new big-budget large-cast version of A Christmas Carol, set in the late 1940s, with music to match from a live jazz quartet. Ah, and a Scrooge whose soul has been ossified by years of loveless retail and faux department store high-spirits.

Playwright David van Belle has written into the flinty Ebenezer, reigning monarch of the bottom line, an acidic wit. Ted Dykstra, who has a rarefied sense of comic timing, nails it. Daryl Cloran’s production features performances of charm and brio from Ben Stevens as Scrooge’s good-natured nephew, Alison MacDonald as Cratchit (Mrs. that is, not Mr.), Braydon Dowler-Coltman as the young up-and-coming retail magnate Scrooge, and John Ullyatt as the ‘50s hep-cat Ghost of Christmas Present (Dr. Seuss as prompted by Allen Ginsberg). Check out the 12thnight REVIEW here. Meet playwright van Belle and director Daryl Cloran here.