10 years with the Janes: Plain Jane Theatre celebrates with a new revue, Get Happy! 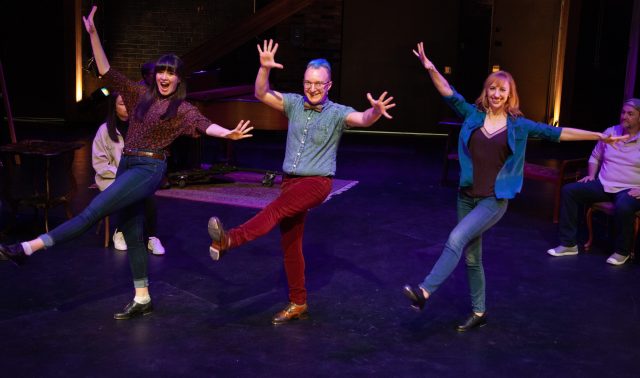 Happiness. So how’s that going for you? 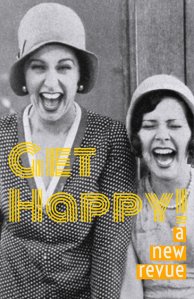 It’s the 10th anniversary of Plain Jane Theatre Company. And after a decade of re-discovering and retro-fitting hidden gems in the musical theatre repertoire, they’ve been wondering about things like that. Call it collective curiosity, naturally attached to an intriguing song list: Get Happy! the new Janes musical revue opens Thursday at the Varscona.

Artistic director Kate Ryan arrives for coffee last week clutching a fat sheaf of sheet music, and a hard-cover copy of a vintage essay collection called The Pursuit of Happiness. “It’s been a year (in the world) when it’s not a given,; happiness is something to question in our own lives,” she sighs.

The Janes ensemble, who live and breathe musicals, have been brainstorming song ideas, as they tend to do. And the ideas have  accumulated exponentially, as they tend to do in a company of triple-threats who know their musicals, but see them from different angles. As Ryan says, “it takes a village to build a Jane show; this very small company does feel like a village…. Every person in the company is an important part of the show.”

“At first,” says Ryan, “it was ‘instructional songs’, with advice. “This is how you get happy … Put On A Happy Face. That’s how we started.”

Turns out you don’t need to consult Kierkegaard or Nietzsche or Bertrand Russell to study up on  happiness. Try musical theatre. “Songwriters are musical philosophers … and throughout history they’ve reacted to happiness. You think of Irving Berlin writing Blue Skies during the Depression, or Harold Arlen writing Get Happy in 1929.…” Ryan could go on for hours, effortlessly free-associating in this vein on her favourite subject. Like her father before her (the late Tim Ryan), Ryan is a veritable song archive. And she’s a highly entertaining conversationalist. 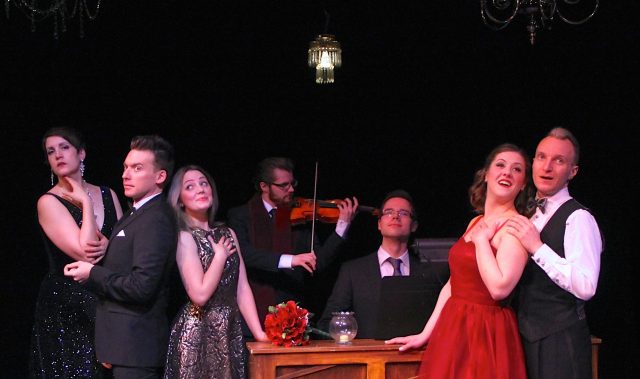 “Then we went to the repertoire of the ‘30s,” a test case for happiness under trying circumstances. Not by chance, it was a decade, as Ryan says, of “escapist musicals or wacky, wild revues like Hellzapoppin: audience participation, dancing on laps. No, really!” For their musical revue Everything’s Coming Up Chickens, the Janes borrowed a song (Through A Keyhole) from Irving Berlin’s 1933 As Thousands Cheered, in which every song is based on headlines from the newspapers of the day.

Gradually, says Ryan, Get Happy! widened its horizons from a primer with tips on walking on the sunny side of the street. “It’s about when the mind monkeys take over. Songs that tell stories about wanting joy but hitting a wall, making choices or discoveries … or taking a stand. People making discoveries — about themselves, and the world, and what unifies us? We all do share the same fears, desires, hopes. Discovery and survival.”

She beams. “Yup. We opened Pandora’s box.… Give me a happy song and I’ll find the struggle.” 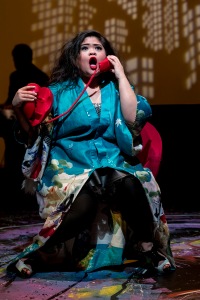 Michelle Diaz in Women on the Verge of a Nervous Breakdown, Plain Jane Theatre. Photo by Marc J Chalifoux.

It is no accident that Get Happy! includes What’s Gonna Happen, “the anxiety song” from Tootsie, the Broadway musical by David Yazbek (The Band’s Visit, Women on the Verge of a Nervous Breakdown, Dirty Rotten Scoundrels).  The Life of the Party, the number Ryan has culled from The Wild Party, a 2000 Michael John LaChiusa musical based on a poem from a 1920s artist, is a character’s too insistent protestation that she’s absolutely fine: “Who needs money? Not me. Who needs fortune or fame?” 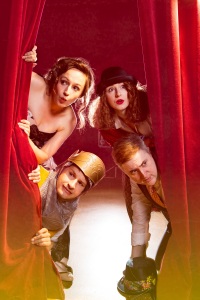 The sparkling Janes revue archive that includes Ah, Romance!, Everything’s Coming Up Chickens, Wish You Were Here: A Noel Coward Revue, and Café Wanderlust — tends to match-make songs from musicals you’ve never heard of and songs from musicals you have. And even if it’s the latter, it won’t be the title song or the 11 o’clock number. Yes, there’s a song from Mame in Get Happy!, for example. But it’s not the one you’re already humming; it’s the quirky “moon song” which proposes that the man in the moon is a lady. 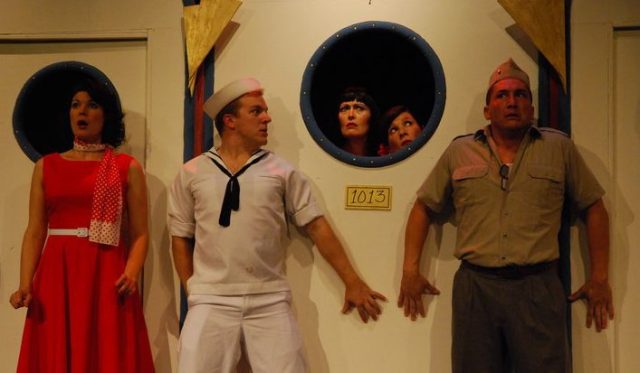 Ten years ago, a cleverly scaled-down version of a deliciously kooky 1955 Guy Bolton Broadway money-loser, Ankles Aweigh — eight actors instead of 45, directed by Trevor Schmidt —  introduced Edmonton audiences to a  new indie theatre company. Plain Jane. Ryan’s bright idea was a chamber-sized heir to Leave It To Jane, the company founded by her father. “We took monsters and celebrated all the wonderful things they had in them — songs, characters, stories,” Ryan says. 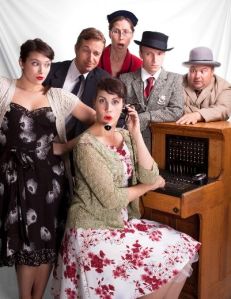 Bells Are Ringing, a 1956 Betty Comden and Adolph Green/ Jule Styne musical set in a telephone answering service HQ, was taken up by the Janes in 2011. The production, starring Jocelyn Ahlf, was inspired, says Ryan, “by its strong female characters.” 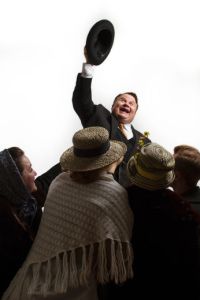 The next year the Janes revived Fiorello!, a little-known 1959 Tony winner by a team of artists (Jerry Bock and Sheldon Harnick) a lot more famous for something else, namely Fiddler on the Roof. The same thing happened with It’s A Bird! It’s A Plane! It’s Superman!, by Charles Strouse, of Annie fame. And Mack and Mabel by Jerry Herman, a lot more famous for Hello Dolly! and Mame. 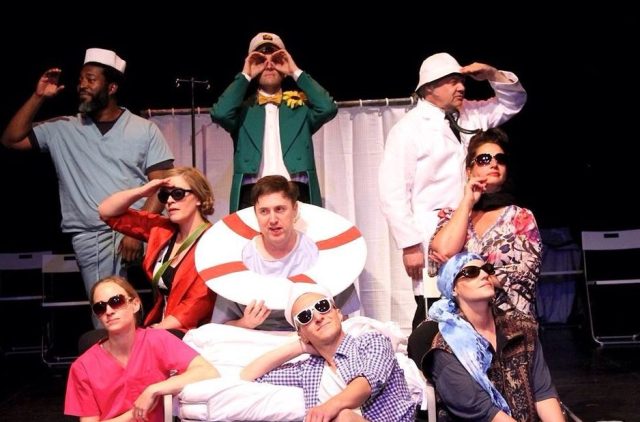 Historically, the Janes have made a point of incorporating new talent into the ensemble with each project. This time MacEwan musical theatre grad Daniella Fernandez and dancer Camille Ensminger make their Jane debut, alongside five Jane stars. Last year’s hit Sterling Award-winning production of Fun Home, directed by Dave Horak (with Ryan in the cast), introduced both Bella King and Jillian Aisenstat to Edmonton audiences. 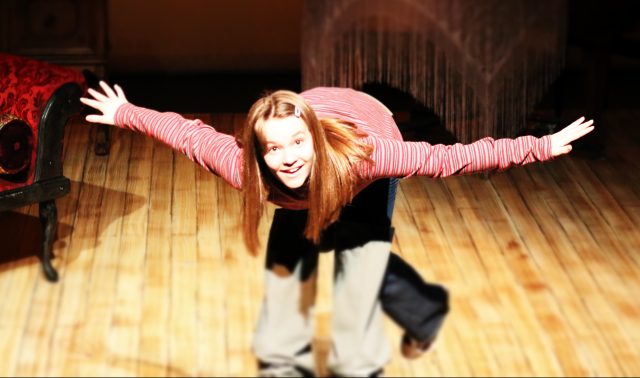 It’s in that spirit, the excitement of the new, says Ryan, that Get Happy! includes a quartet version of Stephen Sondheim’s Something’s Coming; the pulsing anthem of forward motion in West Side Story seems entirely à propos for the birth of a new theatre company, and now a new revue.

The easy route to a tenth anniversary revue, of course, is the one that Ryan and musical director Janice Flower haven’t taken. They could have picked a song from every musical from the 10-year-old Jane archive. Instead, the Janes have found themselves inundated in a tidal wave of songs that explore what it means to struggle, to quest, to be human. Ryan laughs. “Why make it easy?.”

Ryan points to Adam Guettel’s Migratory V, from his Myths and Hymns, which ponders the human implications of the formation that birds share in flight. It’s in a show about happiness that includes numbers from the Janes wish list for the future, including Grey Gardens, The Wild Party, Sweet Charity, The Happy Time (a little-known Kander and Ebb musical set in Quebec with a photographer protagonist), Most Happy Fella. Ryan pauses to consider the latter; one of its numbers, Song of a Summer Night, is in the show. “Lush and romantic. Beautiful, sad, heartbreaking and joyous at the same time….” 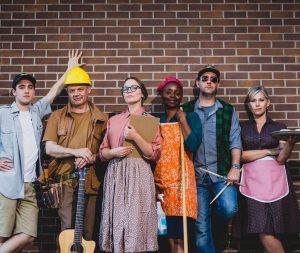 What’s next for Plain Jane? “Celebrating new work, new voices,” says Ryan. “Edmonton has so many great writers. And also keep diving into the vault of musicals from the past — there’s so much there to reflect on, to see what still resonates today, what unifies us.”

“I’ve got a garage full of chairs, so  who knows? Maybe I’ll re-invent a lesser-known Rodgers and Hammerstein musical with four actors. It’s on the list!”

Written by: Kate Ryan (and the Janes)