All you need is love: the Bard teams up with the Beatles in As You Like It, at the Citadel. A preview. 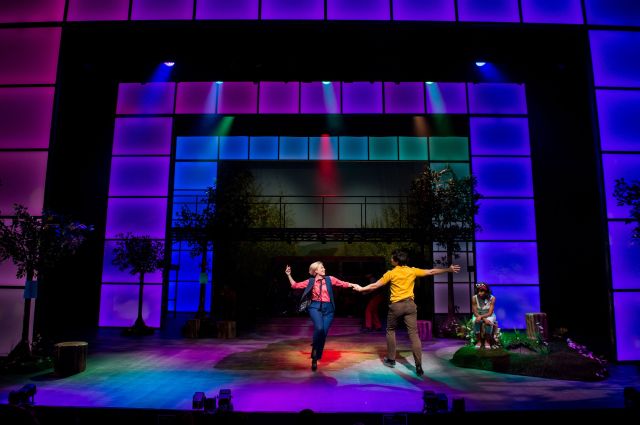 The musical rom-com that opens Thursday on the Citadel’s Shoctor stage, is the work of a starry creative team. All the world might be a stage, yeah yeah yeah, but history’s hottest playwright and most popular rock band haven’t worked together before. His people and their people don’t always connect, if you catch my drift.

I refer of course to William Shakespeare and the Beatles. Daryl Cloran’s hit 1960s-style adaptation of As You Like It is their debut outing as a team. It marries Shakespeare’s generous-spirited adventure of self-discovery and exploration of the ecstasy of love to … 25 Beatles songs. The production originated in 2018 at Vancouver’s Bard on the Beach, where it stirred up the biggest box office activity in that festival’s history, and restored the word “joyous” to the chill West Coast lexicon judging by the critical reaction.

The current production, a collaboration between the Citadel and the Royal Manitoba Theatre Centre, arrives from the ‘Peg, with a (mostly) different cast of 15. After Edmonton, there’ll be a production this spring at Chicago Shakespeare Theatre, and after that, re-cast once more, in Milwaukee Rep Theatre’s upcoming season.

It’s not that the Bard isn’t adaptable, of course. His bold, contemporary summer outings at the Freewill Shakespeare Festival attest to that. Says Cloran, “I directed a production of Love’s Labour’s Lost at Bard on the Beach in 2015, and they let me rip out half of the text and put in a lot of 1920s jazz,” he says. “And as a jazz musical it worked out really well,” and people really liked it.

Then Bard on the Beach artistic director Christopher Gaze put this idea to Cloran: “Hypothetically, if we could get the rights to Beatles songs …

“Wow.” Once you hear a proposition like that, you can’t un-hear it, as Cloran discovered. It’ll tease your brain and tickle your fancy, and generally take hold of your mental playlist. But first there’s the crazy improbability of it all: how on earth do you get the rights to 25 Beatles songs?

“It’s super-complicated, for sure,” says Cloran amiably, of a question he’s invariably asked. “Of the 25 songs we use, the rights are held by seven different organizations. The biggest is Sony, but there are small organizations, publishing companies, even individual people who own the rights to one song…. And for every production we have to go back, and negotiate all over again.” Incidentally, the rights do not extend to using Beatles’ names; there will be no Ringo in the Forest of Arden.

Cloran explains that Bard on the Beach still does all the negotiating for rights, for every production. Baroque complications attach to acquiring rights to Beatles songs, as Paul McCartney himself learned. Cloran laughs. “The only way we could make it happen, financially, is that Shakespeare doesn’t ask for a royalty!”

As for the songs, “once I started looking for connections, it was pretty quick,” he says. “The story and the Beatles music meshed so perfectly, that some of the songs felt like they were written for this play….” That’s why he could cut the text in half, he says.

Lindsey Angell and Jameela McNeil in As You Like It. Photo by Dylan Hewlett

When bright witty Rosalind finds herself in exile in the Forest of Arden, in disguise, and conceals her growing affection for Orlando, You’ve Got To Hide Your Love Away is a natural, as Cloran points out. “That worked so well.” When the melancholy forest philosopher Jaques arrives back at camp exulting to his fellow exilés, “A fool! a fool! I met a fool i’ the forest!” a link to Fool on the Hill is easy to forge.

Cloran was “intrigued and surprised” to discover the uncanny synchronicity between Shakespeare’s story arc and the song arc of the Beatles canon. “The story of young lovers falling in love (aligns with) the youthful, naive, ‘I wanna hold your hand’ of early Beatles…. And when the characters run off to the forest, the play gets a lot more philosophical and spiritual. And so does Beatles canon, in the questions the songs are asking.”

“By the end we’re singing Across The Universe and All You Need Is Love…. The story and the songwriting have grown throughout.” And along the same trajectory.

As You Like It isn’t a jukebox musical, Cloran says. “As much as I’ve thrown out half the text, it’s still very much a story, a really compelling one, about love in all its varied forms — romantic love between Rosalind and Orlando, the love between a father and daughter…. What works so well about the adaptation is that the songs continue the story. It doesn’t feel like we’re telling Shakespeare’s story and then pausing for a Beatles song, then starting up again.”

If you use Beatles songs in As You Like It, does the setting have to be ‘60s? “I asked myself that,” says Cloran. “And ‘does it have to be British?’” Since the Bard on the Beach tent is in Kitsilano, and “Kitsilano Beach in the ‘60s was the home of the counter-culture movement,” the adaptation took its cue from that. And when the characters flee the oppressive court to the Forest of Arden near the outset of As You Like It, Cloran’s adaptation has them going to the B.C. interior, where hippie sightings are not unknown. “My favourite thing is that ‘Okanagan’ scans the same as ‘Forest of Arden!” says Cloran. “I’ve got to reinvent that for Chicago….”

If As You Like It proves more musically inclined than other Shakespeares, it might be because it has more songs of its own, the most in the  canon. It has another feature that sets it strikingly apart: a wrestling scene in Act I. Young Orlando is set up by his evil brother, who orders a formidable champion wrestler to kill him during a competition he’s entered. “It turns out,” says Cloran, “that Vancouver in the ‘60s had a burgeoning professional wrestling scene,” a precursor to W.W.E.” Actually, so did Edmonton.

Cloran and the ever-inventive fight director Jonathan Hawley-Purvis have front-loaded the production with a pre-show “all-star wrestling match … a fun thing so we get the idea that it’s an enormous risk for Orlando to take on this guy, a champion who defeats wrestler after wrestler.” It’ll be in progress when you enter the theatre, so Cloran advises “be in your set by 7:15” for the 7:30 p.m. curtain.

“Yup, the set is giant wrestling ring, complete with ropes and turnbuckles. And people are jumping off the ropes, putting each other into body slams…. It’s pretty crazy!”

“It’s fun to watch the actors rise to the challenge. We ask SO much of them. They’re characters in Shakespeare, they sing all the Beatles songs, they make up the band and play all the instruments onstage. And  they play all the wrestlers as well.”

Yes, you’ll see Farren Timoteo (Made In Italy) taking on a size large wrestler in the ring. If he survives, he’ll play love-struck shepherd Silvius in Shakespeare’s As You Like It.

This entry was posted in Previews and tagged 12thnight.ca, As You Like It, Bard on the Beach, Beatles, Chicago Shakespeare Theatre, Citadel Theatre, Daryl Cloran, Edmonton theatre, Milwaukee Rep Theatre, Shakespeare. Bookmark the permalink.