If you ventured down to the river valley at Fort Edmonton this past Christmas, and caught Jocelyn Ahlf’s panto Cinderella, you’d have been tickled to see a veritable showcase of young talent at work in Kate Ryan’s cast: Bella King, Cameron Chapman, Corben Kushneryk — with Josh Travnik as one of the snarky, eminently hiss-able step-sisters, Poutine by name, always on her cell taking selfies.

In Travnik, now 24, you were watching a theatre veteran of a dozen years or more — one whose skills and aptitude for developing and supporting new work, especially musical theatre, are very Edmonton.

The best training to do a panto,” Travnik declares, is touring with Alberta Musical Theatre, which takes its clever contemporary musical versions of fairy tales on the road. “If you can play to 400 kids, with the first two rows from kindergarten, who want to climb into the trunk onstage….” The touring AMT production of Pinocchio in which he and his friend Chapman each played 14 characters did a record 312 performances on tour a season ago.

“There was as much choreography happening backstage as on,” laughs Travnik, who describes a schedule in which the cast might leave at 5:30 a.m. for a morning gig in, say, Red Deer, and drive back to town for a 1:30 p.m. matinee here. “The hardest work I’ve ever done,” he says happily.

Travnik’s Fringe premiere — or “my first big Fringe year,” as he puts it more poetically — was in a new original musical hung on an intriguing premise: (semicolon) the musical (by Daniel Belland, Calla Wright, Conar Kennedy).

“I was immediately hooked!” declares an actor who, in punctuational terms, is actually more of an exclamation mark than a semicolon. “What a great start to my Fringe performance career — with an original musical! You’ve already done the scariest thing you could possibly do!” 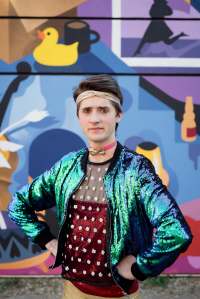 That was Travnik at 15, some nine years ago. And suddenly, there he was, in Straight Edge musicals like Ordinary Days, Bat Boy, Evil Dead The Musical. And he was in an assortment of wigs playing an assortment of characters, including raven-tressed Ronnie, in Rebecca Merkley’s River City The Musical, her clever extrapolation from the Archie comic characters.

Before and since, Travnik, who grew up in Leduc, has been adding to a resumé impressively full of musicals, both the off-centre and the brand new, often by a circle of multi-talented friends, including Daniel Belland and Calla Wright. “So creative, yes! And they’ve always had a spot for me. It’s the biggest blessing I could ever have….” says Travnik, the most supportive of ensemble players. 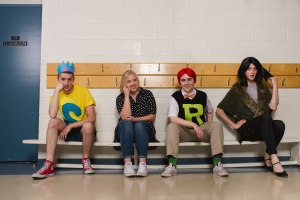 “I feel blessed to work with people who are so collaborative, excited by any offers I might make. I listen to a lot of pop music, and love singing it, and I like adding riffs here and there. The people I work with are very open to that.”

“I grew up with a lot of music in the house,” says Travnik of his childhood in Leduc. You’ve got to suspect that the staff of the Leduc library remember the kid who’d always head straight to the drawer where they kept the musicals. “All they had were compilation albums,” Travnik laughs. Les Miz, Phantom, Lloyd Webber everywhere…. So I’d request every original cast album, and they wouldn’t have it, and they’d buy it for me! I’d be very specific: the Gypsy album, but the one with Bernadette Peters.”

His first introduction to theatre “of any kind” was the Christmas plays at church, “scripts with pre-recorded backing tracks. I was just obsessed…. “ He was one of the Wise Men, a trio that included Elvis and Garth Brooks. Travnik played the latter.

But the real turning point wasn’t Oklahoma! or Annie; it was Shakespeare. The 12-year-old Travnik found himself at the Freewill Shakespeare Festival: “after that I didn’t miss a single year…. Camp Shakespeare was the highlight of my summer. We’d be learning (scenes), we’d be running around on the set. Just magic!”

“Being able to see the productions first, before having to read them, that was the best possible introduction! And such joyful productions.”

In response to this inspiration, Travnik and friends, including playwright/directors Belland and Wright, started a youth company of their own. Celsius Youth Theatre mounted full productions of Shakespeare, A Midsummer Night’s Dream and Twelfth Night among them, in community halls. “One of us would be the director; one would edit; we’d build a set and costumes.” 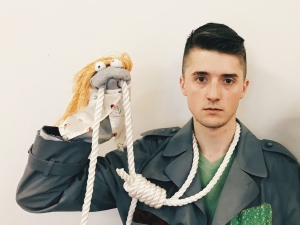 Josh Travnik as Feste in The Wind and the Rain. Photo supplied.

Two years ago, Travnik co-starred in Wright’s The Wind And The Rain, an original dark comedy-with-music that toured Fringes. Two Shakespeare fools, the Fool from King Lear and Feste from Twelfth Night are together in “the last theatre in the world, as it’s being demolished.”

Travnik arrived at MacEwan University’s musical theatre-driven theatre arts at 22, trailing a long and impressive resumé. He was part of the graduating class of 2018 that broke in the new Triffo Theatre with Sister Act (“a blast! so many nuns came to see the show, and they had a great time!”).

If the world hadn’t changed so dramatically, Travnik would be looking at a busy summer, first in Teatro La Quindicina’s revival of Everybody Goes To Mitzi’s in July. And then Merkley’s new Fringe show Scooby Don’t in August, now on hold along with the festival till the summer of 2021. Meanwhile, he and Belland are writing pop songs, and figuring out how to produce a quality single online. “We do the video on Zoom, the audio on a direct streaming service and chat on Google,” hs says. “It’s fun and exciting to be creating something outside our theatre practice; it’s keeping us sane and happy.”

“What drove me crazy the first couple of weeks (of isolation) was the feeling that everything I was doing wasn’t up to par…. It’s all about finding a way to create without the pressure to make it perfect, when you don’t have the resources….”