The Desperate Izmores: portrait of a marriage in crisis. Don’t you dare laugh. 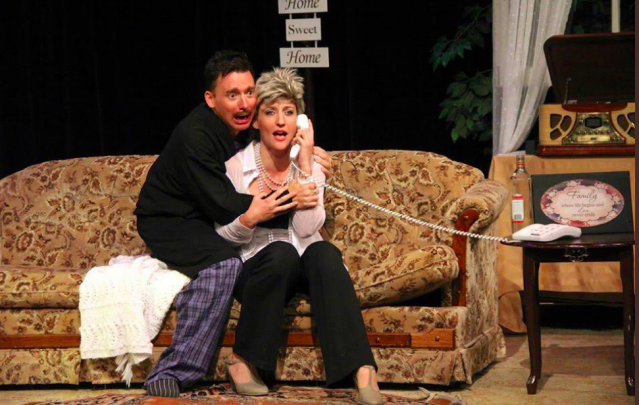 Ron Pederson and Belinda Cornish at the 2014 Soap-A-Thon. Photo supplied.

She’s bored — with a chaser of exasperation and an adenoidal voice that makes your fillings hurt. He’s a sad-sack sulker, a dimwit who’d  be a poster boy for morosity (if that ever becomes an actual word).

And yes, they are married.

Meet the Izmores, Janine and Les. Life chez Izmore is one marital cataclysm after another. Their marriage, perpetually on the point of implosion, will make you appreciate your own, even if you live in the House of Atreus. Janine and Les Izmore are the hilariously awful stars of a new YouTube comedy series created “for fun and laughs” in these socially distant times by deluxe actor/improviser/ directors Belinda Cornish and Ron Pederson — from opposite ends of the country.

Toronto-based Pederson, who regularly returns to his home town to appear in Teatro La Quindicina and Bright Young Things productions, says the Izmore characters were born at the 2014 Die-Nasty Soap-A-Thon. “Belinda and I had played a notorious husband and wife couple called the Ceiling Fans, an alcoholic pair of hallucinogenic actors who never knew where they were in 2008 and 2010,” he says.

In 2014, as the soap marathon was about to begin, he “just had pyjamas and a robe for a costume, and a painted moustache (ah, and a wig). And I was gonna play some kind of sad loser, a VCR repairman named Les Izmore….”

“Belinda came into the dressing room where I was unsure who to be, and we just shrugged and said ‘let’s be husband and wife again’.” Over the next 50 Soap-A-Thon hours the pair developed a couple who were constantly in crisis: “their marriage, their finances, their jobs, everything was always crashing around them. They were scared, and lost, and constantly freaking out.”

This turned out to be inspired. “Such a fun time that we always talked about making a play, maybe a Christmas play, for them,”  Pederson says. He credits the idea of taking the Izmores online to Cornish, who “recently had the notion these people would be funny on Zoom…. And since they were born of a soap opera, an overly dramatic series began to emerge.”

“We get together (online), and improvise and write.” The jaunty theme music (with whistling!) is courtesy of three-time Dora-winning composer Waylen Miki.

In episode 1 of The Desperate Izmores, available here, we find Les Izmore, looking particularly rumpled, living in the basement of the marital home, arguing with his fretful wife. Who is needier? Who is more aggressive? Discuss amongst yourselves afterwards. And now, there’s an episode 2. Stay tuned: a terrible marriage keeps ’em coming.