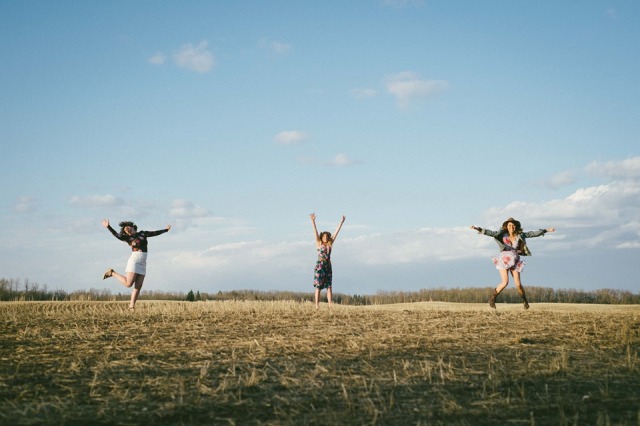 Proposition: there is a funny side to everything. If you approach from oblique angles.

While Ellie Heath was spending a month in quarantine at her mom’s place, she overheard a rambunctious maternal Zoom cocktail get-together. “Mom and her friends were all laughing, making jokes about cleaning out closets, especially the liquor cupboard, and happy hour starting early.”

A new Girl Brain sketch was born: a day-long Zoom meet-up over copious quarantinis. In this riotous first of the comedy trio’s new socially distanced series of YouTube videos (directed by Belinda Cornish) we see Heath and her Girl Brain compatriots Alyson Dicey and Caley Suliak in their separate abodes, hoisting glasses, celebrating, getting more and more corked. Which only goes to show that you’re never really alone till Bacardi leaves you in the lurch.

There are many things about the absurdities of the world and real life in these parlous times, theatre not excepted, that tickle the three clever and resourceful actor/writer, best friends who make up Girl Brain. But they admit, they were awfully old-fashioned sad when gigs in Calgary and a big two-year anniversary show at Theatre Network got cancelled, .

“This isn’t funny!” Dicey remembers lamenting to director Cornish on a Zoom call. “My whole world was ending — for a few weeks anyhow.” The lack of each other’s constant company in person was a huge blow. Says Heath “we spend so much time together, and all of sudden to not be joined at the hip was a really disorienting feeling…. We live in the same ‘hood; we’re used to seeing each other every day! And there was the uncertainty of not knowing when we can be onstage together again.”

Life for the three lobes of Girl Brain has had its own special pattern, till the current derailment: they were constantly running into each other accidentally on purpose, going for coffee, hanging out, then “the minute we walk away from each other we’re texting…. I wouldn’t call it stalking exactly, but …” laughs Suliak.

What happens to a sketch comedy-writing team when they can’t ever be in the same room together?

When Fred Kroetsch and David Cullen of Edmonton’s Catapult Pictures approached Girl Brain with “a creative proposition,” to create socially distanced sketch comedy videos in a world reconfigured by something as frightening and dark as COVID, they jumped at the chance. “O thank goodness, I get to work with my best friends again!” says Heath. Suliak says “it was a cool challenge to take something and make it funny while still being sensitive to people’s worries and real feelings.”

Brainstorming by email and Zoom took some getting used to, not least because the Girl Brain sense of humour is closely allied to physical comedy. “No body language,” sighs Dicey. “And we’re just so used to playing off each other.” Says Heath, “a lot of the humour is visual, or specific to the environment. Or based on the screen freezing, and the editing.” Says Cullen, wryly, “stage directions don’t necessarily translate to how not to break the flow of a video….”

In Cullen and Kroetsch, Girl Brain found sympathetic partners. “We’re so lucky!” says Dicey of the Catapult contribution to the new videos, shot at the requisite safe social distance. “Fred sets up our location. Then we record ourselves,” with cellphones and computers. Now would be an excellent time, they feel, for a sponsorship: listen up, Apple.

Episode 2 is a musical number. I Couldn’t Say No (not to Trudeau) is Dicey’s spirited love letter in song to her crush, inspired by the P.M.’s COVID performances. “Daily standing on your porch, you’re here for the nation/, a Canadian dude with a big daddy attitude….”

Dicey laughs. “ Every morning as Justin talks from his porch, it was an important comfort zone for me. My dad and I would watch together.” The day her father had the temerity to vacuum during the sacred broadcast, well, let’s just say he got a look that would freeze olive oil at 100 paces.

Facetime Date, episode 3, is a very funny online encounter marred by a constant stream of technical hiccups that you’ll recognize instantly from your own attempts at online socializing.

Girl Brain has always found that real-life dating is a rich vein of comic material. Have they actually tried COVID dating? Well, Heath admits to “scrolling through Bumble a bit. Then last Friday I had to get my garburator repaired. And my plumber was really attractive…. We went on a socially distant date this Monday. Yes, even in COVID love can happen. Not that it was love.”

“Sounds like a romantic comedy,” says Dicey. “Face it,” says Heath,  “we’re starved for young male content…. It’s amplified any time a beautiful young man walks by.” Suliak objects. “He doesn’t have to be beautiful. Only slightly attractive. At the park, a dude walks by, and we’re ‘wasn’t that A Man?’”

Three are up, and more episodes are ready for release on Girl Brain’s YouTube channel and their Instagram page. The the new sketches “have been through the gauntlet,” says Suliak happily. “Workshopped, paired down, tweaked. A lot of brains have worked, and tweaked — more than for our live shows. And many minds are greater than one (or three).”