‘How do I find my place in the world?’ Meet Nextfest actor/playwright Dylan Thomas-Bouchier 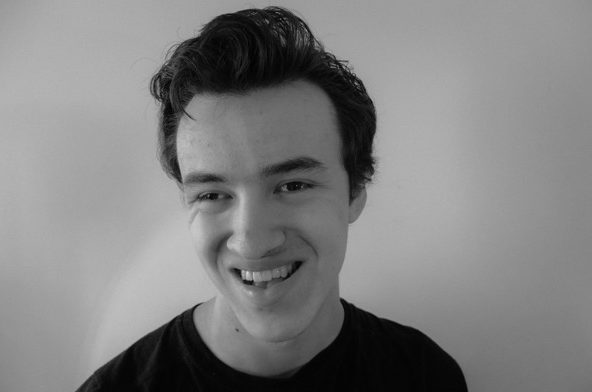 “My brain is spinning with this show,” says actor/playwright Dylan Thomas-Bouchier “It’s very much my conversation with myself.… How do I, as a new artist, find my my place in the world?”

That show is Finding Spirit — a title that in itself might be a mantra for the festival of emerging artists that launches its 25th anniversary edition online tonight. On night #2, Friday, Nextfest audiences get a peek inside the spirit of its 21-year-old creator/star. “I don’t want to be the poster child or anything,” he says. “But everyone’s voice carries a certain weight. And I want to share what I can, as an Indigenous artist…”

What we’ll see, and hear, in his Nextfest live script reading — Thomas-Bouchier calls it a “scene-sharing” — isn’t Finding Spirit in its ultimate form. For one thing, it’s “very new and still developing in my brain,” says the Fort McMurray native who’s back in the West (with his family in Okotoks to be precise) on a pandemic hiatus from Montreal and the acting program at the National Theatre School. For another, “the dream would be to take it in front of a live audience and share it that way,” he says of his multi-character solo show, coming to you Friday on video from his bedroom. “I started it with the thought of doing it in a black box … with ideas for a set and projections.”

Friday’s performance (at www.nextfest.org) is a launch, of a show and a new theatre company. Night Owl Theatre is the mutual creation of Thomas-Bouchier and fellow Indigenous actor/playwright Zach Running Coyote. “We met at NTS call-backs, we really hit it off, and knew we’d try to work together…. We have lofty goals, eventually a full season (of their original work). And a show at Nextfest is a great opportunity to get the name out there. This is the start!” muses Thomas-Bouchier, a thoughtful and intensely articulate sort.

The online 2020 incarnation of the festivities is his third Nextfest. Last year, Thomas-Bouchier was in the cast of Josh Languedoc’s Indigenous adaptation of Romeo and Juliet. His Nextfest debut, the year before that, was as a creator: Room 801. “I look back now, it’s good and I enjoyed it, but I was young” says the playwright from the vantage point of 21 remembering his 18-year-old self. “At the core I was sad. And I just wanted to write something to get feelings out.”

Room 801, says its author, “was about a man who thinks he has the perfect life; he finds a girl; they have an apartment together. And eventually his world stars to crumble.…Later  you find out he’s been in the hospital for months, in a coma, and now he’s waking up.” The play was spun from Thomas-Bouchier’s own boyhood experience “being in hospital for many months recovering from leg surgery. That was my life, being there. And it was hard…”

He says appraisingly “I don’t judge that project now…. The goal was to write about that experience, and repressed memories about my early life came up and through art became clear.”

Theatre had a big presence in his early life, growing up in Fort McMurray. He’d watched his father, who taught at Keyano College and was a veteran community theatre actor, in shows. His first participation was in a local musical, the story of  Fort McMurray, “the biggest cast ever, over 100.” But Thomas-Bouchier wasn’t one of them. “I was too scared to go out for the auditions,” he says. “And I ended up on the tech side — follow spot was my introduction to theatre! And it was a great door. I got my head set on, I could hear everything, the stage manager run the show, the crew … I could hear the machine run.”

His acting debut came a year later, in a community production of Les Miz. “From the beginning I wanted to appreciate as much as I could….”

Who are the Finding Spirit people? Thomas-Bouchier pauses to reflect. “At the core, this play is a bunch of characters who are overwhelmed right now. Each of the characters needs to find something about themselves that’s missing…. The world around them doesn’t make sense, the toxicity in modern culture.”

Among the characters we’ll meet is “a ringmaster trying to run a circus … ‘I’m the MC. And before everything went crazy and things became overwhelming you didn’t need me guiding you through the world because you’d just listen; your spirit would be with you’.”

Some characters recur, among them a young boy watching TV, with its overwhelming assault of news. “He’s the audience for me; he’s my young self,” Thomas-Bouchier says. There’s an old man too, whom the playwright conceives as a sort of town crier. When the old man insists “‘listen to me; I have the answers for you’, the young boy stops him, and questions his rhetoric.”

The fabric of the play is woven from “monologues, moments, little scenes,” says Thomas-Bouchier. “As the show develops more people are going to talk to each other.”

As it is for so many of Nextfest’s 500-plus artists, the frontiers between artistic disciplines aren’t particularly meaningful to Thomas-Bouchier. He’s been trained as an actor, yes, ready for a career in professional theatre. But “the typical ‘audition and get an agent’ grind, it’s not for me…. From the start I knew I wanted to create my own work.”

“Who knows what my journey will be? Technically I’m still in school,”  he says. “I came into theatre for people…. I need a community of people to be around, to support and be supported by.” And hey, there’s a festival for that.

Written and performed by: Dylan Thomas-Bouchier