This month you’ll get to meet and mingle with some of the country’s most exciting creators — nine Indigenous artists from Alberta, across Canada and beyond.

The Hub is an intersection of video interviews, a new one every Tuesday and Thursday. They’re all hosted by Rebecca Sadowski, a charismatic Métis artist of apparently limitless talents — as an  actor, dancer, choreographer, poet, writer, weaver … a veritable poster-person for the term “multi-disciplinary.”

Rebecca Sadowski in The Sash. Photo by Tracy Kolenchuk.

The series is brought to you by Punctuate! Theatre and the Dreamspeakers Film Festival. And as Christine Sokaymoh Frederick, executive director of the latter, explains, if the world had been a different sort of place in 2020, you’d be experiencing The Hub live — in the lobby of the Citadel’s Rice Theatre, after every performance of After The Fire.

Set in the immediate aftermath of the terrible Fort McMurray fire, Matthew MacKenzie’s play, co-produced by Punctuate! and Dreamspeakers, was to have run in April-May as part of the Citadel’s Highwire Performance Series. And, as Frederick describes it, The Hub, “a plethora of offerings from Indigenous artists” in a cabaret setting, was designed “to maximize that experience.”

When Highwire, along with Dreamspeakers and Alberta Aboriginal Arts’ Rubaboo Festival, was cancelled, the Hub team set about refurbishing the series for a journey online. Says Frederick, “we were bolstered by the encouragement of the Edmonton Arts Council,” which readily agreed to repurpose their grant. “We wanted to get some money into artists’ hands as soon as possible to buoy them a bit through this crisis.”

The virtual version of The Hub, curated by Frederick and MacKenzie, introduces us to an impressive array of creators, and them to a broader audience. “Music, theatre, visual arts, film, improv, dance … they’ll challenge, burst through, people’s cultural expectations,” says Frederick, herself an actor/playwright.

The series deliberately embraces both emerging and established artists. “We wanted a mix of art forms, and artists at different points in the trajectory of their careers.” And there’s a kind of mentorship momentum to the gathering: “what would excite them and propel them forward?”

The Virtual Indigenous Artist Hub launched earlier this week with Smoky Lake-based visual artist/writer/community activist Dawn Marie Marchand, whose bold and colourful work you’ll see as a backdrop on the Hub website. And it continues July 2 with Edmonton playwright and storyteller Josh Languedoc, whose solo show Rocko and Nakota: Tales From The Land has toured the country. 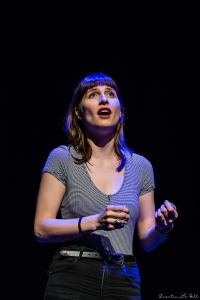 Check out the schedule and find out more about each artist at Punctuate! Theatre.