Hungry for theatre? Lodestar Theatre delivers … to your own back yard 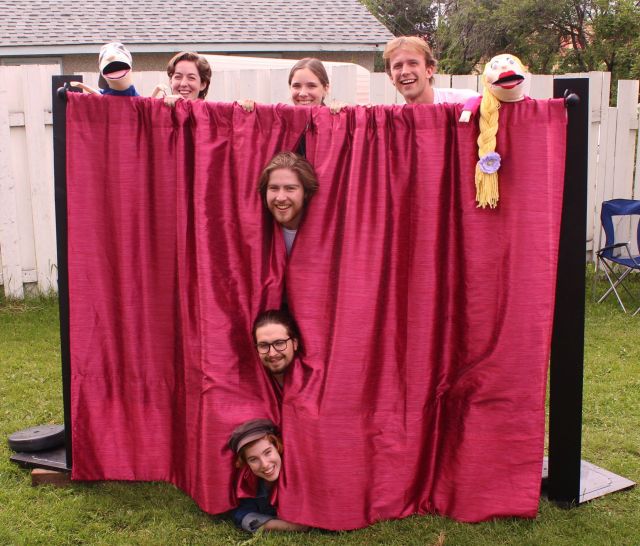 Extraordinary times call for extraordinary measures. In this unpredictable and isolating moment, which has sent live theatre into lockdown exile on screens, Lodestar Theatre is its own creative resistance movement.

The rep company, originally from Liverpool in the U.K. and relocated here since 2017, will deliver live theatre safely to you — on your doorstep, right in your front or back yard.

You choose the production from Lodestar’s ever-expanding “garden theatre” menu. On seven days notice you can choose the date, and a curtain time between 10 a.m. and 10 p.m. (midnight shows by special arrangement) to suit. You choose the location. And you assemble the guest list (according to current safety rules governing gatherings): a gaggle of theatre-hungry pals perhaps, a block-party assortment of neighbours, or a princely private performance for one. The Lodestar price, ranging from $250 to $450, depends on the size of the cast.

First up is a six-actor 75-minute version of Shakespeare’s great al fresco romantic comedy A Midsummer Night’s Dream which takes its characters, fairy and human, on a wild cavort beyond the court and through the woods, with magical interventions. As Lodestar director Max Rubin says of this debut offering, opening in his own front garden garden Friday, the play “doesn’t just work beautifully, but could almost have been written” for garden theatre.

“The online stuff is wonderful,” he says of the ingenuity with which live theatre here and everywhere has adjusted to online technology.  “But it just reminds me how much I miss the liveness and communion of theatre….” He thinks that  “when we come back we will come back with a roar. People will remember how important theatre is in our lives.”

In the meantime Lodestar does deliveries — of live adaptations of the classics, or offerings from the more modern repertoire, comedies or dramas, with thoughts of including new Canadian plays in future. After Dream, the next addition to the menu, available from next week, is a double-bill of 19th century comedies, Chekhov’s sparkler The Proposal and Shaw’s How He Lied To Her Husband. Then Lodestar adds another double-bill by July 25, a pairing of Chekhov’s The Bear and a 1912 suffragette comedy, Evelyn Glover’s Miss Appleyard’s Awakening. “By the end of the month we’ll have four or five shows,” says Rubin. “The idea is to provide a range.”

Range was built into Lodestar’s identity from birth, in 2006 in Liverpool. That’s where Rubin met his actor-wife Ruth Alexander, Londoners both, doing a show at the Liverpool Everyman in 1999. “We fell in love with (that city) and with each other … and stayed for 20 years,” says Rubin. “Brexit told us we had to leave…. It was our view of Canada that brought us here; we thought it was somewhere that would suit us.”

When the Tories got in, in Britain in 2010, “it became evident to us that we could carry on with our company, but we’d be spending 11 and a half months a year raising money…. It seemed, to us anyhow, that Canada was a more optimistic place, with far more generous and sensible arts policies than back home. Easier there to make things happen.” They sought out Edmonton so Rubin, “a director with an eye on teaching,” could do an MFA in directing at the U of A, a degree he required in order to teach at Canadian theatre schools. He graduated last year with a modernist production, by all reports gripping, of Shakespeare’s Richard III. 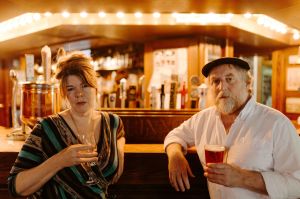 Edmonton audiences have seen Alexander, a principal on the TV series Coronation Street, onstage in such Lodestar shows as Two (at last summer’s Fringe) and Pinter’s The Birthday Party (in 2019), and in Wild Side Productions’ The Children just before the pandemic lockdown in March. For the current venture she’s in charge of musical arrangements and prop-building.

“I desperately wanted to start a company here, to re-establish Lodestar in a new way for Edmonton,” says Rubin. “I know it’s an extraordinary time and hard to plan anything. But I do hope we can continue to grow it, perhaps using this new model of working…. Come the end of September perhaps we may be able to do things inside, if it’s safe.”

“Ideally, we’d have half a dozen plays on the go…. Maybe if we could find other local companies with shows ready to go, we could ‘host’ their productions….” 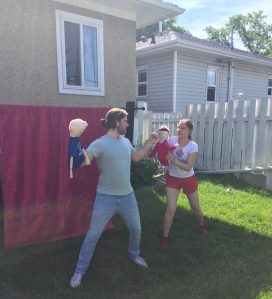 His Midsummer Night’s Dream cast of six consists of recent BFA acting grads from the U of A. Of that ensemble, three will be in each of the double-bills that follow. Rubin is happy they’re undertaking theatre work. “I found it particularly heartbreaking for these kids to come out into the world and for this to be their first year…. How miserable for them.” Needless to say, they’re eager: “they’re so passionate about working; they’re ‘give me more plays and I’ll learn them’. Wonderful,” says Rubin.

They rehearse, several plays at once, in his back garden. “When it rains we go into my garage, which I’ve emptied out. It’s not glamorous!”

“We do the loud bits at half-voice. And our neighbours have been very understanding,” although (as he reports, laughing), the moment when Bottom the weaver, transformed into an ass, re-appears to his shrieking thespian buddies,  “they figured we were being attacked. We had to reassure them.” 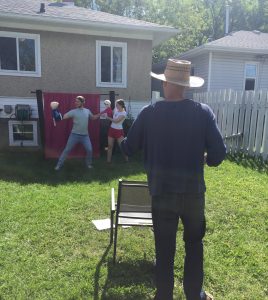 The actors rehearse in masks, mainly, but will perform without them. “We decided at the beginning as a company to form a (COVID) bubble,” says Rubin. “We’ve had to down tools once when one of our actors came in indirect contact with someone with COVID, and we waited for the all-clear…. We’re doing all we can to be as careful as we can.” Distancing is a great challenge in rehearsals, of course. “There are bits where we just can’t avoid proximity.”

The size of the audience (masks not mandatory but recommended) is up to the customer, regulated by COVID guidelines and the size of the yard. “When we started, the maximum for an outdoor gathering was 15. Now things have loosened up a bit; 100 people can gather so long as distance is observed. We’d be equally happy doing the show for an audience of one…. Most of the people who’ve booked are expecting 20 or 30 people, so I imagine that’ll be the norm.”

Bookings have been coming in already. “I’m delighted to say that so far the idea seems to have gone down well!” says Rubin. “And we’ve done no marketing to speak of, except word-of-mouth.”

The cast size of six puts A Midsummer Night’s Dream in Lodestar’s top-price top-ingenuity category (with correspondingly smaller prices for two- and three-hander plays). The $450 Dream tab, divvied up, means about 50 bucks apiece for cast and crew, “with a bit left over for gas.”

It’s a busy show for the actors. The only one who doesn’t have several roles is Sheldon Stockdale as Puck, the fairy king’s valet. The quartet of young lovers, played by two actors, is assisted by puppets for the big fight scene in Act III. “What started out as necessity has become one of our favourite parts of the show,” says Rubin.

Where: your front or back yard

Further information on the Lodestar lineup, and to book a performance: lodestartheatre.org