Playing With Fire: the Mayfield straps on the blades, live, with the Theo Fleury story 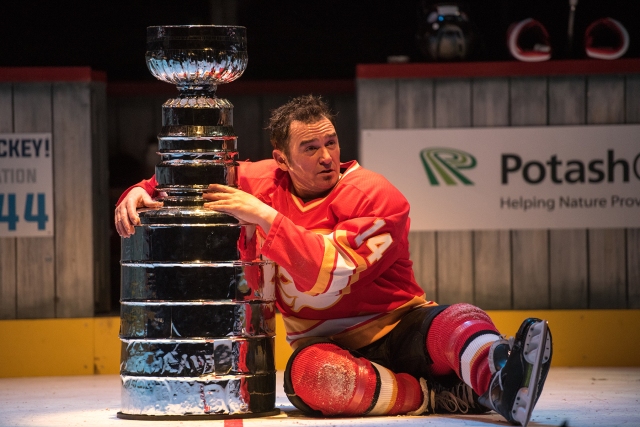 The show that skates (really!) onto the Mayfield Dinner Theatre stage next week — live — is the story of a small-town prairie boy from a neglectful and chaotic family, who makes a big life-changing discovery.

It’s quintessentially Canadian: when six-year-old Theo Fleury, from Russell, Man., puts on blades and ventures onto ice, he finds what  he’s been missing. Joy.

As Playing With Fire: The Theo Fleury Story reveals, that first fateful discovery is followed by others. The big talent and big dreams that took that kid to improbable NHL stardom were sabotaged by the fallout from the horrific boyhood abuse that landed Western Hockey League coach Graham James in jail. The way a fierce and funny hockey star, haunted by his past, blew up $50 million and (very nearly) a career in spectacular fashion, and how he regained his life and himself … they’re part of the story too.

The hit production fashioned by the award-winning director Ron Jenkins from Kirstie McLellan Day’s solo play (based on Fleury’s candid 2009 autobiography) stars the charismatic actor Shaun Smyth, a U of A theatre grad who left the West Coast three years ago for a Hamilton home base. He’s put on his skates, left one first, exactly as the small and feisty ex-Calgary Flames forward did — and slammed into the boards across the country, ever since the show premiered at Calgary’s ATP in 2012.

On the phone from his home town of Sydney in Cape Breton (where he returned from Alberta in 2017), Jenkins is conjuring the night Fleury himself came to see the show at the Citadel in 2015. Lights up, standing ovation, someone spots the hockey great and yells “We love you Theo!” All hell breaks loose. Suddenly everyone is cheering and crying.

Smyth’s wife Jennie (actor/writer/director Jennie Esdale) and I were bawling our heads off. So was (Citadel production manager) Cheryl Hoover, the whole crew, everyone….”

In Montreal, at the Centaur Theatre, Canadiens players and Dick Irvin, “the voice of the Habs,” came to see the show. In Calgary, at ATP where Playing With Fire premiered, the Calgary Flames came, and brought their families. Audiences showed up in their Flames jerseys. “The theatre was a sea of red,” says Jenkins. The show broke ATP’s beer sales records. Whenever Shaun left the “stage,” the usher standing by would high-five him. “So moving.” Jenkins chokes up a bit remembering.

The production, which has been at many of the country’s regional theatres (and was slated for a Blyth Festival run this summer until the shutdown), takes place entirely on “ice,” with Smyth on real skates. The Mayfield season-opener marks the return to town of an actor who went to theatre school here, and a director/writer whose resumé includes 10 Sterling Awards and a stint as Workshop West artistic director.

For these pandemical times, the 450-seat Mayfield has been dramatically reduced for 150 patrons, reconfigured with plexiglass between socially distanced tables and booths. Masks are de rigueur to enter or move. The signature buffet has been replaced by table service. The show has been tightened to an intermission-less 90 minutes. 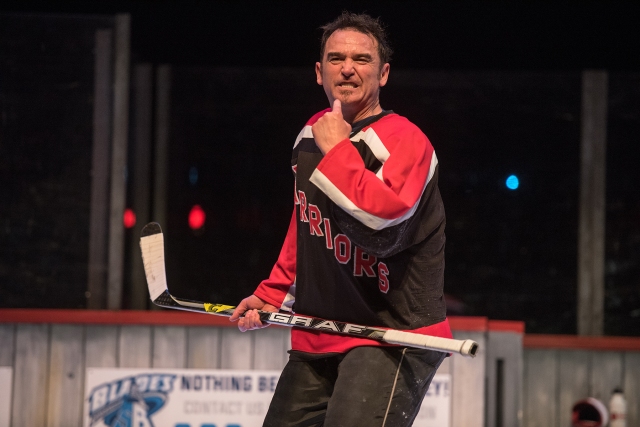 And as for the stage, it’s sprayed with a synthetic ice called EZGlide before every performance. As Jenkins laughs, Playing With Fire is the only show this year where  plexiglass between the stage and the audience actually makes narrative sense. Since we’re at the rink, puck after puck cracks against it; the sound is pure hockey.

Jenkins, a hockey fan who played pick-up games with other theatre guys during his time in Edmonton, remembers getting invited by McLellan Day’s agent to read the memoir he’d been hoping to get for Christmas. “I barrelled through it,” he says. “It’s a great book! There was so much I didn’t know. So revealing and so brutally honest about everything and everyone. Mostly himself.”

At the time, the script was set in a hotel room. “The story points were all there. But it had to happen on an actual rink! Look, this is a completely compelling story!” Rollerblades, the usual solution for other hockey plays like Life After Hockey, Kenneth Brown’s love letter to pickup backyard hockey, were out, Jenkins thought. Too theatrical for Fleury’s story. “It’s the NHL; it has to be on hockey skates!” Luckily, EZGlide, that magic elixir, had been invented by then.

Smyth, says Jenkins, was the obvious choice of star. “He’s a great actor; he looks like Theo. Same height, same weight.” Only one question remained for Smyth. “Have you played hockey?”

Well, yes. I remember the engaging Smyth telling me that, yes, he could skate, and he could even skate backward. But as for playing an NHL hockey great? That kind of authenticity in every cross-over took a huge commitment in sweat equity. Smyth commandeered a patch of asphalt in the only playground on Bowen Island, then rented the indoor rink at the end of his street in Vancouver. Hour after hour day after day he roller-skated.

Smyth’s in-laws were, as Jenkins puts it, “steeped in hockey. Jennie’s father was a coach of the Golden Bears; her brother was a pro player. And they helped him train.”

Fleury’s story has a power that’s hard to shake. Jenkins muses on its appeal. “Canada is hockey. Hockey is Canada…. There’s an innocence about a boy with a dream. And someone comes into his life who turns a dream into a nightmare.”

“He was 15 years old. And people were talking about him. Hey, there’s this kid from Russell, Manitoba. And he’s incredible!… Graham James held that dream over his head, in a way. Even when the shit hit the fan (as Sheldon Kennedy came forward to identify himself as a victim of the junior hockey coach), Theo kept (the secret) and kept it and kept it. How do you go through $50 million? He was blowing up his life. And nobody really knew why.”

It’s profoundly poignant, Jenkins finds, that “at the end of his career when he quit, Fleury didn’t call anyone. He just disappeared…. All he needed to do was make one phone call, say ‘I think I’m going to retire’ and he’d have had $4 million from the Montreal Canadiens.”

“The way he gains some power, and his life, back makes people feel like cheering,” Jenkins says of Playing With Fire. Now there’s a sound in short supply these days.