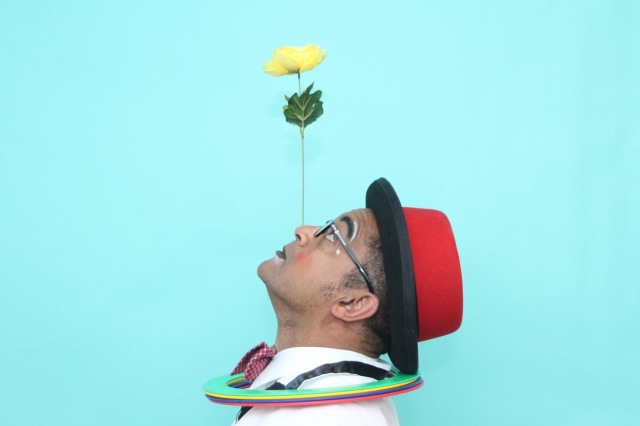 “Clowns work as well as aspirin, but twice as fast.” –Groucho Marx

And for the major migraine that is COVID, it’s high time we had some. Clowns, that is.

The only thing is, clowns thrive on real live close-up encounters with real live people, responding to their vibe — and their laughter. The fourth wall, barricading the theatrical illusion, means absolutely sweet tweet to a clown. “So it’s a tricky pivot,” says Christine Lesiak of re-tooling the fifth annual Play The Fool Festival for the digital (and socially distanced) world. “The live interactive element, the ‘what’s going to happen next?’,” as she puts it, make a festival devoted to the celebration of clown and physical theatre for adult audiences an oddball fit in the new onscreen pandemical world order.

But, as she says, “clowns make do.” And screen clowning isn’t an outlandish prospect. After all, Lesiak she points out, “there’s a rich history of film clowns” — from Chaplin and Laurel and Hardy to media stars like Stephen Colbert, or the clown characters of Jim Carrey and Melissa McPherson. Lesiak, the creator and star of the widely travelled Fringe hit For Science!, has curated a digital Play The Fool lineup that includes film and video component, live streamed delights, a live act (for socially distanced gatherings), and a panel discussion.

In fact, there’s a first-ever Play The Fool two-minute film competition, especially tailored for fierce concentrators and/or short attention spans. You’re never going to say ‘so cut to the chase already’ at a 120-second film festival. “There is no fat in a two-minute film,” Lesiak laughs.

In August the festival invited clown and physical comedy-themed submissions, the only stipulation. And much to Lesiak’s delight — and surprise, since “making things for the screen is hard, and incredibly time-consuming” — she got 40. There’s a startling variety, and they’re from everywhere: an international array of “little gems,” of which 20 or so, selected by a jury of film-makers, will be up on playthefool.ca for screening starting Thursday.

Candace Berlinguette at Play The Fool. Photo by John Marian.

There are those who will doggedly argue that the red nose is the only true clown ID.  Lesiak disagrees: “One of our missions is to challenge the parameters of clowning!” she says of Play The Fool programming. From the start it has regularly expanded that horizon with clowns of every shape, style, aesthetic, and personality from the wide-eyed innocent to the macabre Euro-existentialist, bouffon to burlesque, blabber-mouth to mime to drag artist. Lesiak’s own gallery of clown alter-egos is a hint — among them red-nosed Sheshells, the worldly lifestyle advice guru Aggie (Ask Aggie), the white-coated Professor with the brisk beaming good cheer in For Science!.

A highlight of this year’s Play The Fool is the Saturday 3 p.m. screening of The Wise Fool, Geraldine Carr’s documentary honouring the life and career of the legendary clown (and clown guru, mentor, coach, philosopher, writer, director) Jan Henderson. If you haven’t already, you’ll meet Henderson’s charming clown Fender. And you may well be inspired by this engaging artist to unleash your own inner clown.

Signal Boost is Lesiak’s curated online assortment of high-contrast clown film and video offerings, from Edmonton, across Canada, and beyond. It’s a lineup of recommendations that reflects an elastic view of clown identity. Guys in Disguise’s audio-play revival of Dragula is one. Todd Houseman and Ben Gorodetsky’s Folk Lordz, which mines and cross-hatches the former’s Cree and the latter’s Russian Jewish heritage, is another. In this incarnation it’s a selection of two-to-four-minute sketches, “very funny, very political,” as Lesiak says.”Beautifully written, great production values, so well-crafted. This is very smart comedy.”

Toronto-based clown duo Morro and Jasp and Vancouver’s New(to)Town Collective are in the line-up, along with the film ABC (Anything But COVID) by Ugly Bucket Theatre from the U.K., who have, says Lesiak, a distinctively contemporary theatre/clown sensibility. She describes The Uncle Junior Project as “a community-driven online exhibit that celebrates the history of black circuses in the U.S…. Eye-opening, especially in Canada.”

COVID has shut down live performance, and cruelly. But to look on the bright side (which clowns are apt to do) “we can reach a global audience,” says Lesiak. “It’s exciting. And even after, we’ll keep an online presence I think…. The biggest challenge is time zones.”

And live, did someone say LIVE? Via Play The Fool The Great Balanzo (Aytan Ross) and his Circus To Go can be booked to come to you, “like a pizza,”  in your own backyard.

Produced by: Hit The Jive Productions

Tickets: most programming is free (donations gratefully accepted), with some Signal Boost acts requiring payment directly to the artists.