Through the window and out in the world: some thoughts on Plain Jane’s Scenes From The Sidewalk 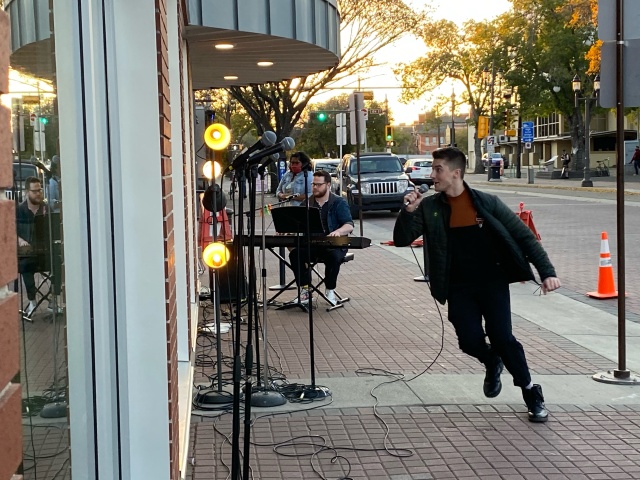 The Varscona Theatre opened its door this past weekend for the first time since March.

The door to the lobby, that is. Which is where 20 of us sat (distanced and masked) on Sunday at 5:30, looking out the big street-side windows at the world beyond — and at a sextet of young theatre artists out on the sidewalk. Theatre often talks the talk about being of the world, in the world, a reflection of the world, a live capture. With their ingenious new cabaret Scenes From The Sidewalk: An Inside Out Cabaret, which played three performances on the weekend, the Plain Janes have figured out how to walk the walk (or dance the dance) in a clever new way.

The unexpected configuration — turning theatre inside out, with the actors outside, performing against the backdrop of the real live city, and the audience tucked inside looking out — is a bright idea. It’s one of those multi-faceted metaphors with a pulse and resonance beyond these strange COVID-ian times. And these times being what they are (i.e. full of screens), there’s something pretty thrilling and extra-dimensional about entering a real theatre — even if there’s a little ripple of un-reality about having your temperature, instead of your ticket, taken at the door.

In the benign golden light of late afternoon Sunday, urban life was going on. It was the set, and the cast of extras, for a cabaret. Intrigued passengers stuck their heads out windows of passing cars on 83rd Ave. Curious cyclists and E-scooter-ists slowed down; ditto, joggers and strollers who did double-takes and stopped. A family across the street did a photo shoot of themselves in various permutations against Walterdale Theatre’s big red garage doors. A couple of cops arrived at the Gazebo Park, where a camp for the homeless was happening, a moment of potential drama that would have felt very different, I suspect, at evening performances.

In fact, the lighting of the night-time shows, and the sense of street life, would have changed the magic (I’m imagining the “extras” fading into shadows). 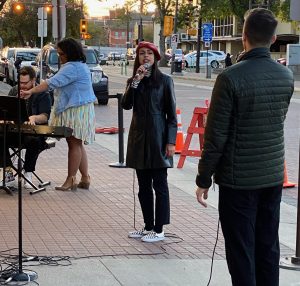 We could hear the cast (Janes artistic director Kate Ryan was inside with us, at the sound board). They couldn’t hear us, so we were encouraged to display our reactions physically. Apparently the cast chose (and/or created) songs — and in the case of Althea Cunningham poems — to reveal something of their personal perspective on a year in which the meaning of togetherness, solitude, and home have changed so radically, and theatre careers have lurched to a complete stop.

The comical Josh Travnik tucked into the opening number, One By One By One from Adam Gwon’s Ordinary Days, as a luckless “ambassador” for a visual artist trying in vain to hand out flyers to the passing citizenry who are oblivious, or worse. His cast-mates were supplemented by the odd anonymous extra. “The city tends to make me feel invisible,” he sang. “It makes me wanna scream/ Or write a manifesto/ That declares the city void of any soul.” 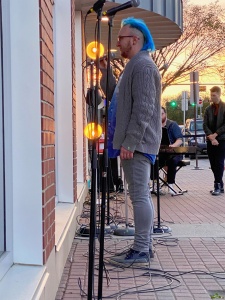 There’s a lively and enlivening variety of takes: the pandemic as imprisonment, or even liberation from the usual. The Janes know their musicals, and they easily cross into pop.  Jason Hardwick’s lovely account of Sailing, a dreamy desire for escape to sweet idylls gone by, from the off-centre William Finn musical A New Brain, will strike a chord.

Nice, from Lucky Stiff, a duet for a fracturing couple who think they’re sick of each other — “now I have no one to ruin my day” — might well have been written with enforced quarantine partnerships in mind. It’s performed in sprightly fashion by Travnik and Daniela Fernandez. Another take on the lurking transformation of closeness is Monster (Sue Goberdhan and Matt Graham) by Dodie, an English singer-songwriter I didn’t know anything about. “Well, this ends bad then, we knew it would/ So we won’t eat our words, ‘cause they don’t taste good….” 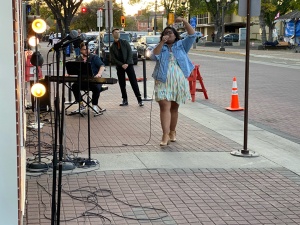 Funny how songs take on new and unexpected colours under our peculiar circumstances. Goberdhan, a thoroughly engaging performer (and the new co-artistic producer of Azimuth Theatre), picked Sammy Rae’s Whatever We Feel to find an up side to the pandemic: a new freedom to do whatever you want whenever you want, for no particular reason except whim.

Adele’s Hometown Glory (Fernandez) has a different feel at the moment, too: “the people I’ve met/ Are the wonders of my world….” So does When Everything Falls Apart from Frozen (Hardwick). Althea Cunningham brings us her reflections on the black experience — in her powerful account of the Tracy Chapman song Behind The Wall (“the police always come late/ if they come at all”), and in her own fierce and moving poetry. 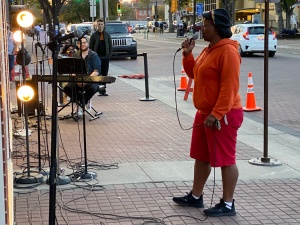 I was very taken with Matt Graham’s original song In 50 Years, with its jazzy intro and smart, thoughtful reflections on the maybe’s built into an uncertain future. And Travnik revealed an unstoppably catchy original dance party tune Taste (co-written with Homofonik queer pop duo partner Daniel Belland): “I don’t want you forever/ just one little taste.”

The finale, The Tuba Song, from a pop musical adaptation of Shakespeare’s rarely performed Love’s Labour’s Lost, turns out to be a jaunty anthem to exploring the uncertain future through fresh eyes. “I need the rush of possibility/ The unprepared reply….”

They hit home. Words to live by.