A Brimful of Asha: a son, a mother, and a culture gap onstage at the Citadel. Meet co-creator and Canadian theatre star Ravi Jain.

It is a truth universally acknowledged that a single man in possession of an emerging theatre career must be in want of a wife. (A wife arranged by his mother).

We now take you back a decade or so, to the life and burgeoning fortunes of the then-27-year-old Ravi Jain, a rising star in Canadian theatre — and single.

We caught up with the actor, director, theatre maker, artistic director of Toronto’s evocatively named Why Not Theatre to ask him about the company, and the hit play opening tonight on the Citadel’s 680-seat Shoctor stage (to an audience of 100 as part of Horizon Series LIVE).  A Brimful of Asha, his joint creation with his mother Asha, was inspired by the business, so problematic for his immigrant India-born parents and not for him, of his lingering singleness (at 27!) and their acrobatic attempts to arrange a marriage for him in the traditional way.

Born and raised in Toronto, Jain left after high school to study theatre abroad, in an assortment of the world’s theatre capitals, London first, then New York, Washington, Paris. “I didn’t grow up much on Canadian theatre,” he says of his younger self. “I was inspired more by physical theatre, multi-lingual, multi-cultural, a collision of cultures. For me it was always international….”

“When I came back to Toronto I didn’t really see that happening anywhere,” says Jain, who’s lively, smart, and accessible in conversation. “And I wanted to find a way to make it happen, that vision, that conversation … to change the model of what a theatre company can be.”

The result, in 2007, was Why Not, a company of the experimental, innovative, risk-taker stripe that has acquired a creative team of 10 over the last dozen years, as well as an international profile for new work, and original takes on classics (witness an acclaimed production of Prince Hamlet, gender-bending and in an expressive melange of English and ASL).

Nimet Sanji in A Brimful of Asha, Citadel Theatre. Photo by Janice Saxon.

In short, Jain was a happening up-and-coming Canadian theatre creator, and happy to wait for marriage until he had time and focus to, you know, meet the right woman and fall in love. Why not? Arranged marriages don’t get a lot of positive vibes from the contemporary western culture, right?.

Enter Asha. A Brimful of Asha, he says, was inspired by “a true story; it really happened.” And “it was important to have my mom’s perspective…. She said ‘if the audience heard my side of the story they’d agree with me!’”

So mother and son wrote the play together, with its amusing and provocative counterpoint of perspectives, in a wild narrative that involves mom and dad following Ravi on a theatre work trip to India and plotting to set up meetings with a series of eligible bridal prospects. And Asha “agreed to appear on the stage as herself.” Which has got to count as a remarkably brave venture by a non-actor who wasn’t exactly thrilled, to understate the case, by the career her son had chosen.

The premiere run at Toronto’s Tarragon Theatre in 2012 sold out completely, as did a second run there. “People loved it. And the response has been the same as we toured it all over the world,” says Jain. As reports from everywhere confirm, “people come away feeling like our relationship is at the centre of the story. And we have a good one. People recognize their own mom in mine, and they’re really taken by the story…. Older people often say ‘when I was young I agreed with you; now I’m older I grew with your mom’.”

Ravi laughs. “It’s the same everywhere.” Besides, he says simply, “she’s great. And charming.” Mieko Ouchi’s Citadel production, starring Nimet Kanji and Adolyn H. Dar, is only the second ever with actors other than the Jains.

In the end, did four years of touring the world changed his mom’s mind about the desirability, or lack thereof, of a career in theatre. “I wouldn’t say that!” says Jain. “She appreciates it more…. She has more appreciation for the people, and the hard work that goes into it. She loves the interaction with an audience. But is it her dream job for her kid? Well, no.”

And come to that, it’s a moment of great uncertainty in the world of theatre. Jain, who’s not into Zoom versions of theatre for Why Not, thinks “The big change isn’t whether (live theatre) will be back, it will … but the process of how we go about making it, making space for different people, different voices…. This gives us time to think about the inequities.” 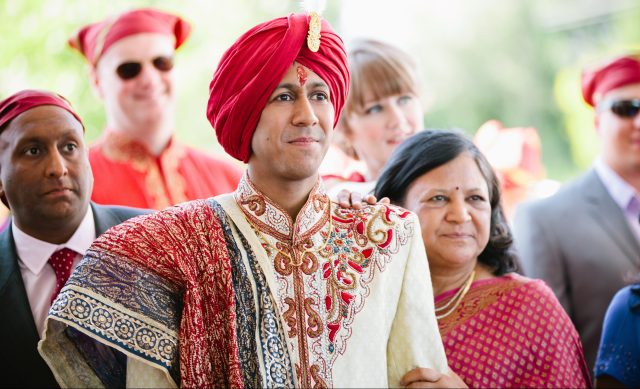 Ravi Jain and his mother Asha Jain at his wedding. Photo supplied.

I know what you’re wondering, of course. Did Jain manage to get wed, in the end, to someone he’d chosen for himself? See above. “I’ve been married for eight years,” he laughs. “I was engaged when we first opened the show.”

Check out 12thnight’s conversation HERE with director Mieko Ouchi about the “heartwarming realness” of A Brimful of Asha.

A Brimful of Asha

Written by: Asha and Ravi Jain