Curio Shoppe is home care, Catch The Keys style. Give yourself a fright. 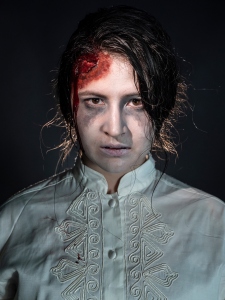 Home care (Catch The Keys-style). “It’s time to haunt your own house,” says a silky voice, coming at us in the dark from the internet ether.

As its name suggests, Curio Shoppe, the ingenious joint creation of the Catch the Keys sister duo Megan and Beth Dart, spins its nightmare story from a selection of dusty, vintage objects. “The odd and unwanted, bits and bobs,” as the shoppe owner slyly describes a selection of objets that unlock a grisly narrative from Edmonton’s history. As we know from the company’s annual excursions into the past with Dead Centre of Town, we may be steeped in urban banality, but we’re the largely unknowing possessors of a surprisingly lurid, violent, bizarre history.

This time the location is your place, with the lights out, which is a trickier proposition. You’ll hear no more about the story from me; this is an experience that reveals itself in your online choices (designed by the ever-creative systems analyst Bradley King), and layers of projections and video and strange sounds and voices, and … oh my gawd, why is my cellphone ringing?

I’m just reporting back from last night to say that Curio Shoppe is an artful, immersive piece of theatre, designed especially for a time in our collective history when we’re jammed between so-called reality, the online world, and, er, other worlds from the past and beyond the grave. Isn’t Google a sort of medium after all? How often do dead people text you?

Give yourself a fright.

Curio Shoppe includes Colin Matty, Morgan Yamada, Jake Tkaczyk, Christine Lesiak, and other cameos. And it’s the work of an entire team of audio, video, lighting, internet and theatrical designers and other experts who have lavished love on it.  And also ghoulish gore. I’m pretty sure it’s not fake. Is it?

It runs through Oct. 31. And tickets (one per household) are available at catchthekeys.ca. The only requirement is a reliable internet connection and a cellphone that’s on.