Doing musical theatre in 2020? It’s an intricate challenge: the making of Keep Calm and Rock On at the Mayfield

You’ve got to be ingenious to make live theatre. And no one (sane) ever said it was slam-dunk easy money.

But bringing a musical live to the theatre stage in late 2020 in the middle of a pandemic? It’s just about the most nerve-wracking thing you could possibly do. Just ask Van Wilmott, who’s opening one this week at the Mayfield Dinner Theatre.

The Mayfield artistic director was on the phone last weekend to shed light on the multiple creative complications that went into Keep Calm and Rock On — and the maze of ever-changing safety rules and work-arounds that have gone into rehearsing it. “Zoom and plexiglass,” sighs Wilmott. “If only we’d known … we’d all be rich.”

Off the top, of course, there’s this to work around: in musical theatre people sing. And although singing, regarded all summer as the riskiest of COVID-spreaders, was downgraded to join loud talking on that risk list, “there’s still no singing in Alberta without a giant asterisk,” as Wilmott puts it. Masks or barriers of some kind are de rigueur. “And we will not lip-synch here under any circumstances.”

It’s a principal reason (along with budget) that the intended lineup, dotted with big-cast big-budget jukebox musicals — like Rock of Ages last spring and Mamma Mia! slated for the spring of 2021— were scrapped, for later. Instead the Mayfield season opened in September with a one-man play, Playing With Fire: the Theo Fleury Story, for a distanced audience, 35 per cent reduced (less than 110 in a 450-seat house). The plexiglass barricade between the stage and the audience, and the barriers between tiers of the house, made theatrical sense in a hockey play that happens on a rink.

In any case Wilmott had long wanted to bring in the hit Ron Jenkins production, starring the compelling Shaun Smyth (on real skates) as the troubled hockey star who “had a shit-storm dealt to him, and he overcame his demons and came out on top!”

“We’ve never had a show with 455 F-bombs in it,” says Wilmott, a wry and candid sort in conversation. “But they were so tied to the character that 98 per cent of the audience was just fine with it.” And Wilmott thinks the play’s “direct address, a guy talking right to you,” was ideal for engaging the audience, especially since Smyth’s performance was so visceral and captivating.

A solo play, with dark currents, was an unconventional Mayfield choice. But it counts as a success at an unusually adventurous dinner theatre. “We did the (box office) numbers we could,” Wilmott says of filling the reduced house capacity. And in a commercial house, “the best case is a break-even…. It was a way for us to put our toe in.” 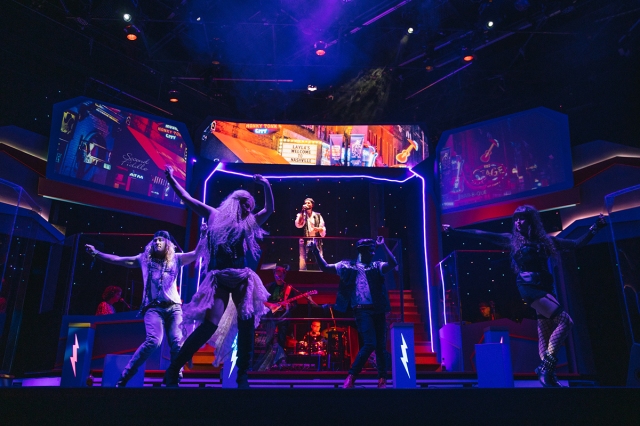 Stay Calm and Rock On, the original jukebox musical that opens this week and runs for 11 weeks over the seasonal holidays, goes beyond a toe dip. It comes closer to a full-bodied immersion experience — with elaborate COVID-ian logistical adjustments in size, budget, stagecraft, and rehearsals. “The clear expectation of the Mayfield Christmas musical (traditionally the theatre’s biggest money-maker and a magnet for office parties) is that it needs to be rock, and it needs to be silly and shticky,” says Wilmott.

“The budget has been streamlined, for 35 per cent occupancy,” says Wilmott. The production staged by Kate Ryan has a cast of five, instead of the usual nine or 10, along with a five-member onstage band. And “the cast is living in as close a bubble as we can make it,” Wilmott says.

Bubbles are easier to maintain with out-of-town performers whose domestic lives are elsewhere. Of the five actor/singers, four (ensconced at the Mayfield Inn & Suites, home of the theatre) come from away, and two (Pamela Gordon and Brad Wiebe) are a couple. The fifth, Edmonton’s Kieran Martin Murphy, has “taken one for the team,” by actually leaving home and moving into the hotel for three months be inside the cast bubble.

The original idea was “a contemporary Vegas show,” says Wilmott. “It got pulled by budget, so we reinvented.” Instead this latest from the prolific Mayfield collaborator Will Marks is a deep dive into the archive of ‘70s hits. And the premise, as Wilmott describes, works assiduously around COVID safety protocols (and got OK’ed by the government). It starts with this, tailored expressly for the times: “when you’re singing you’ve got to be in a box.”

The concept is “a band who haven’t been onstage together in years — because they absolutely hate each other. If you took Spinal Tap, and mixed it with Fleetwood Mac and the Mamas and Papas, and A Minute To Win It….”

Now “stuck with each other,” they’ve landed in a sort of escape room/ game show situation. And their way out is via a variety of musical challenges. “They’re re-living their hits, and they have to score points to get out….”

“When a song kicks in, the singer has to be in a (plexiglass) box, kinda like an isolation booth in a recording studio.” The live band, laughs Wilmott, the musical director, “is encased in Plexiglass. Like Madame Tussaud’s.… We keep the actors away from the musicians. Which is never a bad idea.”

It was, he sighs, “an interesting show to stage.” And it came with “the weirdest rehearsal period ever,” says Wilmott. “Everyone has to stay healthy, come hell or high water.” Everyone wore a mask or shield. “We kicked people out of the rehearsal room every 30 minutes so fresh air could circulate.” At 9 every night when rehearsals ended, “the ghost-buster people came with big spray guys to disinfect the room for (the requisite) 12 hours before the next day’s rehearsal.

Stage director Ryan, who directed a Zoom production of Sondheim’s Assassins with the Citadel Theatre Young Company this past summer, says the learning in musical theatre continues:  “More breaks, less people in the room, spacial relationships are everything, and technology is our new friend.”

“Not exactly what you’d call efficient,” Wilmott sighs. “A challenge for sure. But it’s a new world. And there’s no choice. If you’re going to DO this, this is how it has to be,. It’s the only safe way….”

Keep Calm And Rock On