“Terror and festering dread,” and a mystery narrator to unknot: We Had A Girl Before You at Northern Light. A review.

Kristin Johnston in We Had A Girl Before You. Photo by Ian Jackson, Epic Photography

We’re isolated from each other, alone in the dark. Haunting wind and sea sounds surround us, threaded with wisps of melody and … are those human cries? (composer/ sound designer Dave Clarke).

When we enter the theatre a shadowy figure in funereal black is already there, on an outsized wrought-iron chair between banks of flickering candles. There’s an open volume on her lap.

What happens in Trevor Schmidt’s new solo Gothic thriller We Had A Girl Before You, is the opening of that volume and the recounting of a ghostly tale of “fear and wonder … terror and festering dread,” a cocktail for our own uneasy time. Is it a true memory? A dream? A feverish fantasy of an unhinged Victorian mind? Has the loveless Miss Edwina Trout (“Weenie” to her friends, if she had any) cast herself as the heroine in a first-person Gothic romance novella of her own device?

She is not entirely sure, as she turns the pages of her diary conjuring people and encounters for us. And neither are we. Which is the seductive fun of Northern Light’s atmospheric season-opener, re-crafted by playwright/ director/ designer Schmidt from its original purpose as a two-night fund-raiser. In the 300-seat Westbury Theatre it’s a model of safe social-distancing for a masked audience of less than two dozen.

The uncertainties attached to the narrative are skillfully gathered. What IS sure is Schmidt’s deft and stylish homage to the elite perpetrators of the Gothic romance — the heaving bosoms of its aspirational orphaned governesses longing for love, its alluring but elusive mystery men, its crumbling manor houses teetering atop its remote cliff-top settings, its ghostly trail of unexplained deaths, its terrible weather.

We Had A Girl Before You, Northern Light Theatre. Photo by Ian Jackson, Epic Photography.

There are sly hints of Rebecca and The Turn of the Screw. There are clever echoes of the motifs (brother and sister, mysterious illness, encroaching madness) and the great opening gambit of Poe’s The Fall of the House of Usher. The reverb here is unmistakeable: “The house loomed above me, towering over the cliff, leaning as thought it meant to hurl itself to the crashing sea below.” And if the Brontes are your jam (I confess!), you’ll strike gold here. Whiffs of Jane Eyre and Wuthering Heights drift by in the mist: fire in the charred north wing, a toxic water-filled dungeon, a locked room with a mystery inhabitant…. In Miss Edwina Trout, there’s a wink at the novella-addled heroine of Jane Austen’s gothic romance satire Northanger Abbey.

“I was drawn to the to the unknown … I was ready for an adventure,” says Miss Trout of the employment opportunity as a “lady’s companion” — in a manor house called Desolation atop a cliff on a remote island — that will rescue her from her dreary life at the Wexlington-Sheffield Home for Foundlings, Orphans and Unfortunate Unwanted Children. 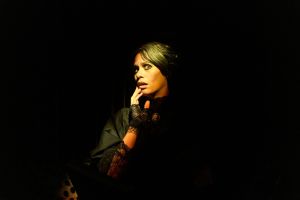 Kristin Johnston in We Had A Girl Before You, Northern Light Theatre. Photo by Ian Jackson, Epic Photography.

“Weenie,” the only character we meet in person in this full-bodied Gothic romance, single-handedly populates it, blowsy barmaids, taciturn coach drivers, vicious orphanage matrons, boatsmen with one cloudy eye. The list is impressive. Playwright Schmidt clearly relishes the heaping-on of similes and circumlocutions, a great zest for words, built into the genre. And the striking Kristin Johnston, who tread so fearlessly in Northern Light’s Origin of the Species and Baroness Bianka’s Bloodsongs, is remarkably skillful at identifying a whole cast of colourful characters by voice, verbal inflection, accent, facial expression, as well as recording for us Weenie’s declension into terror and possibly beyond. She is a commanding presence.

In this Johnston is materially assisted by the narrative contributions of Roy Jackson’s virtuoso lighting design: this is a production where theatrical lighting can change time and place, not to mention atmosphere, in a blink.

The tale is gift-wrapped in a deluxe way. It’s for us to unwrap it, and instead wrap our minds around the possible status of the character who sits before us, telling us a “true story.” Intriguing, playful, and fun. Who doesn’t need that now?

We Had A Girl Before You