You’ve heard of Elf on the Shelf, now get ready for … Edmonton’s Meme Queens 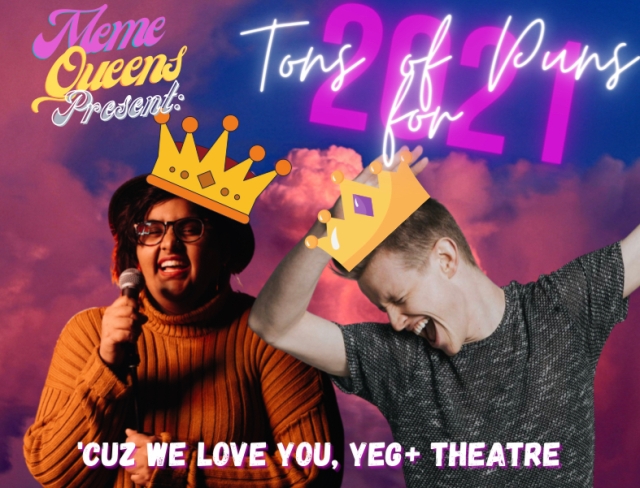 You’ve heard of Elf on the Shelf, now get ready for this….

Face it, 2020, a dumpster fire of a year, hasn’t given theatre people a lot to get happy about, creative though they are. But there’s just no telling what the kooky side effects might be when they have to stay home, up late with time on their hands (and even when they don’t), making their own fun.

Theatre artists Luc Tellier and Sue Goberdhan know all about that. On a whim, for sheer amusement value, they’ve been custom-making punned, rhymed, personalized Elf on the Shelf memes for members of the E-town theatre community — and posting them on Facebook walls. And the theatre community is tickled.

“I was worried we were just being annoying,” laughs Goberdhan, the new co-artistic director (with Morgan Yamada) of Azimuth Theatre. Au contraire, “what we kept hearing (via a stream of texts and emails and calls) was ‘You’re saving 2020! We will get Christmas after all!’”

“We were overwhelmed by the response!” says actor/ director/ coach/ teacher Tellier, equally amazed and delighted by the escalating buzz. “People kept asking ‘where can we see all of them?” Which is why, by popular request , after 200 (and counting) of their funny, individualized memes, the pair are creating a compilation, in the form of a calendar, The Meme Queens Present: Tons of Puns for 2021. The graphic design by Goberdhan includes 130 or more of them.

And if you’re a theatre artist (or know one), or a theatre go-er or wannabe, or, hell, just an all-round playful Edmonton fan, you’re just going to have to buy one (30 bucks up front, pick-up in January).  Tellier calls it “a love letter to Edmonton theatre.”

“The stars aligned perfectly!” declares Goberdhan. So did the collective sense of humour. The original inspiration was the Instagram celeb trend spun from a 2005 Christmas kids’ book about a surveillance elf sent from North Pole to scout out the naughty or nice kids. It went viral. Movie star Reese Witherspoon, for example, posted a picture of herself with an image of Olivia Newton-John and John Travolta dancing on her shoulder: “Grease on Reese.” It got a zillion hits. 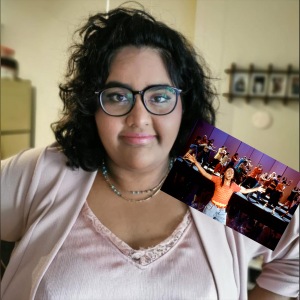 Goberdhan, an actor/ administrator/ activist with considerable indie theatre cred, spotted a photo of herself on Twitter, with an image of her smiling self with her all-time favourite movie Sister Act II (“the best movie ever made,” she insists) sitting on her shoulder. It takes some figuring out, but showbiz people are up for it. “Sister Act II on a girl named Sue,” of course. “It was the most joy I’ve felt the entire pandemic!” Goberdhan declares.

Some require insider knowledge of pronunciation, part of the fun. Take, for example, an image of actor/ playwright/ sketch comic Elena Belyea of Tiny Bear Jaws sitting on Tellier’s shoulder: “Belyea on a Tellier.”

And so it came to pass the Goberdhan and Tellier egged each other on. And “people loved it.” The first Elf on a Shelf Tellier posted on Facebook was “Tina on a Gina,” to wit Tina Turner on the shoulder of arts administrator/ stage manager Gina Puntil. “Alanis on a Janis”? Alanis Morisette on the NDP’s intrepid Janis Irwin. “It got thousands of Likes on Facebook,” says Tellier. One giddy thing led to another, more and more, the punnier the better, a veritable online carnival of free-associative wackiness.

Luc Tellier. Juke on a Luc.

“One of my favourite parts,” says Tellier, “is that neither of us ever made a decision to have a ‘project’….  It wasn’t till we were eyeballs deep into it, and people started reach out to us with suggestions” that the pair even realized they had one going. And it was a bona fide Edmonton theatre craze, a kind of group hug in a hug-less time.

“Suddenly I realized that with all the memes he’d made, no one had  made one of Luc,” says Goberdhan. Hence, a beaming image of him, a jukebox on his shoulder: “juke on a Luc.”

They’re both musical theatre triple-threats; they write and act; they’re instigators and activists. But somehow Tellier and Goberdhan didn’t meet doing a show. That story is pretty oddball, too. They were both pretending to be clients of up-and-coming lawyers.

And it’s not like they aren’t busy. Tellier is doing queer dramaturgy for MacEwan University’s upcoming (online) production of the big Sondheim musical your, now in rehearsal. He’s an arts educator at Jube School. Goberdhan is planning out her new Azimuth directorship. “I had COVID at one point,” she says. “And I still have residual effects, like brain fog…. Reading grant applications has been hard. But I can do this,” she says of theatre memes. It’s visual!”

“At the beginning it was really easy. Gecko on a Mieko,” says Tellier of their Mieko Ouchi meme. Another early fave is “Maquette on a Paquette,” with its set mock-up on the shoulder of director/stage manager Wayne Paquette, of Blarney Productions. And who will not smile to see “Clooney on a Mooney,” a meme shoulder tribute to Edmonton theatre legend Margaret Mooney?

Now the guessing game is getting trickier, sometimes more abstract, sometimes more specific. If you’re a Facebook friend of hers, check out actor/director Emma Houghton, with a tiny bear on her shoulder saying ‘I don’t know’.” It’s “Doubtin’ on a Houghton.” Sometimes the guesses are better than the original, says Goberdhan, of  “Dilemma on an Emma.” I’ll leave you to think about “Carousin’ on a Brausen.” (There’s a yours truly  meme too, and it’s a hoot).

“We’re approaching brain saturation,” Tellier laughs. “If this is what we can come up with by accident, imagine what we could do…” he trails off.  “We’ve stumbled on something that brings us together.”

And a time that’s been cruelly isolating for the Edmonton theatre community and artists who are, by profession and temperament, collaborators, has gotten warmer. “I miss everyone so much right now,” says Goberdhan.