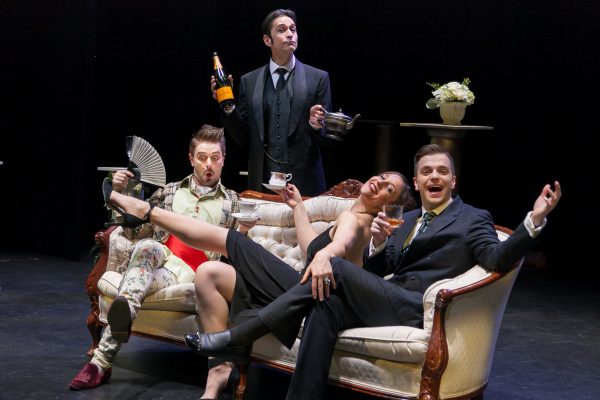 It’s entirely possible no one will see your party shoes. But if there was ever a New Year’s Eve to hoist a glass of bubbly and cheer loudly, it’s got to be this one. And it comes not a moment too soon: goodbye and good riddance to 2020.

Here are a couple of thoughts for a festive theatre boost on The Eve, as you give 2020 the boot and toast a better year to come.

Live theatre is shuttered into mid-January, and we can’t wait for its return. But the spirit of revelry lives on Teatro La Quindicina, a company with a 15-year tradition of living it up from the Varscona stage (and backstage too) on New Year’s Eve.

The centrepiece of the festivities for the last decade, at the top of Act II, is always a brand new original playlet of a half-hour duration or so, by Teatro resident playwright Stewart Lemoine. The cast, of anywhere from a dozen to two, eat real food and drink colourful cocktails onstage. And (gasp!) they’re apt to sing. Lemoine calls all of the above “the very pinnacle of pre-COVIDian decadence.”

Speed is of the essence in this Teatro new-year new-play tradition. The play is always written by Lemoine on Dec. 27 and 28. Rehearsals invariably commence at 11 a.m. on the 29th and continue up till the half-hour call on the 31st.

2020 hasn’t been kind to any of the above, needless to say. Teatro cancelled its entire 2020 summer season, and re-booked everything to 2021. But in honour of a defining tradition, the theatre will be posting three favourite scripts from New Year’s Eves past to its website (teatroq.com)  Dec. 31 — along with annotations by the playwright, cast memories, photos and even some rare video footage.

The trio of the chosen all, incidentally, have Edmonton settings. You’ll get to read The Ball of Ideas (2012) involves an impromptu wedding at a Hilton Garden Inn. An Invitation And A Map (2015) is set at a New Year’s Eve Party in Picture Butte, with an invasion by unexpected guests. A Louis of a Party (2017) is a celebratory New Year’s Eve divorce party for perfect strangers at the Chateau Louis. The scripts are available, free, through the first week in January. Donations, though, are welcomed in celebratory fashion.

Filming A Christmas Carol at the Citadel Theatre. Photo by Raoul Bhatt.

•The Citadel has two productions for streaming on New Year’s Eve. Dec. 31 is your last chance to catch the Citadel’s digital edition of its lavish light-filled production of A Christmas Carol, starring the great Ted Dykstra as the stone-hearted Mr. Scrooge. This year’s production — the second season of a new adaptation by David van Belle, set in the post-war world of 1949 — was filmed so Edmonton wouldn’t be Carol-less on this of all years, not after two decades. Streaming passes are at citadeltheatre.com. Check out the 12thnight review here.

•The Varscona Theatre‘s first-ever Virtual Holiday Gala, a fun and festive affair (I know, I hoisted a glass at home, watching), continues online. You can have fun watching; I know I did. Belinda Cornish and Mark Meer host. Cocktails-for-one lesson provided. A variety of offerings from Varscona’s bright assortment of triple-threat artists. The commercials (including one for EPCOR, purveyor of the invaluable Heart + Soul Fun) are a hoot. Bonus: you get to hear Andrea House sing, outside with a remarkably attractive view of the Edmonton river valley behind her. Streaming is free (varsconatheatre.com); donations will be applauded loudly. Read about it here. 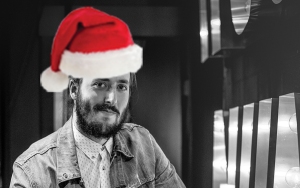 •The Grindstone Comedy Theatre is holding over, for streaming, its Comedy Christmas Special till Dec. 31. Livestreamed on Christmas Day, the big-cast multi-disciplinary extravaganza (made possible by EPCOR’s Heart and Soul Fund) is hosted by comedian Kathleen McGee, with musical guests Aladean Kheroufi and the Royal Foundry. And know this. No expense has been spared: you’ll be seeing an outstanding Deena Hinshaw wig.

And this may ring your 2020 New Year’s Eve chimes: it comes with a “strong language, violence, and sexual themes” warning.

•Go shopping for a 2021 calendar, and make yourself smile and feel part of something: . YEG theatre’s “meme queens” — Sue Goberdhan and Luc Tellier — have been amusing themselves along with the rest of us, by creating personalized rhyming and punning Elf On The Shelf memes for Edmonton’s theatre people, posted on FB walls. Now there’s a compilation, in the form of a meme-crammed calendar.

Check it out here, and order one at paypal.me/memequeensyeg.

•Hip to the needs of “the new world order,” The Queen of Rationalization (Heather D. Swain aka Dr. Auntie Dote) is available for online consultation on New Year’s Eve. The Queen undertakes to rationalize all your dubious choices and bad behaviour of the year. Book a 15-minute reprieve from yourself : 780-222-2005.