The Look, from Northern Light: “for the many women you are.” A review 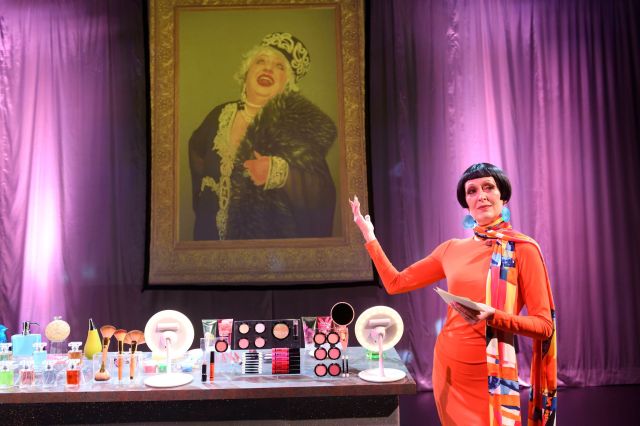 It’s not enough to have the look, the former face of Estelle Cosmetics tells her audience of trainees, emphatically, near the outset of The Look. “You have to live the look.”

Which is exactly what Marilyn Miles (Linda Grass) has spent her career in the bezillion-dollar beauty biz doing. And which, in the waning days of her run at the top, is the crux of Marilyn’s current existential crisis, as revealed in this darkly comic little exfoliation by Australian screenwriter/editor Alexa Wyatt.

What can Marilyn, age 50 or 60, do with a belief system built, explicitly, on capturing eternal youth — and the convenient corporate conviction, as a supplement, that the perfect, un-wrinkled youthful feminine facade is actually more than skin deep?

Concealer and the ever-more-liberal application of highlights, even the expensive Estelle kind, will only take you so far on the enforced march of time. For one thing chasing youth is just not a race you can win, even if you, like our Estelle representative, believe that all women should enter it. And hey, for another, it makes you wonder why there’s a race at all, since it leaves so much of humanity stranded and unvalued, on the shoals of chronology. But we’ll get back to Marilyn momentarily.

The Look, which dates from 1992, gets its North American premiere in a vividly theatrical digital treatment from Northern Light Theatre directed by Trevor Schmidt (available for streaming till the end of the month). The set-up of the play is perfectly suited for a film counterpoint of pore-ready close-ups and interwoven long-shots, with stage lighting that’s make-up lights writ large, and audience murmurs (cinematographer Ian Jackson).

It’s Day 1 of training week at Estelle Cosmetics. We’re at a lecture-demo/ performance a la TED by the company’s original super-model, now relegated by age to the indignity of training her own replacements, the girls — and you get to use that word —  who will work the Estelle cosmetic counters.

Linda Grass presides, in fine, alert comic form as the beauty who rocketed from “ordinary schoolgirl to famous model — just like that!” as she says brightly, as a long manicured fingernail flies off. Ah yes, there will be more layering on and flinging off, a kind of emotional wax and peel, in the course of the play. And in her performance Grass is fearless about the playing on the frontier between glamourpuss and clown, the gorgeous and the grotesque, the comic and the tragic.

We follow her, perfectly groomed, wearing a shiny black helmet of hair and high-style pumps, up the stairs and onto the Estelle stage. She takes off one face covering, her gruesomely smiling COVID mask, to reveal another, grimly unsmiling — and then pastes on the automatic antidote “Estelle smile.”

The look of The Look is, to say the least, striking (set and costumes by Schmidt; wonderfully garish lighting by Rae Dunn McCallum). So … big colours, bold strokes, grand poses, heightened come-hither or go-hence expressions from Grass as Marilyn. Her head seems to swivel for second thoughts and double takes, on a pivot owned and operated by her own massive fringe of false eyelashes. 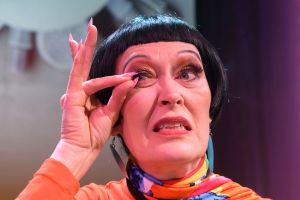 With its array of magic bottles and powders and sprays, the make-up counter is Marilyn’s altar, as high priestess. And the mirror has a magnetic effect on her whole body; she orbits around it and gravitates towards it; the willowy Grass, a skilful physical comedian, bends over backwards, literally, to find herself in it. If that mirror is Marilyn’s sun, the god in her galaxy is an aging cosmetic magnate (men can age, no problem). And in the course of her lecture, Marilyn will read between her own lines, and come to realize something crucial about her orbit.

The play itself seems a bit crude in its arc — like putting on mascara before the eyeliner — but Schmidt’s production is expert concealer. And in this delicate assignment, Grass smartly charts a physical course for the emotional crescendo of distraction that escalates awkwardness into full-scale desperation, and strips off one mask for another, and another. There’s a veritable river of mascara in this show.

We’re bombarded by a series of highly entertaining poster shots (projection designer Ian Jackson) from Estelle campaigns in which the youthful Marilyn, reinvented each time for the male and corporate gaze (with witty Darrin Hagen sound to match), has starred. Grass is stunningly transformable.

“Picadilly Circus,” a story for spring with a Twiggy-type blonde pixie smiling slyly out at us, is a seminal early example:“Brixton black” eyeliner, “London lashes,” “shy hint of blush” (the transforming makeup is by Kendra Humphrey). It introduced the ground-breaking landmark lipstick colour Eros Fantasy Pink, “pink down to its birthday suit,” as Marilyn annotates. The script has fun with beauty industry lingo. The most disturbing is “Sweet Dreams,” a long-lashed child fantasy, complete with hair bow and teddy bear. Marilyn has memories to match.

In the noble pursuit of beauty in an ugly world, full of bad things like, you know, war and famine, Estelle Cosmetics is relentless: beauty as something to be “created,” “enhanced,” “rejoiced in” — an art form, albeit a transient one, as Marilyn repeats. Estelle talks a good game. But there are telling hints that the fantasy manifesto, at least as waterproof as Estelle mascara, has begun to leak at the seams.

Marilyn can’t quite seem to remember which of her names is her “real” name. She isn’t confident she has the attention of the crowd; is her mic working? She has no lashes of her own; the “chronic sustained use of mascara” has seen to that. The silky sexy Estelle voice gives way to a real woman’s voice, blithe girlish laughter turns brittle. Marilyn has, she reveals, looked into her magic mirror, and seen … no one.

It’s the ultimate nightmare identity crisis, the vanishing of a self that has existed to be looked at. And there’s a universal horror story in that. Make-up, Marilyn has told us, is at the very heart of a woman’s perception of herself. Without it, and the gaze that attends it, Marilyn has become invisible.

Beautifully acted and filmed in this Northern Light production, this play about playing isn’t evasive, oblique, or even subtle. The Look is a little morality tale (an hour or so), “a tale as old as time” to quote from a Disney fairy tale about beauty, about existing in the world by play-acting a part on demand. It “puts you on a pedestal, to look up your skirt,” says Marilyn of the world, aiming for vivacity and landing on despair.

Estelle Cosmetics may be, as billed, “for the many women you are….”  Every woman, that is, except the real one.