They’re young, bright, and unstoppably creative. And, pandemic be damned, their adaptable, flexible talents are already lighting up the Edmonton theatre scene. In this 12thnight series you’ll meet some of E-town’s sought-after up-and-comers, artists whose work, on- and backstage, is already having an impact in this challenging age — and will have more when the theatre doors are open again. 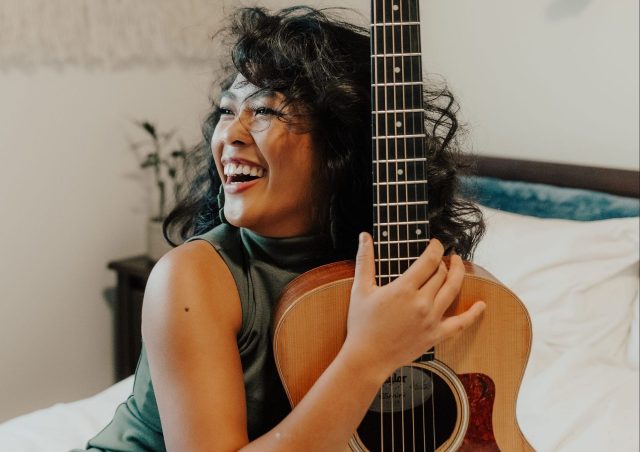 “I went with the flow, and I never wanted to resist it,” says the exuberant, laughing voice on the phone. As if that accounted for the entrance of a stellar new triple-threat onto the scene any more than matches account for fireworks.

If you saw one of the guests knock it out of the park at the Fezziwigs’ annual holiday bash, in the Citadel’s ‘40s account of A Christmas Carol, you’ve already know something about the high-impact voice and sparkle of Chariz Faulmino.

Even before she burst out of MacEwan U in 2018 with a theatre arts degree — and a knock-out star performance in Sister Act on her resumé — Faulmino had been catching the eye of producers and directors across town. And she’s been on stages of every size and description ever since — even a farm on one memorable afternoon as part of the Citadel’s summer roadshow initiative of intimate backyard concerts on location (“people sang along, and the horses did neigh at some points, or was that yay?”).

It’s a list that includes outdoor troubadour gigs of songs and scenes in parks for the Free Willies (the Freewill Shakespeare Festival). A radio play (Dammitammy Productions’ They Wanted To Do Chekhov). An interactive online mystery (S.I.S.T.E.R. by the Fox Den Collective). A cabaret (Kate Ryan’s Cafe Wanderlust). A variety show (Teatro La Quindicina’s Welcome Home). A new musical (The Killing Jar, for Scona Alumni Theatre).

With the Citadel’s A Christmas Carol, “I met people I’ve seen onstage before; I got to work with them and be friends with them!” says Faulmino, who retains notes of awe-struck in her voice. “You meet your heroes, stars, and they’re all normal people and they’re awesome!” 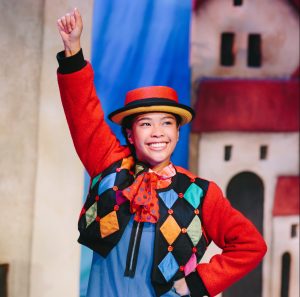 And on a tour, more than 350 performances long, of Alberta Musical Theatre’s charmer of an original musical Pinocchio, she played the title character who emerges, in sprightly fashion, from a trunk, and immediately starts singing and dancing like a seasoned trouper.

Faulmino, who arrived age nine in Sherwood Park with her family from the Philippines, grew up speaking Tagalog, but singing in English “a regular thing for us there; we love our karaoke!” Her models came from the international world of pop music: “Whitney Huston (especially Whitney Huston), Celine Dion, Mariah Carey…. ”

So … Canada. Of her immigrant experience, Faulmino says “my English wasn’t very good. I didn’t fit in right away, and I didn’t have any friends…. I really tried to make friends, to become a people person!”, a self-appointed task that comes with rave reviews in the theatre community. Music, not theatre, was her jam at first. “I was a pop music kind of person…. I didn’t even know who Sondheim was till I was in post-secondary,” she says. “And did I miss out!” 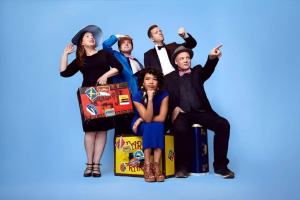 “Music was always in our family remember singing forever. My grandfather always sang to us, and so did my dad….. The only theatre person I knew was Lea Salonga; I love Lea Salonga!,” a fellow Filipina who’d catapulted to Broadway stardom in Miss Saigon and become the first Asian woman to win a Tony. “I didn’t know theatre till I was in junior high, and was forced to audition for Aladdin.” Faulmino laughs. She “went with the flow” as she puts it cheerfully  — and landed the leading role of Princess Jasmine.

Musical theatre took hold. “I found a lot of heart in it; I think that’s what drew me to it,” says Faulmino, who’s in her early ‘20s.  “The songs are sung by characters, by people, by a person who’s walked a certain life.”

The Faulmino family was musical, true. But a musical theatre career?  “It was an odd route to take,” she says, a smile in her voice. “My dad was an engineer; my grandfather was an engineer…. But (the family) was always very supportive. When they see me perform, they know my heart is there….”

It’s been a tough year for that heart, a year of “huge life-changing events.” At about performance 270 when the long Pinocchio tour was in the Rockies, Faulmino had news that her father had suddenly passed away. Alberta Musical Theatre artistic director Farren Timoteo stepped into her role; so did musical director Mackenzie Reurink. “And the cast fully supported me through the terrible time…. I couldn’t have asked for better people.”

Later that year, on an Alberta Workers’ Health Centre tour, Faulmino learned that her grandmother, who speaks no English, was in hospital. Faulmino spent a month at her side daily, translating and assisting. Actor Michelle Diaz stepped up. And Faulmino is grateful.

If there’s a positive to come out of the pandemic isolation, it’s been “time to absorb everything, to be with my family,” she says. “A huge blessing to have this break in the world, and step back.” 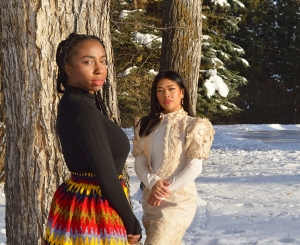 In the lockdown hiatus she and (fellow Free Willie) Jameela McNeil have formed a duo. And they’re currently Zoom rehearsing a play list  of “songs about love — with a partner, with yourself, with the world … R&B songs, songs that have influenced us, mostly made by people of colour, artists we’ve looked up to…. Lea Salonga is one!” CJ will make its debut at the SkirtsAfire Festival in March, with any luck live and if not online.

Faulmino is part of Dammitammy’s upcoming radio play Letters to No One (letters written but never sent); she even wrote one of the monologues. And when the delayed revival of Teatro’s musical Everybody Goes To Mitzi’s happens, we’ll see Faulmino in it.

Will she stay in Edmonton? “It’s a question I also ask myself,” Faulmino says. “But I’ve found something here that’s on the cusp of getting built, a great community that’s only growing.”