Unwrapping an adventure: La Boîte Sensorielle delivers a box to your place Life can be full of surprises. You, my friend, are going to get a mysterious package delivered to your door.

It’s wrapped; it has your name on it. But you mustn’t open it until  showtime a few days later. And you’ll be blindfolded as you explore the contents, guided by the performer’s  voice in your ear.

La Boîte Sensorielle/ SensoryBox is a live/digital theatre hybrid that brings this adventure by Calgary’s zestfully experimental Ghost River Theatre to you on location at your place. Its entire premiere run last fall sold out in Calgary. Now, as presented by L’UniThéâtre, Edmonton’s francophone theatre, it’s happening for the first time in French. (Side note: you have to admit SensoryBox sounds more lyrical en français: La Boîte Sensorielle).

“Who doesn’t like getting stuff in the mail?” laughs Eric Rose, co-playwright/ director and Ghost River’s artistic director. “It’s kind of old-school that way….” And it’s designed to re-create for our repetitive, isolating, screen-dominated time, the specialness and sense of anticipation that attach themselves naturally to going to the live theatre in person. After all, the routine fallback of couch and Netflix of an evening doesn’t require much active participation except being more or less conscious.

Unboxing a mystery has a whiff of Christmas about it: you have to wait to be surprised. It’s ‘don’t unwrap till Dec. 25’ for this pandemic moment. And in the case of The SensoryBox, “there is no show without you!” as Rose declares.

In the last decade the Ghost River innovators have explored “sensory experiences,” touch, smell, intuition among them, in an award-winning, immersive Sixth Sense series.  SensoryBox, the latest, was inspired, says Rose, by reflections that whirl around the question — crucial to the performing arts and its audiences in this challenging Zoom-laden moment in history — of “liveness.”

“What defines a live experience?”

At a moment when theatre artists are summoning their wits to engage an audience across the flat screen (and audiences are wondering the same thing), there’s a certain creative vigour and optimism about Rose, an award-winning theatre-maker with a philosophical streak. “I think in some ways the disruption will (make) the life-affirming arts take a massive leap forward — in what we think about, how we consider liveness. It’s an opportunity to think about how the content we create is disseminated, what we’ve counted on, what we’ve assumed about our audiences and how they engage with it.”

For actors, as he points out sympathetically, there’s a different relationship with this since the work has just gone…. For me, it’s not just to make art, but also to employ.” In the end, “what kind of care do we need in order to call ourselves a community?”

“What I’ve realized,” says Rose, “ is that liveness is very much based on perception.” After all, as he points out, theatre is based on our collective agreement to be deceived, “to imagine, to suspend disbelief in order to immerse ourselves in a world….”

And part of liveness, he thinks, is “presence… What allows people to be present in a story? In this new online environment, the screen feels flat, and we don’t feel necessary as an audience; we’re passive. Is there anything we require (of the audience) beyond putting in a code?” He laughs. “These are very big challenges…. How do we take the things we love about the (live) experience and translate them into this new reality?” 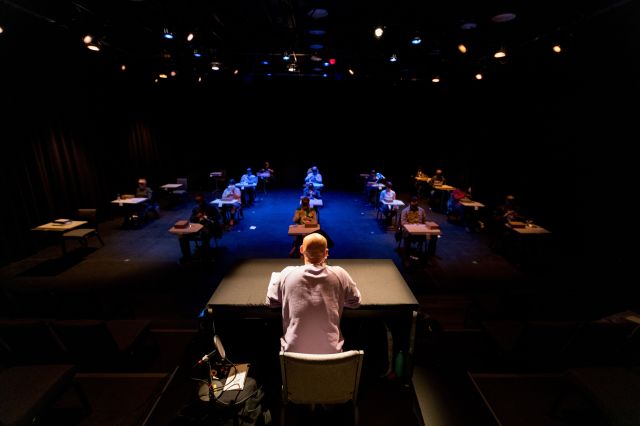 What he and his SensoryBox co-playwright Christopher Duthie (who performs in the French version) were after, says Rose, is creating a theatrical experience where “the content is generated by both parties, the performer and the audience.” And The SensoryBox is neither flat nor 2-D; it’s tactile.

“There’s no show without you!” he says cheerfully. “It can’t happen. We set up cues to stimulate your imagination. But without you engaging in it, half the show would be missing.”

Unlike everything about the future and its escalating uncertainties, it’s an adventure with no anxiety or pre-planning required. “We’re just asking you to be present. Just listen to the voice, follow the instructions in a thoughtful way, and interact with the objects. One of the goals is to allow adults feel like kids again. Another is to help people to process this very weird COVID time we’ve all had to embrace….”

“What’s beautiful about it, the moment you put on a blindfold you really could be anywhere,” says Rose. The Calgary run in September had an audience that was partly online and partly, 20 at a time, live at cabaret tables in a theatre. “You could hear the responses of the audience live when you were blindfolded at home, and, magically, you were just there with everybody else!”

Ghost River has fielded requests for corporate gigs; they did a version for a Pat The Dog, a theatre creation centre in northern Ontario. And they’ve been working on a kids’ version of SensoryBox for Toronto’s Young People’s Theatre. “It’s in the research-and-development phase,” says Rose, who figured it was about time he created a show his own kids, six and nine, could enjoy.

They’ve mailed boxes to people in New Zealand, Serbia the Netherlands, Russia..… “There’s a sense of our community expanding beyond the city limits. And that’s exciting!”

In the end, the online world isn’t a threat to live theatre, Rose thinks. “Theatre-makers are the best content-creators in the world….How can we open ourselves to new possibilities?” And digital and live aren’t an either/or for theatre, he argues. “It’s really about more!”

Running: through April 10, in French