Got a couple of minutes? catch a film at the Play The Fool International Short (very short) Film Festival

Psst.… Wanna have fun, fast, on a blowy pandemic Sunday? I went to an international film festival this morning. And I saw all 12 jury selections, in their entirety, before my second coffee.

Surely the world’s only 24-minute festival of any kind, the Play The Fool International Short Film Festival is devoted to the fine (and infinitely amusing) art of clowning and physical comedy — never more welcome, I must say. Each of the films you’ll see is two minutes long, max. And though telling a complete, fully-formed story in 120 seconds is a lot harder than having duration at one’s disposal, the idea is evidently much too kooky (and/or crazily challenging) to be resistible.

The debut edition in September, part of the fifth annual Play The Fool Fest as it got re-thought by artistic director Christine Lesiak for online life in these pandemical times, attracted some 40 tiny gems from here, there, and everywhere. This time out, the film festival has its own identity and its own director, Shreela Chakrabartty, a film-maker  herself. And it drew a whopping 200 submissions. The jury whittled that number down to 80 (!) finalists. And the festival you’ll see if you have 24 minutes to fool around with reveals the 12 finalists — from here, across the country and the pond, the U.K., Paris, Rio de Janeiro, Tehran.

Clowns are wayward about strict classifications, as you’ll know if you saw the range of options in September. And that’s true in this second edition of the festival. Some clowns speak, others don’t. Some sport the classic red nose, others are dressed in formal evening wear. Some can be distracted into pleasure by tiny discoveries; others are steeped in existential Euro-gloom. For that matter, some are human and others are flowers. Or fish. 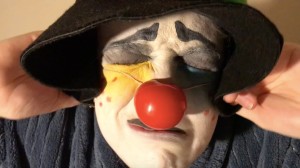 I’m here to report I had a blast with this dozen. And the beauty of this Play The Fool array is that in some way all the offerings address the surreality, the uncertainties, the absurdities, the assorted weirdnesses and terrors of the Now — clowns seem to be all about the immediate present. But thankfully it’s in elliptical or oblique ways. And there’s this: clowning in isolation is a quixotic undertaking in the first place; clowns are fed by audience interaction. And here we all are, stuck at home, eating out of our own fridges, stuck in our own minds.

Spaghettiman, starring Dayna Lea Hoffman (directed by the great clown mentor and guru Jan Henderson), is about life, death, and love. And it will confirm that the absurd and the tragic are first cousins, possibly siblings.

The coveted Red Nose prize, best in fest, is now the possession of a fun, very accomplished show called Show, from Rio de Janeiro. We meet a couple whose slumbers are continually invaded a flamboyant gallery of their alter-egos, upstagers all. The quarantine crazies? The Q word is never invoked.

It isn’t in Opéra dans mon salon, from Paris, the winner of The Fools’ Gold jury’s choice prize. It’s a very amusing film about a Parisian who goes to the opera, with all its trappings (including dozing off and intermission) in his own apartment.

The Golden Nose, awarded to the best of Edmonton, goes to Abby McDougall’s Outtshgh, in which we meet an insomniac clown, battling her own thoughts.

For those with even less concentration, there’s even a 60-second entry, from Bristol. Nick Hales’ animated Stay Home Stay Safe Stay Sane? stars a worker gradually going mad during lockdown. Eloquence in one minute.

It’s strictly BYORC (bring your own red carpet). And the dress code is, well, relaxed.

Find the line-up at playthefool.ca. Watching is free, but donations will make everyone concerned very happy.