Conjuring Patsy in concert, live at the Mayfield: A Closer Walk With Patsy Cline. A review. 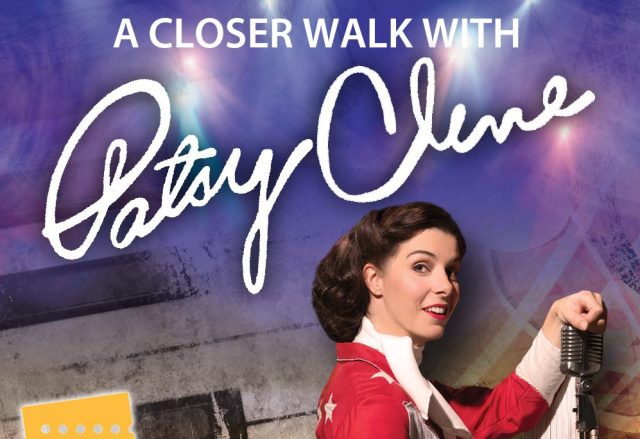 “Come on in and sit right down and make yourself at home.” The singing invitation comes from Miss Virginia Patterson Hensley of Winchester, Virginia, whose early-career name change is part of the show to follow.

She strides briskly onto the stage at the start of the musical entertainment that marks the Mayfield Dinner Theatre’s return to live action (with vaccine proof of vaccine requirement) after 18 months of stops, starts, plans and re-plans.

(Music! Live! It’s a treat. There’s no excuse for the Kenney government’s cruel and lunatic delay in implementing a vaccine passport. But I digress).

In the course of A Closer Walk With Patsy Cline, a hit 1991 bio-revue by the Canadian actor/director Dean Regan, you’ll hear a generous selection of some two dozen entries, hits, non-hits and cover tunes from the Patsy Cline songbook.  And you’ll hear them delivered by a terrific performer with charisma, a big lustrous voice and uncanny skill in using it: Sara-Jeanne Hosie, who’s been here as Patsy three time before now.

Hosie has the benefit of a great five-piece band (director: Van Wilmott) and really excellent sound. What she does not have, by way of theatrical benefits, is a script that gives Patsy a chance to speak for herself. This is ironic since the disjointed bits of real-life narrative provided by the DJ and all-purpose colourful character Little Big Man (Sheldon Bergstrom) seem to suggest Patsy wasn’t shy about doing just that in life, age 14 onward.

Anyhow, the point of A Closer Walk With Patsy Cline isn’t a closer walk with Patsy Cline. It’s a full-on Patsy Cline concert with trimmings. And given the musical values on display, that’s more than enough for your enjoyment over a Blue Moon of Kentucky featured cocktail.

In music and body language — and a succession of outfits that invariably include boots, designed by Pat Burden — Hosie, a musical theatre triple-threat with cred across the country, fashions a portrait of an iconic country singer whose star rose in the ‘50s and has never faded. Even as a teenager (“a feisty little lady” as Little Big Man says) she trots briskly onstage in her boots and prim ‘do, plants herself confidently in front of a mic, and just sends out her powerhouse voice.

In the contemporary world of glamorized ultra-choreographed pop-star country music, would Patsy have made it? “The big black hands on the clock/ Tell me it’s time to rock,” sings the old-young Patsy Cline, adding a few crisp knee-raises and hand gestures for good measure.

Patsy Cline hits like Walkin’ After Midnight, Sweet Dreams, Crazy show off the edges and angles of Hosie’s voice. She captures all the signature catches and slides, the way that “Always” and “good-byeeee” have at least three syllables. The familiar songs sound fulsome, musically and emotionally. And she’s backed up with expertly stylish contributions from the band.

Bergstrom, who’s an engaging performer, has his work cut out for him as the radio station DJ who, in classic revue fashion, provides the framework for the songs. It’s unreasonable to expect a musical revue to be a full biography or full-fledged jukebox musical, to be sure. But even by those standards, A Closer Walk With Patsy Cline seems a bit skimpy. Bergstrom has to work awfully hard with fragments about Patsy’s “big heart.”

The 22-year-old Patsy apparently turned down a gig once when a show producer “wanted Patsy but not her band.” She once went to Kansas City to do a benefit for someone named Cactus Jack she didn’t even know, because he was sick. Her first husband was “an oil and water marriage. “In 1957 she got a hit and lost a husband.”

Little Big Man supplements this random assortment with amusing period colour, including (over-extended) cornpone humour from a Grand Ole Opry comic and jingles for Ajax, the foaming cleanser, or Winstons that “taste good like a cigarette should.”

I know now that Mickey Mantle was the first professional baseball player to acquire a $100,000 contract. I found out that Vegas meant four shows a night seven nights a week for singers in the ’50s, and that Patsy Cline played Carnegie Hall, unprecedented for a female in her particular field of music. But I didn’t learn much about a country singer with the unusually mature-sounding pipes, who apparently didn’t even like the song Walkin’ After Midnight. I’m no expert on the life and works of Patsy Cline. But if the aim is “a closer walk,” it just doesn’t seem enough. “Sit right down” and think of this as a concert, and you’ll have a fine time.

The script includes one early foreshadowing of the 1963 plane crash that claimed the life of Patsy Cline at 31. The history of country music has ample warnings against flying in small aircraft in the hinterland during bad weather. Next up at the Mayfield (Nov. 9 to Jan. 23) is Buddy: The Buddy Holly Story.

A Closer Walk With Patsy Cline