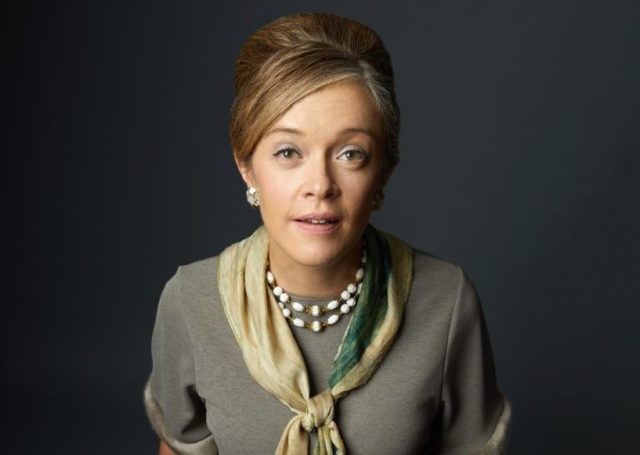 In the course of Fever Land, opening on the Varscona stage Friday, Betsy will find herself enmeshed in an illicit affair. And in Stewart Lemoine’s unclassifiably strange 1999 comedy, the routines of Betsy’s hitherto non-tumultuous life will attract the intervention of a couple of exotic other-worldly characters. The Erlking arrives from the Goethe poem that was set to music by Schubert; Myrtha Queen of the Willis from Act II of the ballet Giselle. It’s an unusual combination: 1966 Winnipeggers “and people who wear crowns and appear out of the mist,” as Lemoine puts it.

“I think of Betsy as an Alice in Wonderland,” says Jenny McKillop, the star of Teatro’s revival (the first since 2004), “getting to go on a wild ride….”

“She’s not very worldly, not malicious; she just doesn’t really understand the implications (of the affair).” In her first romantic entanglement since teacher’s college (and she’s in her mid-‘30s), “she’s just a gal trying to figure things out.”

McKillop’s Teatro debut was in Lemoine’s 2010 The Ambassador’s Wives, a murder mystery caper set in Monte Carlo, as a Canadian adventuress who’s inherited piles of money. And, as a member of the Teatro younger generation that includes Andrew MacDonald-Smith and Rachel Bowron among others. she’s been in many Teatro comedies since.

Teatro practice as an ensemble includes the passing down of plays generation to generation. As she did in Teatro’s signature comedy Pith! (in a sidekick role originated by Leona Brausen), McKillop inherits a Fever Land character played originally by Barbara Gates Wilson in 1999 and 2004. “It’s a little intimidating when you admire the actor so much,” she says. “I’m honoured; I’m excited. Big shoes to fill….” McKillop’s real-life husband Garett Ross has the role of the the choir director originally played by Jeff Haslam.

Betsy, thinks McKillop, joins a long series of Lemoine characters who “maintain a gentle energy while ready for a new experience.… I think it’s fun to think of someone who’s presented with something strange, and just deals with it.”

Those someones are the kind of characters that McKillop, who exudes a buoyant, appealing kind of sunny good cheer in person, often gets called upon to play. In Marvellous Pilgrims, for example, a Lemoine comedy of 2013, she was Honor, half of a pair of ‘30s adventurers who arrive at a remote mountaintop tea house to discover a piano and a tenor ready to sing. Honor is pleased, but not overcome by surprise at this development.

Lemoine says that his reason for wanting to revive Fever Land was that McKillop is a perfect Betsy. “The lead character is a pretty delightful character,” he says. “The audience immediately wants her for their friend.” And no matter what she drifts into doing, and with whom, supernatural or not, the audience is on her side. “Jenny,” he says, “is so instantly likeable….”

Fever Land wasn’t the first Lemoine play to invoke the name of his birthplace city. In The Glittering Heart (1990), Winnipeg was a place to leave. Which is exactly what Adele, a Winnipeg housewife did. Right after she served the classic roast ham with pineapple rings to her husband Harold, she announced she was leaving for Venice to become a famous courtesan.

Fever Land was the second. Winnipeg is where the play actually happens, in 1966. The signature cream cheese actually gets mentioned. And it’s where the Erlking and the Queen of the Willis tour iconic locations, like Rae and Jerry’s Steak House and the Eaton’s cafeteria.

The comedy revels in the particularities of Winnipeg that Lemoine discovered as a kid: the zoo in Assiniboia Park, say, or the Charterhouse, a motor inn where Lemoine’s Aunt Denise worked at the desk…. “We lived half a block from Portage Ave., and within walking distance of the Polo Park Shopping Centre.” The juxtaposition of real-life ‘60s Winnipeg and “people who wear crowns and appear out of the mist” as he puts it, gives Fever Land its distinctive tone.

Lemoine remembers the origins of Fever Land two decades ago. Once he’d decided that the romantic fortunes of a pleasant chorister would include interventions by the Erlking and Myrtha Queen of the Willis, both trailing the major musical cred that’s often a game-changer in his comedies, “the fantastical story kind of told itself,” he says. “O no, that sounded pretentious.. It was more ‘this is outrageous: I’ll do it!’”

In Schubert’s setting of Erlkönig, the singer takes on all the parts, including the narrator. Lemoine notes that if you’re having a Schubertiad at your house (no, really, it’s a thing), and doing a participation Erlkönig sing-out, four singers take the separate parts of a story about a father and son, and the Erlking “who presents them with an enticing alternate reality.… ‘Come, come with me’.” As for the Queen of the Willis, she’s the star of the Act II graveyard scenes in Giselle, “usually played by an older dancer who strides around, authoritatively.” In this revival, in the role originated by Leona Brausen, she’s played by Cathy Derkach

The other inspiration to which Lemoine points is the choir, in the play the weekly rehearsals of the Red River Chorale (in Winnipeg nomenclature, “everything is either Red River or Pembina”). In Edmonton “My mom sang in Richard Eaton Singers for years and years,” he says. And then when it eventually came time to re-audition, alas, “it went really badly. And that was that.” Mrs. Lemoine, incidentally immediately joined the Concordia Choir. So it all turned out fine.

The choir is an intersection, possibly battleground, for tensions, frictions, and relationships of various kinds,” says Lemoine. “What kind of earrings should be allowed, choosing a design for the new robes, how many rehearsals you can miss before you get kicked out….” In short, it’s a rich sort of theatrical possibilities.

And speaking of rehearsals, Belinda Cornish’s production has been doing that live (with masks and COVID testing every three days). And since Betsy is in every scene in the play McKillop says she’s tired by the end of the day, yes. but “exhilarated too,” not least by being back in the theatre (“I’m a serial optimist!”). And being in a play with one’s husband has practical advantages, she finds. “Garett and I can run lines together!”

Running: Thursday (in preview) through Oct. 10