‘Who were we before life got hold of us?’ Thoughts on Ayita at the SkirtsAfire festival 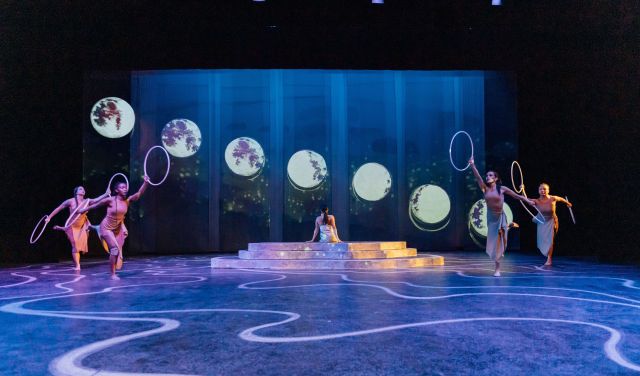 To walk into the Westbury Theatre these days is to find yourself in a world that’s mysterious but familiar, calm but in perpetual motion.

Whittyn Jason’s captivating design puts us in the centre of a wave or lost in a galaxy of stars. We’re splashed by an incoming tide or travelling through infinite space, as projections ripple across seven round cosmic bubbles.

Are they portholes into the great beyond? Are they microscopic atoms of tiny droplets of water? The strange and contradictory sense of being up close to Nature and a tiny speck in a vast universe, seems crucial to the experience of Teneil Whiskeyjack’s Ayita.

At the heart of this year’s 10th anniversary edition of SkirtsAfire is a production, directed jointly by Lebogang Disele and Sandra Lamouche, that speaks directly to the life purpose of a multi-disciplinary theatre festival designed to amplify the voices of women and non-binary artists — in this case Indigenous voices. And it will be fascinating to read what Indigenous commentators have to say about the piece.

In Danielle LaRose’s sound design, sometimes those voices seem to echo from the inside out; sometimes they speak directly from the three characters and the dancer chorus onstage. And their cultural sound track of Indigenous drumming and singing is provided by Mackenzie Brown.

“Who were we before life got hold of us?” That’s the question that ebbs and flows, and frames the dance theatre conceived by Whiskeyjack, a Plains Cree artist from the Saddle Lake First Nation. The arc of her story, which plays out mostly in movement, is the rediscovery of that “who” amid the struggles, trauma, and the wrenching losses that life deals out. There are universal resonances, to be sure,  but it’s an Indigenous journey that’s being chronicled. And it begins in violence: “the man that came from the land of the red went back to the stars.”

Three generations of Cree women intersect in the piece: Ayita (Whiskeyjack), an older woman (Christine Sokaymoh Frederick) and a younger (Janira Moncayo). And the self —  star of the question “who were we before life got hold of us?” — is connected to Nature, moving beyond rage and grief, the dark night of the soul, to a place of healing. “Grief has a way of breathing life back into you….” It’s not so much a creation story as a re-creation story. 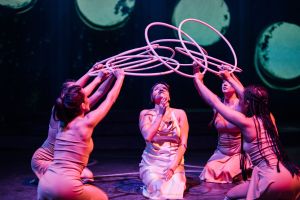 Lamouche’s choreography, which charts this course in scenes with the four expert dancers, makes strikingly original, poetic use of hoops, traditional in Indigenous dance. The performers move gracefully with them, emerge from them, focus through them, let them rise like speech bubbles. And in one memorable image, a dancer fashions them into angel’s wings.

The climax is a dramatic birthing scene, bathed in red, in which Ayita herself is reborn as an artist, from agony into joy. “Our wombs hold knowledge of the land and connect us to the stars…. On the other side is who you were always meant to be.”

That sense of possibility is what SkirtsAfire is all about.