Celebrating an Edmonton theatre season like no other: the Sterling Awards (online), led by The Color Purple and Titus Bouffonius

Edmonton theatre took its annual awards gala onto the digital stage Monday night for the first time ever, to celebrate a theatre season like no other. And a musical that chronicles the empowering four-decade journey of a poor Black girl — dealt the worst possible hand by the world around her in the early 20th century — proved the top choice of jurors as the 33rd annual edition of the Sterling Awards were presented online.

In a season abruptly curtailed in March by a pandemic and a theatre scene re-lit by an urgent acknowledgment of chronic racial injustice in our own world, The Color Purple, a 15-year-old musical powered by the spirit of Black Lives Matter, has renewed resonance. Of its five Sterling nominations, the Citadel/ Royal Manitoba Theatre Centre collaboration on the musical fashioned from the epistolary 1982 Alice Walker novel took away five awards — including outstanding production of a musical.

Kimberley Rampersad, the first Black woman ever to direct a professional production of The Color Purple, was voted outstanding director, alongside musical director Floyd Ricketts. Both the the leading and supporting role honours in the drama category, went to the production — to Tara Jackson for her knock-out star performance as much-abused Celie, and to the supporting performance of her cast-mate Janelle Cooper as the spirited and defiant young woman who plays a part in Celie’s growing awareness.  Jackson’s powerhouse delivery of the title number was a highlight of Monday’s digital celebration.

Of its nine nominations, Bradley Moss’s ensemble production took home three Sterlings, including one for Hunter Cardinal’s virtuoso double turn — ‘outstanding performance in a supporting role, comedy’ — as the “recovering kid” who plays the bouffon who plays two brothers, one the jumped-up Emperor and one a more laid-back amateur always a cue or two behind. Tessa Stamp’s costumes, gore magnets in the course of events and designed to reflect the multi-layered intricacies of characters playing characters playing characters,  garnered a Sterling, too.

Of the four gender-neutral performance Sterlings (last year’s awards innovation), three went to The Color Purple and The Society for the Destitute Presents Titus Bouffonius. The fourth, for ‘outstanding performance in a leading role, comedy’ went to Patricia Cerra for her high-precision comic turn as an exasperated party guest in Shadow Theatre’s premiere production of the Nick Green satire Happy Birthday Baby J.

Shortened though it was by more than a dozen productions, postponed or cancelled, the season had an impressive measure of premieres — witness a particularly competitive field of new-play nominees. In a roster that included plays by Ellen Chorley (Everybody Loves Robbie) , Nicole Moeller (The Ballad of Peachtree Rose), David van Belle (A Christmas Carol), and Jason Chinn (E Day), top new play honours went to The Blue Hour, Michele Vance Hehir’s fulsome small-town prairie tragedy, the third of her Roseglen plays. And Annette Loiselle’s SkirtsAfire premiere was also deemed outstanding independent production.

The theatre lockdown that has left the ever-ingenious performing arts industry struggling for its very survival, gave new meaning to Mr. Burns, A Post Electric Play, an off-centre apocalyptic assessment filtered through the gaze of pop culture by the American playwright Anne Washburn. The Blarney/You Are Here co-production directed by Andrew Ritchie, which unfolded in a series of three make-shift theatre spaces wrested from the Westbury Theatre, went home with two Sterlings. One was for Brianna Kolybaba’s tripartite set, the other for Mhairi Berg’s score. 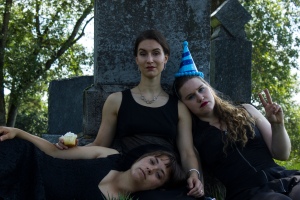 The theatre for young audiences awards both went to Gina Puntil’s production of Safe & Fair: Scene at Work, for Alberta Workers’ Health Centre.

The Fringe categories were dominated by Jessy Ardern’s cleverly site-specific Queen Lear Is Dead. It happened in a series of locations in a church at a memorial arranged by the Lear girls in honour of their mom, who didn’t get any ink in Shakespeare. Three Fringe Sterlings —  outstanding production, outstanding new work, and outstanding director (Valerie Planche) — went to that premiere. The Fringe performance Sterlings went to Candace Berlinguette (a co-creator of Reality Crack) and Jenny McKillop (You Are Happy).

Notable for its absence in the Sterling list, after seven nominations, was Catalyst Theatre’s boldly theatrical all-female new musical play The Invisible – Agents Of Ungentlemanly Warfare, inspired by real-life World War II history. And of its six nominations, Daryl Cloran’s hit musical version of As You Like It, a Citadel/ Royal Manitoba Theatre production which tag-teamed the Bard with the Beatles, came away with a sole Sterling, for Jonathan Hawley Purvis’s fight direction, which had the actors in a wrestling ring at the outset. Six, the snazzy Tudor pop-rock concert that came to the Citadel en route to Broadway, went on its merry olde way with one Sterling, for Tim Deiling’s lighting.

AND THE STERLING GOES TO…

Outstanding Production of a Play: The Society for the Destitute Presents Titus Bouffonius (Theatre Network)