It’s the theatre season, and you have options this weekend

Hey, there’s a Theatre Season (now, there’s a term that’s gotten a little rusty) going on in this town. There’s live theatre in your weekend — two openings Friday night alone — and you have options.

•We’ve had glimpses, in unexpected places (like Rundle Park at twilight). But finally, Edmonton audiences get to see a full-bodied play by Geoffrey Simon Brown — in a theatre. Pyretic Theatre premieres Michael Mysterious at La Cité francophone. Fierce and funny, it takes us into the fractious and fracturing heart of a family, and makes you wonder about what it means to have one and be home — all seen through the eyes of a mystery teenager. Is family something you make? Inherit? Spend a lifetime trying to shake off? Riveting. Patrick Lundeen’s kinetic Pyretic production runs through Oct. 24 at La Cité francophone. Have a peek at the 12thnight REVIEW here, and an interview with the director and playwright Brown here. Tickets: tixonthesquare.ca. 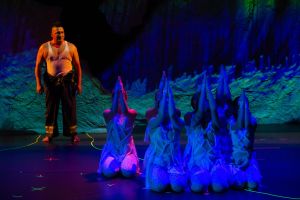 A “dark, multi-disciplinary comedy about a pipeline”? Really? Bears, Matthew MacKenzie’s bold, imaginative theatre-dance fantasia on our relationship with Nature and, really, the Trans Mountain pipeline, opens Friday in the city where it began. And this time it’s on the big stage, the Citadel’s Maclab. Check out 12thnight’s PREVIEW interview with the playwright here. MacKenzie’s Punctuate! production, starring the charismatic Métis actor Sheldon Elter, runs through Oct. 31. Tickets: citadeltheatre.com, 780-425-1820 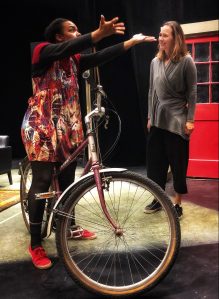 •At the Varscona, starting Friday, another new play from Belinda Cornish, the actor/playwright/director who’s both the co-artistic producer at Teatro La Quindicina and the artistic director of the indie Bright Young Things.

Hiraeth is named for an untranslatable Welsh word that has to do with undefinable longing — for something the eludes your grasp or that might not exist. The premiere production, under the Bright Young Things banner, is directed by the Vancouver Arts Club’s Rachel Peake. Playwright Cornish and director Peake are fresh from The Garneau Block, which finally opened on the Citadel’s Maclab stage after an 18-month Covidian delay. 12thnight had a chance to talk to them for this PREVIEW. Tickets: varsconatheatre.com. 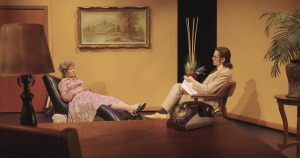 •If you’re not quite ready to venture forth, theatre will invade your home, and come to you online. There are three filmed Teatro comedies available for streaming through Oct. 31.

Lost Lemoine Part 1 is a sextet of little comic gems by resident playwright Stewart Lemoine, some dating back as far as the ’90s. A Second Round of Seconds: Lost Lemoine Part 2, and A Fit, Happy Life. The eight-actor ensemble  of first-rate comic actors for the Lost Lemoines is directed by the evidently indefatigable Cornish. A Fit, Happy Life directed by Cornish with playwright Stewart Lemoine, stars Mathew Hulshof as a very busy department store bed salesman, with Kristen Padayas as all his customers. Streaming passes: teatroq.com. 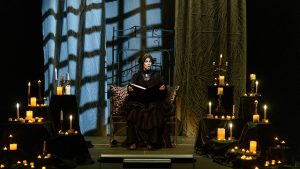 Kristin Johnston in We Had A Girl Before You. Photo by Ian Jackson, Epic Photography

•And in honour of the spooky season, sharpen your appetite for terror and dread by catching the digital version of Trevor Schmidt’s unease-making gothic thriller We Had A Girl Before You, which premiered live last November. Schmidt’s shivery production, beautifully lighted with sound to match, stars Kristin Johnston. It’s available for streaming at northernlighttheatre.com through Oct. 31. See the 12thnight REVIEW if you dare.