Here they come again…. Some of the country’s top musical theatre talent has a date Saturday night — at your place.

Toronto’s Musical Stage Company returns with a digital version of their hugely popular annual “signature concert.” For this 15th incarnation of UnCovered, hosted here by Catalyst Theatre, the six-person cast of artists, filmed in performance at Koerner Hall, presents the music of Dolly Parton.

As you’ll know if you had the fun of seeing last year’s concert, UnCovered: Notes From The Heart — which plumbed a repertoire from Leonard Cohen to Billie Holiday, Carole King to Bob Marley —  The Musical Stage Company has a highly entertaining way of letting musical theatre stars loose on the pop repertoire. The results are fascinating. 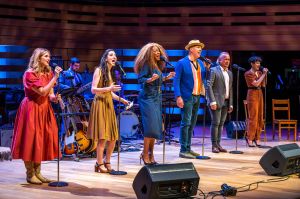 The cast of UnCovered: The Music of Dolly Parton, photo by Dahlia Katz.

For 2022, it’s hits by the queen of country (and COVID hero), reimagined in inventive original arrangements by the company’s musical director Reza Jacobs. And with it, the Toronto company again pairs with Catalyst, a theatre with its own highly original take on musical theatre, as we know from such hit productions as Frankenstein, Nevermore, Vigilante.

•In other theatre news, Die-Nasty, Edmonton’s award-winning improv comedy troupe, has bid adieu to the Stroganoffs, that fractious, treacherous, angst-ridden Russian clan. The deluxe improvisers of Die-Nasty return Monday night — and every Monday night through March 31 — with the second half of their live improvised season at the Varscona: Murder at the Off-Whyte Lotus Hotel. The notably quick-witted Edmonton murder mystery novelist Janice MacDonald co-directs. Tickets: varsconatheatre.com.

•Shadow Theatre has delayed this week’s performances of their current production The Mountaintop till Tuesday, due to positive COVID tests. Tickets (and ticket adjustments) for the show, which imagines in an encounter with a motel housekeeper Martin Luther King’s last night on earth, are available at shadowtheatre.org. Check out the 12thnight review here.